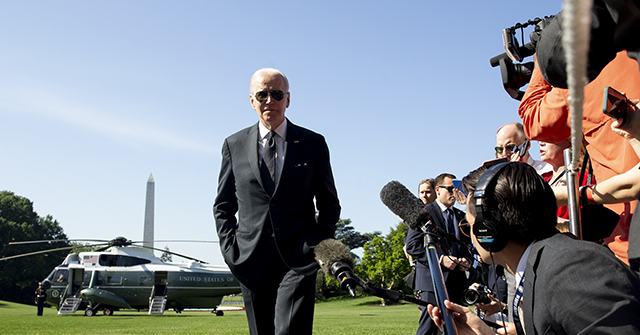 The establishment media are lukewarm on a potential second term of President Joe Biden.

The establishment media are lukewarm on a potential second term of President Joe Biden.

Over the weekend, the Hill published a story about potential Democrat presidential candidates if Biden retracts his statements and decides not to run for a second term. The story promoted Vice President Kamala Harris, Transportation Secretary Pete Buttigieg, and Sens. Elizabeth Warren (D-MA), Amy Klobuchar (D-MN), and Bernie Sanders (I-VT) as legitimate contenders.

“There are doubts he will follow through on his plans because of his age — Biden would be 81 in November 2024 — and because of the brutal political headwinds he and his party are now facing,” the article noted. “Biden’s approval ratings have sunk to the mid-30s in some polls.”

FiveThirtyEight titled a story on Friday, “Americans Are Unusually Lukewarm About A Second Biden Term,” which claimed “some Americans don’t believe” Biden will seek a second term, citing polling data:

And a Wall Street Journal poll conducted from March 2-7 found that more than half (52 percent) of registered voters don’t think he’ll run again in 2024, while only 29 percent think he will run again. (Nineteen percent were unsure.) A second Biden run isn’t that popular, either. According to an AP/NORC poll conducted from Jan. 13-18, 70 percent of Americans don’t want the president to run in 2024. Even Democrats are lukewarm about the idea.

FiveThirtyEight also said an alternative candidate to Biden should be more diverse and someone perceived strong enough to defeat a Republican nominee:

Perhaps they’d prefer someone who better represents the party’s growing diversity, or someone who is perceived as having a better shot at defeating the Republican nominee in 2024. After all, Biden’s approval ratings are low and his support has eroded among young voters, Latinos, and Black voters in particular. Those voters might be dissatisfied with Biden’s inability to deliver on the sweeping promises he made at the beginning of his term. Or they might just be afraid he can’t win.

VanityFair wrote an article that stated, “Democrats are already feeling out their options” for 2024. The article conveyed that if Biden doesn’t run, the Democrat party does not have a true leader and would be in “complete fucking chaos” because Harris is not seen as a great candidate:

If Biden does not run, whether for political or personal reasons, what then? “Plan B,” says Cornell Belcher, a pollster and adviser on both of Barack Obama’s successful runs for the White House, “is complete fucking chaos in the Democratic primary.”

…
Yet Harris’s first year as V.P. was rocky. The administration saddled her with two highly difficult policy issues—southern immigration and voting rights—and has given Harris little room to burnish her image. “She’s been a good trouper,” says Charles Phillips, cochair of Black Economic Alliance. “My hope is she gets something that’s more mainstream, and visible, that she can get her arms around and take credit for.”

Biden reportedly told Barack Obama in April he is running for a second term because he believes he is the only person who can defeat Donald Trump. “I believe he thinks he’s the only one who can beat Trump. I don’t think he thinks there’s anyone in the Democratic party who can beat Trump and that’s the biggest factor,” a source familiar with the Biden and Obama conversation said.

Biden’s chances of making good on his reported promise to Obama perhaps mirrors his job performance. Only 34 percent on Sunday approved of Joe Biden’s job performance, while 55 percent disapproved. Biden’s lowest approval rating was in April at 33 percent.