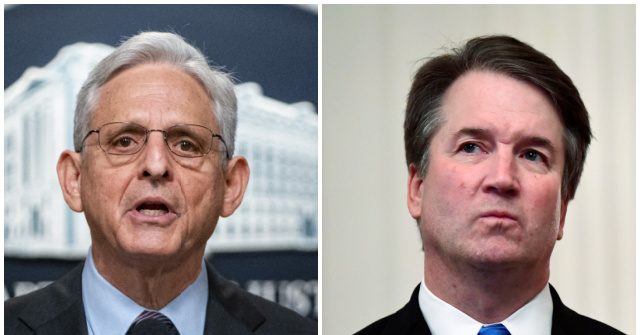 Merrick Garland has done little to protect Brett Kavanaugh despite working with him for ten years on a federal court, Carrie Severino said.

Carrie Severino, president of the Judicial Crisis Network, said on Thursday that Attorney General Merrick Garland did little in his capacity as head of the U.S. Department of Justice  to prosecute criminal threats against his former collegue, Justice Brett Kavanaugh.

Garland was a federal judge on the U.S. Court of Appeals for the District of Columbia Circuit between 1997 and 2020, including seven years as the court’s chief judge. Kavanaugh served as a federal judge alongside Garland on the same court between 2006 and 2018.

“What’s so flabbergasting to me is that Merrick Garland was a federal judge,” Severino remarked on Friday’s edition of the Breitbart News Daily podcast with host Alex Marlow. “He served with Justice Kavanaugh for a decade. I don’t understand why we’ve seen in him — as attorney general — really just allowing the most radical liberal voices to just run ramshackle over all of what the Department of Justice’s real priorities ought to be.”

Federal officials charged Nicholas John Roske, a 26-year-old man from California, with attempted murder on Wednesday for allegedly seeking to assassinate Kavanaugh for political reasons, including the accused’s stated objection to a leaked draft opinion from the Supreme Court overruling Roe. v. Wade. Left-wing protesters remained outside of Kavanaugh’s home in Chevy Chase, MD, after Roske was arrested and charged.

Severino highlighted the Justice Department’s (DOJ) refusal to charge protesters outside of Kavanaugh’s home. Jonathan Turley, a law professor at Georgetown University, wrote that “such protests can be viewed as crimes” according to particular interpretations of 18 U.S.C. 1507, under which “it is a federal crime to protest near a residence occupied by a judge or jury with the intent to influence their decisions in pending cases, and this case remains pending.”

“I get that maybe they don’t want to make martyrs of these people in front of the justice’s home,” Severino speculated as to the rationale behind the DOJ’s refusal to prosecute protesters outside of Kavanaugh’s and other justices’ homes. “So I can see maybe this is part of the strategy.”

She concluded, “This is a serious issue, and by ignoring it this long, it’s just grown in magnitude. . … Merrick Garland is really the only person that has really actually condemned some of this, but even so, it’s been very, very slow in coming, and I think we haven’t seen actual action on the part of the Department of Justice to say, ‘Hey guys, you’re now on notice that we’ve let you walk around here, so far. We’re going to be starting to prosecute. So please leave, or we’re going to be arresting you.’ … It’s not just saying, ‘These laws are on the books,’ but, ‘We’re not going to enforce them.’ That is not a good way to go about law enforcement.”

The Breitbart News Daily podcast is available for listening and download via Apple Podcasts, Google Podcasts, Spotify, and Amazon Music.