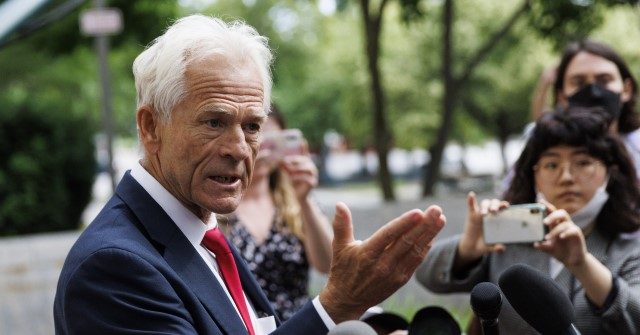 The FBI placed former White House economic adviser Peter Navarro in  attempted assassin John Hinckley Jr.’s jail cell after they arrested him for being in contempt of Congress.

Federal authorities arrested Navarro on Friday after a grand jury indicted him for contempt of Congress. Navarro told reporters outside the courthouse that the arresting officers put him in Hinckley’s old cell. Hinckley was recently released after serving more than four decades in prison following his failed assassination attempt on former President Ronald Reagan.

Navarro blasted the FBI for waiting to arrest him until he attempted to board a plane.

“They intercepted me gettin’ on the plane and then they put me in handcuffs, they bring me here. They put me in leg irons. They stick me in a cell.”

— Former Trump adviser Peter Navarro on being charged for contempt of Congress for defying a January 6th Committee subpoena. pic.twitter.com/GOee9R3GUB

“Instead of coming to my door, where I live — which by the way is right next to the FBI — instead of calling me and saying, ‘Hey, we need you down in court, we’ve got a warrant for you.’ I would have gladly come,” Navarro said. “What did they do? They intercepted me getting on the plane. They put me in handcuffs. They bring me here. They put me in leg irons.”

He then explained that the arresting officers made it a point to place him in Hinckley’s cell.

“They stick me in a cell — by the way, just a historical note, I was in John Hinckley’s cell. They seemed to think that that was like an important historical note. That’s punitive. What they did to me today violated the Constitution.”

Navarro was held in contempt of Congress in March, along with former White House communications aide Dan Scavino, after the two were accused of refusing to testify based on false claims that they had not tried to cooperate with the January 6 committee.

Navarro plans to represent himself on the contempt charges instead of hiring an attorney to do the job for him. He is also suing the January 6 committee in federal court, arguing that the committee is encouraging him to violate executive privilege and Constitutional separation of powers.