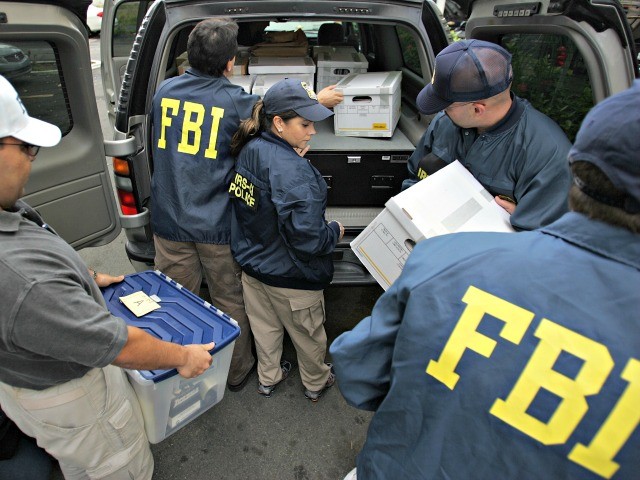 According to reports, agents obtained McDonald’s cell phone “reportedly as part of an investigation into the fake elector scheme initiated at the end of the 2020 presidential election,” according to 8 News Now. In 2020, six Nevada electors cast symbolic votes for Trump in the wake of the controversy over Biden’s victory, as the Democrat, according to official figures, won the state by less than three percent:

#BREAKING: FBI agents have served a search warrant on Nevada’s top GOP official as part of the investigation into the fake elector scheme, sources tell the @8NewsNow I-Team’s @gknapp. https://t.co/5I3gJr1Kxj

“A second search warrant was issued for state party secretary James DeGraffenreid, who also signed the document, but FBI agents could not locate him Wednesday, sources told Knapp,” according to the outlet.

The list does not end there, either. On Wednesday, agents also searched the home of Trump-era Justice Department official Jeffrey Clark, who reportedly pushed letters to states to consider overturning their election results, urging them to investigate claims of voter fraud.

“The new era of criminalizing politics is worsening in the US,” he said, later adding that the Clark is being targeted because he “saw fit to investigate voter fraud.”

“This is not America, folks,” Vought, who also served as the Office of Management and Budget director under former President Trump, said.

“The weaponization of government must end. Let me be very clear. We stand by Jeff and so must all patriots in this country,” he added:

Jeffrey Clark’s home in Virginia searched – former DOJ Environmental who aspired to be Trump’s Acting Attorney General to aid Trump in weaponizing DOJ to overturn 2020 election. Unclear whether a search warrant executed but reporting by NYT says it was federal authorities.

The Feds’ law enforcement activity comes as the Democrats’ partisan January 6 hearings continue. Famed conservative talker and author Mark Levin warned that it would “go down in history as a dark mark on the American political system.”

However, polls indicate that the committee’s investigation is not very popular among the American people, as less than ten percent say they are following the hearings “very closely,” according to an ABC News poll released this week. What is more, survey data shows that Americans trust Republicans more than Democrats to protect democracy.

The recent wave of law enforcement activity comes three weeks after Feds arrested former White House economic adviser Peter Navarro for contempt of Congress, refusing to cooperate with the January 6 committee. According to Navarro, authorities failed to read him his Miranda rights and also failed to provide him access to his attorney.

“The committee came at me with their full force,” Navarro told Breitbart News Daily during an interview this month. “I’m in an untenable situation. I don’t have the power to waive the [executive] privilege. So, what did they do? This is the tragedy here in this country.”

“They colluded passively or explicitly with Joe Biden and the White House, who writes me a letter saying, ‘You don’t have immunity, and you’re not covered by privilege,’ meaning that Biden was effectively attempting to strip me of testimonial immunity and President Trump of his right to executive privilege,” he continued, referring to the committee as a “kangaroo court.”