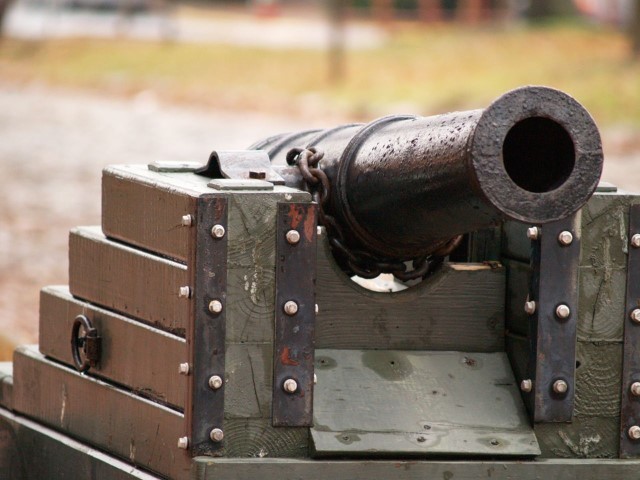 A cannon that may pre-date the Revolutionary War is seen in Wilmington, Delaware. (Jeffrey Kontur/Flickr)

Joe Biden’s pro-gun control talking points are at odds with the standard applied to Biden’s family. In 2021, Hunter lied to obtain a weapon in 2018 by failing to disclose he had a drug problem, the New York Post reported. Hunter has never been charged with wrongdoing with regard to that lie, and the weapon has disappeared.

In a 2019 text message, Hunter revealed the FBI had gotten involved in the case. Speaking about Hallie Biden, his former sister-in-law-turned-lover, Hunter said she threw the gun into a grocery store dumpster in Wilmington, Delaware:

She stole the gun out of my trunk lock box and threw it in a garbage can full to the top at Jansens [sic]. Then told me it was my problem to deal with.

Then when the police the FBI the secret service came on the scene she said she took it from me because she was scared I would harm myself due to my drug and alcohol problem and our volatile relationship and that she was afraid for the kids.

Another string from Hunter’s texts adds: “And I freaked when I saw it was missing 10 minutes after she took it and when she went back to get it after I scared the s–t out of her it was gone which led to state police investigation of me. True story.”
In 2021, the establishment media reported that the FBI was heavily involved in Hunter’s reckless gun incident, which if true, would be corrupt, but also would contradict Joe Biden’s political talking points on gun control. Politico reported:

But a curious thing happened at the time: Secret Service agents approached the owner of the store where Hunter bought the gun and asked to take the paperwork involving the sale, according to two people, one of whom has firsthand knowledge of the episode and the other was briefed by a Secret Service agent after the fact.

The gun store owner refused to supply the paperwork, suspecting that the Secret Service officers wanted to hide Hunter’s ownership of the missing gun in case it were to be involved in a crime, the two people said. The owner, Ron Palmieri, later turned over the papers to the Bureau of Alcohol, Tobacco, Firearms, and Explosives, which oversees federal gun laws.

The Secret Service says it has no record of its agents investigating the incident, and Joe Biden, who was not under protection at the time, said through a spokesperson he has no knowledge of any Secret Service involvement.

This is not the first time Biden has erroneously claimed that people couldn’t purchase cannons at the time the Second Amendment came into being. Outlets as varied on the political spectrum as the Washington Post, Politifact, and Breitbart News have debunked that talking point.