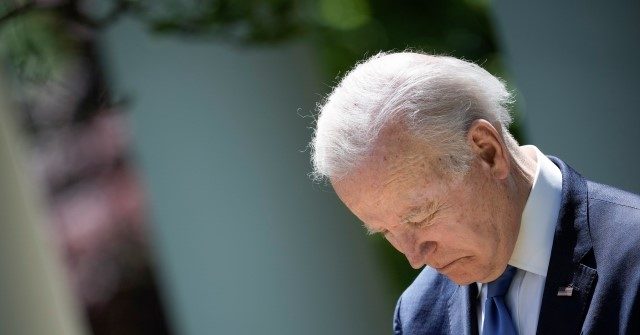 “With the biggest single driver of inflation being Putin’s war against Ukraine, @POTUS has taken action to blunt the impact of Putin’s Price Hike for families,” the White Hosue falsely claimed on Monday.

The American public is not buying what the Biden White House is selling.

Just 11 percent of Americans think Putin is to blame for high energy prices, according to a poll of 1,000 U.S. likely voters taken by Rasmussen between June 16 and June 19. Biden has also sought to blame oil companies and refiners for high prices but just 29 percent find that convincing.

By the far the largest share of Americans—52 percent—say it is Biden’s energy policies that are to blame for high gas prices.

Biden has nominated at least two opponents of fossil fuel to key financial regulation posts—although those nominations were ultimately defeated. On the campaign trail, Biden said a number of times that he would end fossil fuels and stand athwart fossil fuel expansion. One of his first actions as president was to cancel the permits needed for the Keystone Pipeline. Biden increased the royalty rate—essentially, a tax rate—on oil production on federal lands by 50 percent this year, the first hike in 100 years.

It’s only now that high gas prices have become a political liability for the president that his administration has pivoted to claiming the Biden administration is not opposed to fossil fuel extraction.

Eighty percent ( of Republicans think Biden’s policies are most to blame for rising fuel costs. Most troubling for Biden, 54 percent of voters not affiliated with either major party blame Biden.

Among Democratic voters, only 24 percent blame Biden, 46 percent blame major oil companies, and 20 percent blame Putin. So Biden’s “Putin price hikes” message is not even resonating within his own party.

The issue of gas prices has increasing salience with voters.  Ninety-two percent of voters view the rising price of gasoline, home heating oil and other petroleum products as a serious problem, including 68 percent who consider rising fuel costs a Very Serious problem. In April, 83 percent said rising petroleum prices were a serious problem.

October 3, 2022
Biden Washes His Hands of Gas Prices Now That They’re Going Back Up