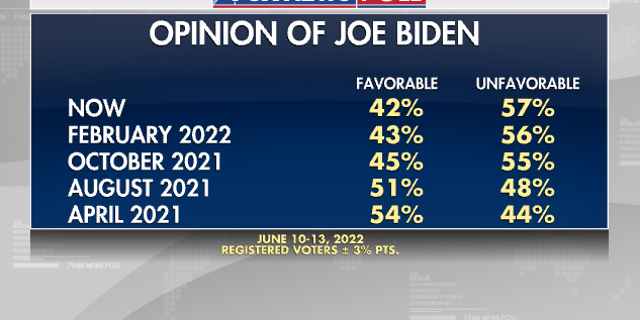 Not only is he at a high unfavorable rating with voters overall, but he also reaches new levels of disappointment among his core voters:  60% of voters under age 30, 55% of Hispanics, 53% of women, and 18% of Democrats all see record negative ratings.

His negatives are also at the highest point of his presidency among liberals (28%) and moderates (59%).

“This is a very tight spot for Biden,” says Democratic pollster Chris Anderson, who conducts the Fox News Poll alongside Republican Daron Shaw. “If he moves to stabilize his ratings on the left, it could easily lead to more erosion in the middle and hurt his reelection prospects. But if he doesn’t address his problems on the left, his ratings could really crater.”

HUGH HEWITT : PRIMARY ELECTIONS ARE A ‘WARNING SHOT’ TO BIDEN AND THE DEMOCRATIC PARTY

Former President Trump is also underwater, with a 44% favorable rating compared to 55% unfavorable.  At this same point in his presidency, in June 2018, Trump was at 45% favorable vs. 53% unfavorable. 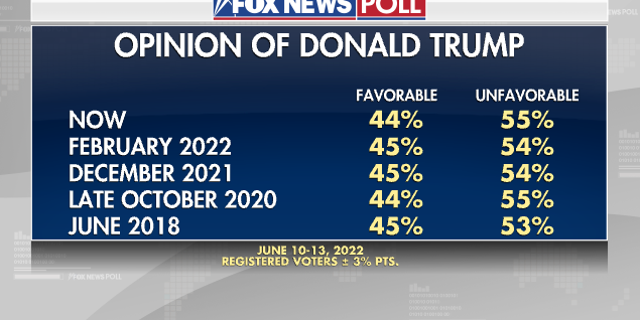 And while partisans are about equally favorable toward their side’s guy (81% of Democrats for Biden and 83% of Republicans for Trump) their dislike of the other side is stronger:  9 in 10 Democrats have a negative view of Trump, and Republicans are similarly unfavorable towards Biden. 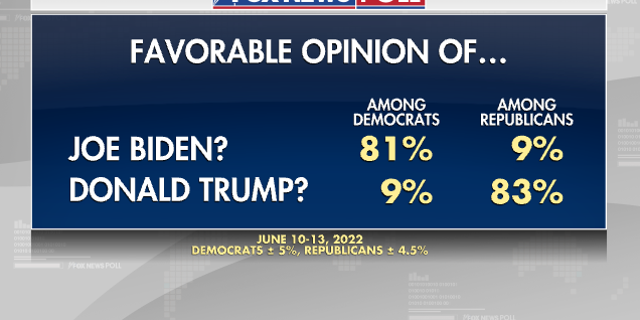 “Part of Biden’s strength as a politician is that he has always been viewed as ‘a good guy,’” says Shaw. “But the data suggest his image has taken a hit as views of his administration’s performance have soured. I’m not sure how he gets that good will back.”

Biden’s job performance also suffers on all issues tested: more disapprove than approve of the job he’s doing by 48 points on inflation, 38 points on the economy, 27 points on guns, 23 points on border security, and by 10 points on his response to Russia’s invasion of Ukraine.

The poll, released Thursday, also asked voters’ views about the National Rifle Association, and after a recent spate of gun violence, more view the NRA negatively (47%) than positively (42%) by a 5-point margin.  These assessments are unchanged compared with those offered three years ago (the last time the question was asked) in August 2019, shortly after mass shootings in El Paso, Texas and Dayton, Ohio. 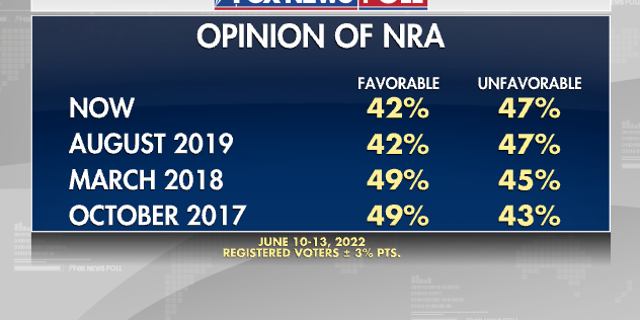 Harris is underwater, with 39% viewing her favorably vs. 56% unfavorably, for a net of -17 points. 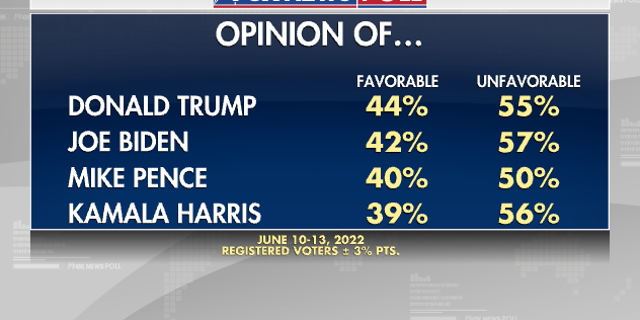 Republicans (34%) are almost twice as likely to have an unfavorable view of Pence than Democrats (19%) are of Harris.

Conducted June 10-13, 2022 under the joint direction of Beacon Research (D) and Shaw & Company Research (R), this Fox News Poll includes interviews with 1,002 registered voters nationwide who were randomly selected from a national voter file and spoke with live interviewers on both landlines and cellphones. The total sample has a margin of sampling error of plus or minus three percentage points.