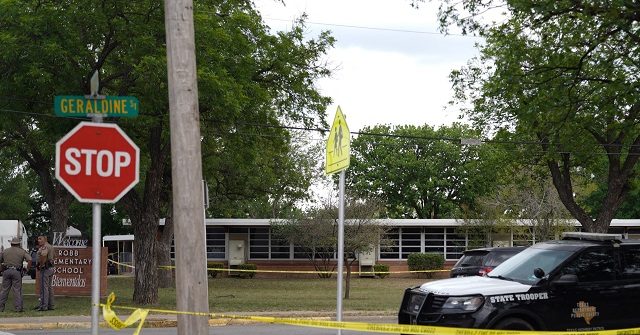 An active shooter situation in Uvalde, Texas, on Tuesday, left 18 children and one adult dead. A hospital report also states that 14 children and at least one adult are being treated by hospitals in Uvalde and San Antonio. The shooter was killed by responding police, the governor added.

An active shooter situation in Uvalde, Texas, on Tuesday, left 18 children and one adult dead. A hospital report also states that 14 children and at least one adult are being treated by hospitals in Uvalde and San Antonio. The shooter was killed by responding police, the governor added.

Border Patrol agents, BORTAC special response team, and Texas Highway Patrol troopers are on the scene to assist local first responders. The situation unfolded at approximately 11:50 local time when shots were initially heard in the vicinity of the elementary campus.

UPDATE 4:15 p.m.: KSAT reports that Uvalde Station Border Patrol agents responded to the shooting and provided immediate medical care to those injured in the school.

Texans across the state are grieving for the victims of this senseless crime and for the community of Uvalde. Cecilia and I mourn this horrific loss and we urge all Texans to come together to show our unwavering support to all who are suffering. We thank the courageous first responders who worked to finally secure Robb Elementary School. I have instructed the Texas Department of Public Safety and the Texas Rangers to work with local law enforcement to fully investigate this crime. The Texas Division of Emergency Management is charged with providing local officials all resources necessary to respond to this tragedy as the State of Texas works to ensure the community has what it needs to heal.

UPDATE 3:40 p.m.: From a press conference on Tuesday Governor Abbott described the circumstances of the shooting:

The shooter was Salvador Ramos, an 18-year-old male who resided in Uvalde. It’s believed that he entered into the Robb Elementary School in Uvalde with a handgun, and he may have also had a rifle, but that is not confirmed according to my most recent report. He shot and killed, horrifically, incomprehensibly, 14 students and killed a teacher. [the shooter], he himself, is deceased, and it’s believed that responding officers killed him.

By 12:15 local time, an active shooter was still reported on site.

No formal disclosures of victims have been given as of press time.

Uvalde Police noted that at 1:06pm local time, the suspect shooter was in custody.

Photos from our @FoxNews photographer at Robb Elementary School in Uvalde, TX.
Uvalde Mayor Don McLaughlin tells me the shooting happened a block away from the school, then shooter ran to school. He and DPS tell me one person shot. Awaiting further info. pic.twitter.com/xttZ5gzK8K

Victims from the shooting are confirmed to be in local hospital care.

Parents are now clear to report to the reunification site to pick up children. This was delayed to account for all potential victims and survivors, per the school’s Facebook page earlier in the day.

KENS CBS 5 reports that hospital officials say a 66-year-old woman is in critical condition. A child is also being treated, but the child’s condition is not reported at this time. Uvalde Memorial Hospital reported two deaths and 15 injuries. The two deaths are reported to be children who arrived dead at the hospital, KSAT reports.

This is a rapidly developing story. Updates will be posted as received.

Randy Clark is a 32-year veteran of the United States Border Patrol.  Prior to his retirement, he served as the Division Chief for Law Enforcement Operations, directing operations for nine Border Patrol Stations within the Del Rio, Texas, Sector. Follow him on Twitter @RandyClarkBBTX.

Bob Price serves as associate editor and senior news contributor for the Breitbart Texas-Border team. He is an original member of the Breitbart Texas team. Price is a regular panelist on Fox 26 Houston’s What’s Your Point? Sunday-morning talk show. Follow him on Twitter @BobPriceBBTX and Facebook.