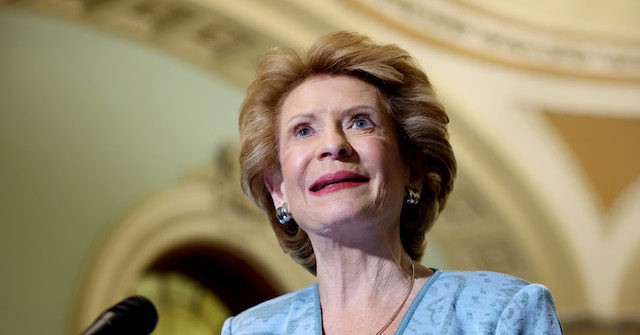 Democrat Senator Debbie Stabenow (D-MI) said that gas prices “didn’t matter” to her because she drives an electric vehicle while millions of Americans feel the financial burden of record-high gas prices.

Democrat Senator Debbie Stabenow (D-MI) said that gas prices “didn’t matter” to her because she drives an electric vehicle while millions of Americans feel the financial burden of record-high gas prices.

“On the issue of gas prices, after waiting for a long time to have enough chips in this country to finally get my electric vehicle, I got it and drove it from Michigan to here this last weekend and went by every single gas station and it didn’t matter how high it was,” Stabenow said.

“I’m looking forward to the opportunity for us to move to vehicles that aren’t going to be dependent on the whims of the oil companies and the international markets,” she added.

“On the issue of gas prices, I drove my electric vehicle from Michigan to here last weekend and went by every gas station and it didn’t matter how high it was.”
pic.twitter.com/VWSd9BJ3kk

Although the 25-year D.C. veteran has “enough chips in this country to finally” get an electric vehicle, a $56,437 car does not make financial sense for the typical Michigan resident, where the average household income is $59,234, according to the U.S. Census Bureau.

Electric Vehicles can also be inconvenient for families who take road trips or people who commute to work, as the Wall Street Journal’s Rachel Wolfe detailed in an article titled: “I Rented an Electric Car for a Four-Day Road Trip. I Spent More Time Charging It Than I Did Sleeping.”

The Michigan Senator’s remarks came on the same day gas prices hit a record high for the tenth consecutive day. The average price of one gallon of gas is $4.91. However, Michigan’s average is more than 20 cents higher than the national average, at $5.17 per gallon, according to AAA.

Gas prices have more than doubled since Biden’s inauguration last January when Americans paid $2.39 per gallon on average.

Stabenow joins other Democrats in the Biden administration who are calling for Americans to switch to high-priced electric vehicles to avoid the woes of “Putin’s price hike,” as Biden calls it.

While Biden continues his war on American energy by taking measures like canceling the Keystone pipeline and prohibiting new drilling on public lands, the administration is seemingly taking no action to reduce gas prices.

White House National Economic Council director Brian Deese claimed there was “no amount of domestic production we can do to reduce” rising gas prices. Biden’s Energy Secretary, Jennifer Granholm, said she expects gas prices to be “rough” for the remainder of the year.