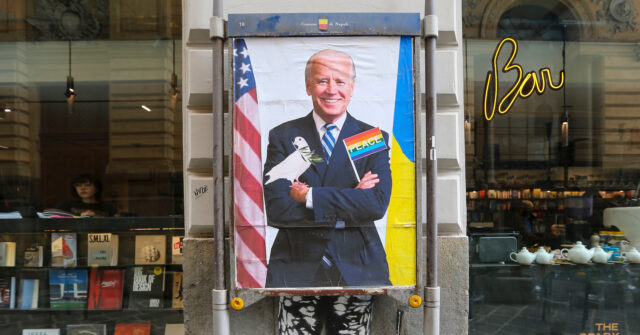 Western leaders have "misplaced optimism" in their ability to defeat Russia in Ukraine and oust Vladimir Putin from power, a German Member of the European Parliament (MEP) told Breitbart London.

Western leaders have “misplaced optimism” in their ability to defeat Russia in Ukraine and oust Vladimir Putin from power, a German Member of the European Parliament (MEP) told Breitbart London.

In an exclusive interview, Dr Gunnar Beck, MEP for the Alternative for Germany (AfD) party, said that there is a lack of calls for peace in Ukraine in Europe and America because politicians have made the miscalculation that Ukraine can prevail and that the Russian people will turn against Vladimir Putin.

“There is a lot of triumphalism right now, talk of Russia being pushed back to its pre-conflict borders and I think that’s misplaced triumphalism. What we need in Ukraine, above all, is a genuine compromise peace as soon as possible,” Dr Beck told Breitbart London.

“I don’t have a crystal ball, but my sense is that it is a miscalculation and if it is, I rather doubt that the Russian population will cease to support President Putin if the conflict is increasingly perceived there in terms of not just a conflict with Ukraine but with the whole of the West.”

‘Mr Scholz, Tear Down This Wall’ – Zelensky Channels Reagan to Call Out Germanyhttps://t.co/Wpg9aoG7kW

The German MEP claimed that while the main focus among the legacy media, and indeed among the political class in the West, has been on the losses suffered by Russia, “Ukraine’s losses in manpower and equipment are much larger than Russia’s and Ukraine can ill afford such loss of life.”

“We’ve seen the exodus of millions and millions of Ukrainians, many of whom will never come back, large loss of life among Ukrainian men, widespread destruction. The country will be ruined if the conflict continues much longer, so in my view, peace is the absolute priority and of course I would like to see the German government do more in this regard, rather than simply adopt a very inflexible line in relation to Russia.”

The German politician said that Western leaders should be seeking a compromise that leaves “Ukraine intact” but also grants some concessions to the Russians so that Putin can actually agree to such a deal.

To date, there has been little movement among Western leaders towards peace, with former U.S. President Donald Trump and Hungary’s Prime Minister Viktor Orbán being notable exceptions.

Dr Beck went on to predict that there will be growing “dissatisfaction” among the peoples of the European Union as the conflict continues the wreak havoc on their economies, and that there will likely be increased protests against the continuation of the war, with his country in particular perhaps facing the brunt of the damage due to its over-reliance on Russian energy.

“I don’t think that Europeans in Central and Western Europe are really prepared for the kind of economic and possibly further sacrifices their own governments appear to be willing to accept,” he said.

It remains to be seen if such sentiment among the public will do anything to sway leaders to the cause of peace. Indeed, in September the German Foreign Affairs Minister, Annalena Baerbock, said that her government would be willing to continue to subsidise and support the Ukrainian war effort for years, no matter whether the voters in Germany approve or not.

“We stand with Ukraine as long as they need us,” the Green Party politician said, adding that this pledge comes “no matter what my German voter thinks.”

Those taking the German government to task over the ongoing gas crisis have been branded the “new enemies of the state” by one government minister in the country.https://t.co/O1DNe8KJdF