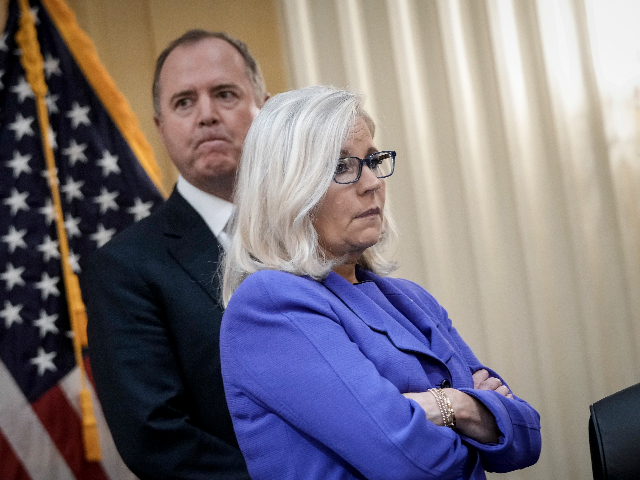 “You’re better off to play the Powerball” than for the 2020 election projection to have been wrong on November 7, 2020, Stirewalt told the partisan January 6 Committee.

“Our Decision Desk was the best in the business, and I was very proud to be a part of it,” Stirewalt stated. “By the time everyone was losing their minds over this call, we were … moved on to other states.”

When asked who won the election, Stirewalt emphatically stated, “Joseph Robinette Biden Jr., of the great state of Delaware.”

(L-R) Rep. Adam Schiff (D-CA) and Rep. Liz Cheney (R-WY) look on during a break in a hearing of the Select Committee to Investigate the January 6th Attack on the U.S. Capitol in the Cannon House Office Building on June 9, 2022 in Washington, DC. (Drew Angerer/Getty Images)

Stirewalt was the Fox News member in charge of calling the state of Arizona for President Biden, which many say was projected too early to be accurate. Stirewalt defended the early call, claiming Fox News had “a better set of data” than CNN or MSNBC.

“Our poll in Arizona was beautiful, and it was giving just what we wanted it to do and it was cooking up just right,” he added. “We knew it would be a consequential call … because it was one of five states we were watching … Trump’s chances were very small and getting smaller,” Stirewalt said.

Stirewalt suggested many at Fox News were “losing their minds” that Arizona was called early but said his focus was calling the winner of the next state.

“We looked around the room, everybody says, ‘Yeah.’ And by the time we found out how much everybody was freaking out and losing their minds over this call, we were going to try and call the next state,” he said.