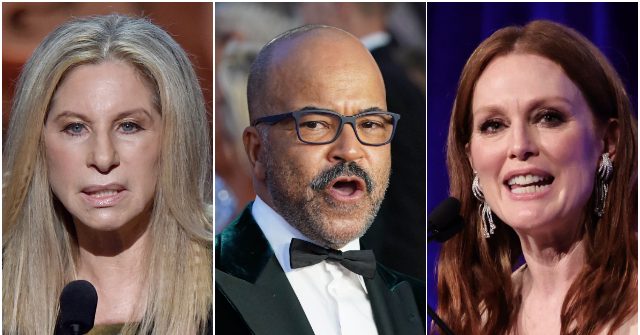 Hollywood celebrities are freaking out over the Supreme Court's 6-3 decision on New York's proper cause requirement for concealed carry permits, ruling that the state's law is unconstitutional.

Hollywood celebrities are freaking out over the Supreme Court’s 6-3 decision on New York’s proper cause requirement for concealed carry permits, ruling that the state’s law is unconstitutional.

SCOTUS “has put the desires of the gun extremists over the safety of our children,” Julianne Moore said on Instagram.

The ruling represents “a middle finger to New York,” Whoopi Goldberg said on ABC’s The View.

On Thursday, the Supreme Court struck down New York’s law requiring gun applicants to demonstrate “proper cause” to obtain a permit to carry a concealed handgun outside the home.

In a majority opinion written by Justice Clarence Thomas, the court said New York’s law was inconsistent with the Second Amendment.  “We know of no other constitutional right that an individual may exercise only after demonstrating to government officers some special need,” Justice Thomas wrote.

Thomas suggested other states with similar laws could be impacted by the court’s ruling.

“In 43 States, the government issues licenses to carry based on objective criteria,” he wrote. “But in six states, including New York, the government further conditions issuance of a license to carry on a citizen’s showing of some additional special need.”

New York-resident Julianne Moore, who is one of the entertainment industry’s biggest gun control activists, accused the high court of prioritizing “gun extremists” over children.

In a country reeling from gun violence, the GOP extremists on the Supreme Court now overrule the rights of local governments to try and protect citizens. Truly a disgraceful ruling while the Justices themselves want protections against people with guns.

The Supreme Court has just made death by firearms more convenient.

Broadcast News star Albert Brooks suggested that the Supreme Court is out of touch with popular sentiment.

This morning the Supreme Court ruled 6-3 that Americans can carry concealed weapons without any rules. Can we chip in and buy them a television set?

When will enough be enough? How many more people need to die? https://t.co/cMYWgjR9i8

This is sickening. We are a broken nation. https://t.co/B3yvd5A5Mm

MGM’s No Time to Die star Jeffrey Wright was also clearly unhappy with the ruling.

Except not outside the home of a Supreme Court justice, um, just two weeks ago. Big no-no. Ain’t life funny? https://t.co/fX6At5JkvN

Open carrying weapons in NY? This will be the Wild West. https://t.co/7hY04asHqS