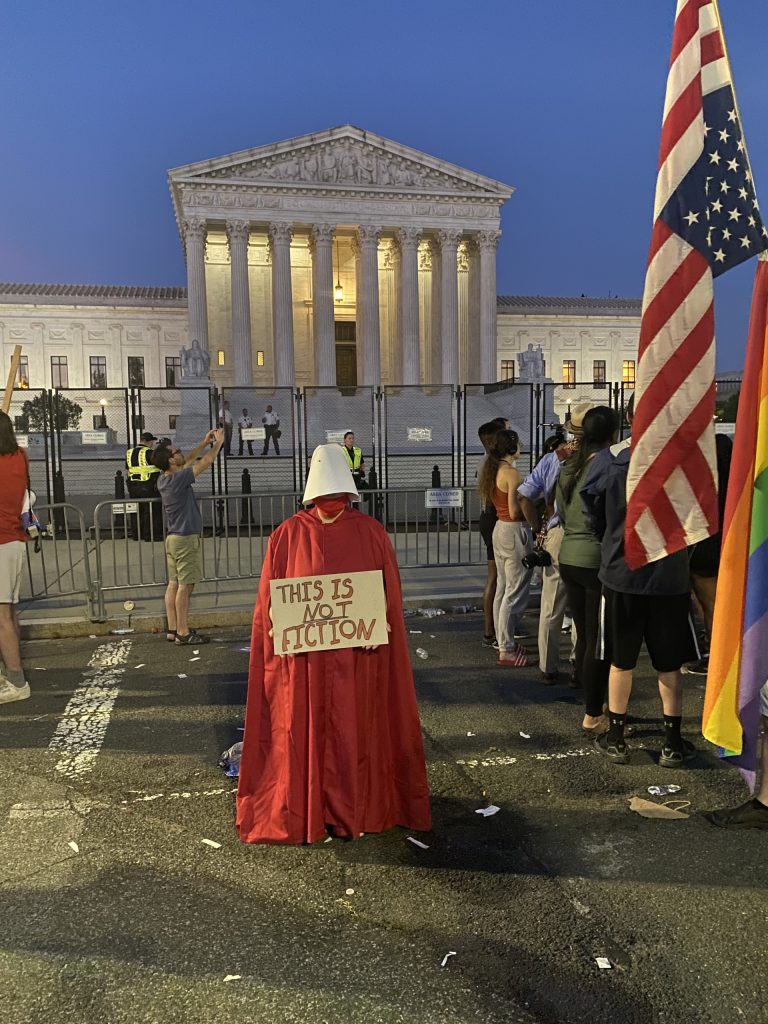 Capitol Police in riot gear disperse from outside the court, with one protester suggesting they “should’ve done that on January 6th” amidst criticism from the crowd as officers file back towards the U.S. Capitol Building pic.twitter.com/u7lxiZvN1T

Protesters break through a police line in Washington, DC.

Protesters at #SCOTUS move in on Capitol riot police as they were about to make a formation on the street. pic.twitter.com/K0RWeXwTQ5

Traffic in Los Angeles forced to a standstill as pro-abortion protesters mobbed the freeway.

Traffic at a complete standstill pic.twitter.com/NPUAl3xEqS

TONS of helicopters up over downtown LA where protesters have marched in large crowds and a smaller group ended up here in front of the federal courthouse.

At one point protesters stopped traffic as they marched down one of the busiest freeways in LA #RoeVsWade pic.twitter.com/c91L1edjq4

Protesters in Tucson filled the streets before running into police as they tried to enter the highway.

Protesters at #SCOTUS move in on Capitol riot police as they were about to make a formation on the street. pic.twitter.com/K0RWeXwTQ5

Things getting intense outside of SCOTUS between pro-choice and pro-life protesters. @fox5dc pic.twitter.com/6kq20VHyx8

Protesters in Reno blocked the streets chanting “Abort the Court!”

“Fuck Fox News!” protestors chant as they pass Fox News headquarters in NYC tonight during a protest against #SCOTUS overturning the right to abortion. Some birds got liberated too. pic.twitter.com/tHnqPzcdIM

In Seattle, Antifa groups tried to shatter windows before they were confronted by security

VIOLENCE INCREASING: Antifa militants attempt to shatter windows but security prevented them and they ran back into the crowd.

LAPD officers prevent the group of pro-abortion protesters from proceeding on a street. They curse out the officers. pic.twitter.com/9gbYQKu7z9

Protesters also pushed past police officers in DC to advance to the Supreme Court.

Police attempt to stop the crowd from advancing towards the Supreme Court, protesters push past and make their way along 3rd Street pic.twitter.com/bCj32H4YLw

There’s…a lot going on at the pro-abortion protest in Dallas. None of it is good. pic.twitter.com/JcH9PJsakp

In Los Angeles, thousands of protesters began to shut down the streets and even stormed the 101 Freeway, blocking traffic.

protest marchers have shutdown the 110 fwy in #DTLA pic.twitter.com/AtrOe1Q66c

Abortion right protesters face off again LAPD officers at Los Angeles Street and Aliso Ave near the entrance to the 101 freeway. pic.twitter.com/zqeW0HwOiJ

Breitbart News reporters are currently outside the Supreme Court monitoring the protests as thousands gathered around Washington, DC.
Watch below:

Groups of people wearing masks, goggles, and all-black were spotted arriving at the Supreme Court at dusk, some of them holding black umbrellas.

“Every city, every town, burn the precinct to the ground!” chants from protesters out here in DC pic.twitter.com/uRwwdhajmD

An American flag was burned on the street in protest.

An American flag is set ablaze in the street next to a protest sign reading ‘F*** YOU MPD’ pic.twitter.com/1etOyY7HLY

After setting a small fire to an American flag in the middle of the street in DC, the Antifa crowd chanted “Burn it down!” pic.twitter.com/2U8TV6VGLy

Several signs featuring vulgar language were carried by protesters chanting obscenities about the Supreme Court and their decision.

Signs at the pro-choice protest in front of the Supreme Court this evening pic.twitter.com/XuZvTiCa0Q

Examples of the familiar Handmaid’s Tale costumed cosplay were on full display.

In case you want a glimpse at the demonic mindset on display at the Supreme Court today. pic.twitter.com/Jkine2omyv

In DC, the RiseUp4Abortion group began screaming “People in the streets work!” and “Where the f*ck has” voting got us?” and “We have to be in the streets!” prompting cheers from fellow protesters.

The Frederick Douglass Memorial Bridge in DC was closed earlier in the day after a protester scaled it to hoist a protest flag.

The flag says Don’t Tread On My Uterus. pic.twitter.com/ChIuYKGV1N

In DC, pockets of pro-life supporters were spotted in the streets including this group from Auburn University. 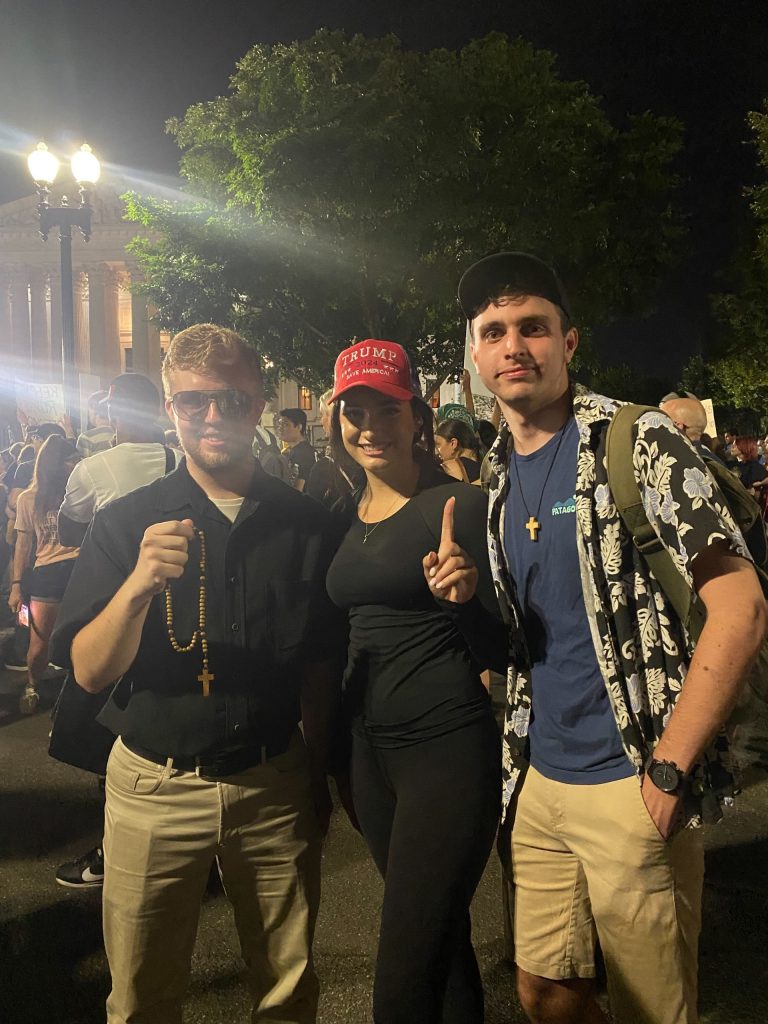 In Detroit, protesters marched down the streets shouting, “Right to life your name’s a lie! You don’t care if people die!”

This might give you a sense of how many Detroiters are out here protesting the Supreme Court’s repeal of Roe v Wade pic.twitter.com/mH25HiqlYF

In Milwaukee, pro-abortion protesters chanted “F*ck Joe Biden, according to a local reporter filming on the ground.

One of the chants from abortion rights protesters in Milwaukee is: “F— Joe Biden.”

In downtown Dallas, protesters closed down some of the streets voicing their hatred for Texas Gov. Greg Abbott.

“F*ck the constitution” protestors yell outside the Federal building in Dallas, TX

So we are here now. Take note pic.twitter.com/MYXVKSTWIK

“F*ck Gregg Abbott” something the left and right in Texas can agree on as we shutdown traffic in downtown Dallas pic.twitter.com/SP8swz4WMk

Others twerked on cars and in the streets to show their support for abortion.

“Shakin dat a** so we can kill our babies, proud to be a hoe and not to be a ladies” pic.twitter.com/tyTCEbDXhr

Thousands of protesters also gathered outside the Federal Building in Seattle where Antifa black blocs were spotted in the crowd.

View of the Seattle protest from the Wells Fargo balcony. pic.twitter.com/DPewDHl2s5

Antifa black bloc is in the crowd. #RoeVsWade pic.twitter.com/TiWHaNugPm