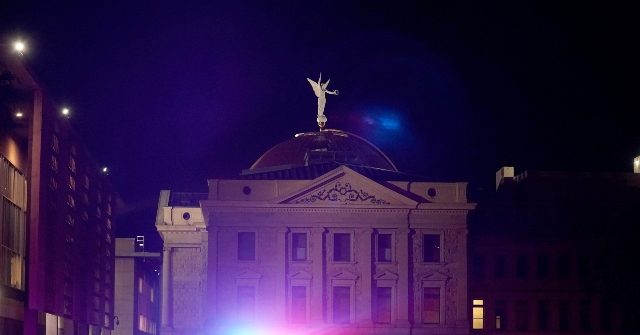 Pro-abortion rioters attempted to storm the Arizona capitol building in Phoenix while the state's senate was in session.

Pro-abortion rioters attempted to storm the Arizona capitol building in Phoenix while the state’s senate was in session.

Pro-life Republican state Senator Kelly Townsend, who was inside the senate building, tweeted members of the Senate were “being held hostage inside the Senate building.” Townsend said during one period the senators could “smell teargas and the children of one of the members are in the office sobbing with fear.”

“I expect a J24 committee to be created immediately,” she added.

Breaking news out of Phoenix, Ariz.:
Pro-abortion protesters surrounded the capitol in an attempted insurrection & began pounding on the windows. Law enforcement has used tear gas to disperse the crowd. https://t.co/EwOItLf4Fq

Some Arizona state Democrats were displacing blame from the protestors, who were trying to enter the capitol by breaking through security, Townsend also said. “’This is a public building, and they wouldn’t let them in,’” Townsend overheard one Democrat say.

MAGA Senator Wendy Rogers, who was also with her colleagues, said for safety reasons, the senators left the senate chamber and “assembled to take the tunnel to the House.” But the crowd was dispersed and the senators went back to the Senate.

Two journalists on the ground confirm the protesters were pounding on the windows. Lawmaker Wendy Rogers says the mob was threatening to break them. #Insurrection https://t.co/CBkWiytX1L pic.twitter.com/URojXbBqPz

After the senate went into recess without concluding its business, the Arizona Department of Public Safety announced that tear gas had been successfully deployed and protestors had moved on to vandalize monuments at Wesley Bolin Plaza.

“Troopers deployed gas outside the Senate building after protesters attempted to break the glass,” the Arizona Department of Public Safety stated. “The crowd then moved to the Wesley Bolin Plaza where some monuments were vandalized. Gas was deployed again to disburse the crowd.”

Video from inside the Capitol https://t.co/B7eW2ARXke

The riot outside the Arizona capitol building was among many protests throughout the nation after the Supreme Court overturned Roe v. Wade Friday. Protests occurred in Seattle, Washington, DC, Los Angeles, Tucson, New York City, Reno, and Dallas.