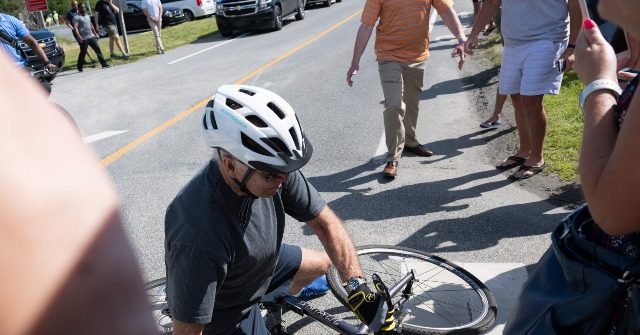 President Joe Biden reportedly fell off his bike in Rehoboth, Delaware, on Saturday morning after getting his foot stuck.

President Joe Biden reportedly fell off his bike in Rehoboth, Delaware, on Saturday morning after getting his foot stuck.

“POTUS fell down from his bike on his way back from the trail,” Reuters reported. “Got up and said ‘I’m good.’ He said his foot got stuck.”

It is not known whether the seventy-nine-year-old sustained any injuries from the fall or how the president’s foot became stuck.

NOW – Biden falls off bike on Delaware ride with Jill.pic.twitter.com/iULl1ieDGS

This is not the first time Biden has had a physical mishap. In 2021, Biden stumbled twice and then fell while climbing a stairway to board Air Force One at Joint Base Andrews Base.

Biden did not receive medical attention after the fall.

Some observers fear that Biden’s physical state may be representative of his mental state. Thirty-eight Republican lawmakers, along with Donald Trump’s former White House physician and now-Rep. Ronny Jackson (R-TX), wrote a letter in February to Biden, demanding that he take a cognitive test for fear that he may have Alzheimer’s disease.

Noting Biden’s “changes in mood and personality” and “forgetfulness,” the lawmakers said Biden’s cognitive ability has been declining and “is not just a recent trend” but has become more apparent “over the past two years.”

It is unknown whether Biden has undergone cognitive testing.

Fifty-four percent of adults think Biden is not mentally sound enough to serve as president. Just 29 percent of Americans believe President Joe Biden will pursue a second term in 2024.