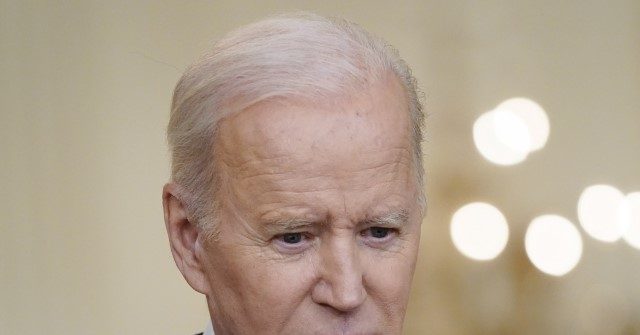 The White House repeated that President Joe Biden did plan on running for reelection in 2024, despite growing questions about his age and economic record.

The White House repeated that President Joe Biden did plan on running for reelection in 2024, despite growing questions about his age and economic record.

White House press secretary Karine Jean-Pierre fired off a message on social media about the president’s political plans for the future.

“To be clear, as the President has said repeatedly, he plans to run in 2024,” she wrote on Monday evening.

To be clear, as the President has said repeatedly, he plans to run in 2024.

Earlier Monday, Jean-Pierre tried to ward off questions about the president’s future political plans by alluding to the Hatch act.

“I cannot talk about elections, I cannot be a political analyst from here, or the midterms or anything like that including 2024,” she said during the White House press briefing when asked by a reporter about Biden’s political future.

“I can’t say more than that,” she replied.

Biden and his allies repeatedly defend the president, arguing he is the only Democrat capable of beating former President Donald Trump in a rematch.

But the president’s lousy approval ratings and constant missteps have Democrats concerned about him leading the party into the next election.

If Biden runs again, he would be 86 by the end of his second term.
Reports in the New York Times over the weekend and in Axios on Monday speculated on the president’s age and cited growing concerns about Biden’s political future among Democrats.

In March 2021, Biden laughed off questions about running for reelection during a press conference.

“The answer is yes,” Biden said. “My plan is to run for reelection. That’s my expectation.”

In December 2021, Biden repeated himself in an interview with ABC News, citing “fate.”

“Look. I’m a great respecter of fate. Fate has intervened in my life many, many times. If I’m in the health I’m in now — I’m in good health — then in fact I would run again,” Biden said.

Biden said in March he would be lucky if Trump ran for president in 2024.

“I’d be very fortunate if I had that same man running against me,” Biden said during a press conference in Brussels, referring to Trump.

Biden also reportedly told Obama his plan is to run for reelection in 2024, according to reports in April.