Here's what all that money is for. (Hint: Most of it's for our own government agencies.)

Two weeks ago the Biden Administration proposed a $33 billion support package for Ukraine. After de-linking COVID-related funding that had managed to latch itself to the proposal, the cost was reduced to just $40 billion. Let’s see what’s in there.

“H.R. 7691, Making emergency supplemental appropriations for assistance for the situation in Ukraine for the fiscal year ending September 30, 2022, and for other purposes,” is very short and disturbingly vague. As of this writing, only a draft copy is up here.

What does this bill tell us? $67 million for the DOJ’s asset forfeiture program makes it looks like these folks have bitten off more than they can chew. Asset forfeiture, which can take up to 10 years to finalize, requires that items in federal custody not deteriorate in value. Managing a super-yacht costs about 10% of the purchase price per year. A yacht valued at $90 million was seized in Spain, at $300 million in Fiji, at $578 million in Trieste, at $735 million in Germany, and so on. Take out, say, 75% for staffing, food, and cruising fuel, and the government is left with $42.5 million for one year’s upkeep on just these four.

$15 million allocated for military personnel costs, but just $37,500 for Navy, $675,000 for Marines, and $1,590,000 for Air Force. So, our training and other operations are expected to be land-based. Too bad about Russia’s continuing attempt to control the Black Sea coastline and use the Mediterranean as its naval superhighway. The military operations and maintenance budget is just shy of $18 billion, including a little less than $9 billion for replenishing stock, training expenses, and reimbursement to other countries for their assistance to Ukraine. What operations; how maintained; which countries? We don’t know; the bill doesn’t say. Congress, however, has directed the Secretary of Defense to prepare plans for the expenditure and transfer of these funds, to be approved by Congress. In any case, it looks like we’re going to shoulder some of the defense costs of NATO countries once again. Sorry, 45.

Missiles, weapons, ammunition, and other procurement comes in at $1.774 billion, on top of the $800 million already spent. The White House was very specific on what we’ve already funded. What will we be funding? Who knows? The bill doesn’t say.

Military R&D is slightly less than $500 million. Research and development—doesn’t that take years? Close to $15 million for DOD health programs and capitalization rounds out the nearly $19.8 billion in total military spending.

$2 million to the Nuclear Regulatory Commission for salaries and expenses. Uh-oh. Hope this is needed only for inspecting and advising on damaged power generation facilities.

$900 million to the Department of Health and Human Services for refugee support, mostly to be passed through qualified NGOs. What’s a qualified NGO? The bill doesn’t say. Persons paroled into the United States under this bill must pass security and law enforcement background checks. Why are we treating these poor victims of war so much more harshly than the self-selected beggars at our southern border? If we required proof of identity and passing security screening before being allowed across that border we might not have as much use for the word “chaos” as we do today.

$54 million to the CDC to help with public health in Ukraine and among its displaced population.

$18.946 billion for State and USAID, including $5 million for their Inspectors General. Well, of course. Fully fund the IGs now to avoid having to wait too long after the first reports of fiscal irregularities arise. 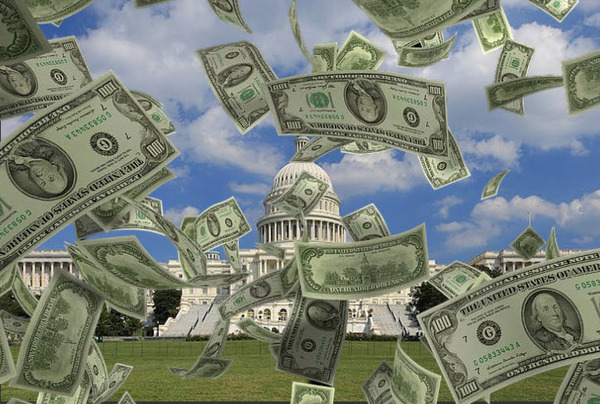 $110 million of this is for embassy construction and security. Are we replacing hotel rooms in Lviv with a permanent consulate facility? $100 million is for nonproliferation and de-mining work. I’m sorry, what? We’re sending more than $2.5 billion worth of weapons into a two-country conflict but just a paltry $100 million for de-weaponizing the region? Give me a break, give us all a break!

$400 million to investigate Russia’s war crimes and to combat human trafficking. How will we categorize the forcible relocation of Ukrainians to Russia? Will we be able to return them to their homes? Or simply beat our breasts over their misfortune?

Now we come to looser money, harder to audit, easier to misplace. $4.348 billion, via NGOs, is for international disaster assistance, including combatting human trafficking. Why is this in there twice? And to the same agency? This is to meet humanitarian needs like food and shelter in Ukraine and other countries affected by the conflict. There’s a ripple effect to this war that over the next several months may well affect most countries on earth. Pretty broad mandate, wouldn’t you say?

Here’s the cash—$8.766 billion for economic assistance to Ukraine and others, with less than 10% for food assistance. Given the expected negative impacts of lower wheat, sunflower oil, and agricultural chemical exports to the developing world this year — like famine, starvation, and increased child mortality – perhaps this percentage might be larger. Another Arab Spring, anyone? Perhaps restoration of Ukraine’s energy sector will gobble up some of those funds. If so, Hunter Biden’s and Paul Pelosi’s time there may have been well spent.

$4 billion is for foreign military assistance, in addition to that provided under DOD programs, for Ukraine and countries impacted by the situation there. Depending on how the war goes, rebuilding Ukraine’s military infrastructure may be difficult. Maybe Congress knows something we don’t. Only after the bill is passed are State, USAID, and Treasury required to present to Congress an action plan for the money, updated every 60 days, for its approval. Seems like a separation of powers problem here. Funny that the Dems control all three branches of government yet they don’t trust each other to do their jobs.

Half a billion for the European Bank for Reconstruction and Development and $150 million for food security complete this section.

We’re putting $20 million into the wheat reserve and another $52 million into Treasury for Ukraine’s needs. The last little bit is a year’s salary to the widow of Alaska Representative Don Young who passed away earlier this year. This is a customary expenditure.

Most of these funds are to cover our government’s activities and expenditures on behalf of Ukraine, her people, and other impacted countries. I don’t doubt some is important, nor do I doubt that the Senate will pass it with nary a whimper. Seems like we just went through a couple of rounds like this with covid funding.

Is this the best we can do? Why isn’t Congress demanding answers from our senior diplomats and policymakers on how this conflict can be cooled? It’s likely otherwise to spill over us like a river of hot magma. Let’s pray this funding is effectively used, wisely spent, and that this war ends soon with as little loss of life and livelihood as possible.