The Democratic Party, fronted by a rasping demagogue, now seeks to revive its fortunes by attacking the Second Amendment.

A Demagogue Lashes Out – American Thinker<!—->

With his presidency in a steep, self-inflicted decline, Joe Biden has evidently decided the best way to revive his fading political fortunes is to blame half the country for garish episodes of nihilistic criminal violence as he crouches like a leering ghoul behind the bodies of recently murdered children. In a typically simple-minded, shallow, and one-dimensional speech, delivered with the usual feigned exasperation and ill-supported, misdirected accusations and demands, Biden sought to position himself and his party as the obvious choice to voters whose anger and indignation might (he hopes) be insufficiently slaked by whatever legislation his party manages to pass in the coming days and weeks over the objections of his political adversaries. Make no mistake: Biden’s speech was a campaign maneuver designed to set up his political opponents for attack ads and, as with so much of what Biden says and does, it was despicable.

There can be little doubt that Biden could use a distraction. The Biden administration has shown itself to be incompetent, irresponsible, and (on its best days) hopelessly adrift. Having reversed many of his predecessor’s policies (to the nation’s detriment) out of blind spite, Biden effectively reinstalled and rearmed the Taliban (unintentionally, perhaps, but with such a staggering display of ineptitude as to provoke Putin’s mad dash into Ukraine). Biden’s asinine energy policies — policies he obstinately refuses to modify — significantly hamper the U.S. economy by effectively strangling domestic energy production. These policy choices are so clearly irrational as to constitute an act of deliberate economic sabotage, sabotage inflicted upon the nation to gratify a small band of green energy fanatics. The southern border has been effectively abolished, exacerbating all manner of criminal activity (well beyond mere mundane illegal entries.) Most recently, the Biden administration failed to act in time to head off a national baby formula shortage. In coming days, we can look forward to worsening inflation, continuing food shortages, rolling blackouts, and a possible Chinese attack on Taiwan.

But in the Oval Office, there is hope. If only enough voters can be coached to resent the Second Amendment and to hate those who in response to scripted pleas of “Enough!” say “Not so fast — let’s do something that might actually work without undermining a fundamental right” — then perhaps Biden’s declining political fortunes may be reversed. A bizarre (though unsurprising) electoral strategy; the Democrats seem incapable of attracting voters via anything other than overheated calls for revenge. Such vulgar hatemongering is unworthy of a president, though par for the course for Biden. If Biden were serious about addressing the nation’s problems, he would work to establish a basis for bipartisan cooperation rather than using a national address to tar and feather his political opponents, but one suspects this is well beyond his capabilities and out of step with his character — or rather lack thereof.

Biden may be spent, viscous, and dull, but thanks to an obliging national media, he and his allies are not without considerable resources. A media that mindlessly parrots accusations of “white supremacy” and “systemic racism” on cue now eagerly steps forward to gin up public hysteria over “assault weapons ” and “weapons of war.” These are, of course, phantoms of the Democratic political imagination — terms of political abuse, pejorative definitions invented to scare a deliberately misinformed public into acceding to (if not demanding) the eradication of a seemingly obvious danger.

Semi-automatic firearms (those “assault weapons” and “weapons of war” the Democrats seek to abolish) are civilian firearms designed with a cosmetic similarity to military arms. They do not function as automatic weapons and, as such, they 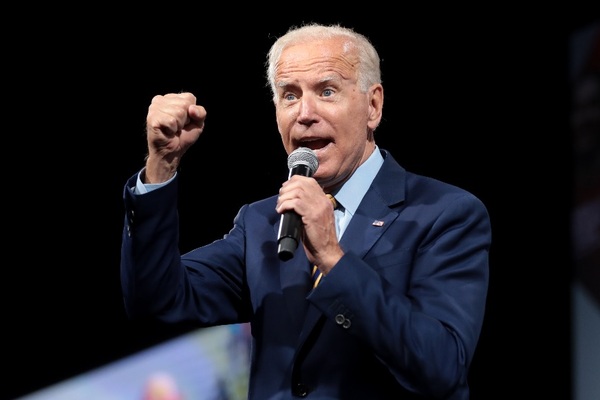 are not issued to any army on the planet as a standard battlefield weapon. If firearms that are not deployed in combat are “weapons of war,” then kitchen knives are “combat slicers” and civilian Humvees are “war wagons.” The definition is meaningless. Its purpose is to misinform, and this is done with a view to scaring the public into gutting the Second Amendment.

Any firearm that falls into the wrong hands poses a danger to others. This is obvious and uncontroversial, and no one would deny the importance of doing all we can as a society to keep firearms out of the hands of criminals and the mentally ill, but in seeking to impose a blanket ban on arbitrarily defined firearms, the Democrats seek to legitimate the notion that no firearm should find its way into civilian hands under any circumstances without express government approval. Given the arbitrary, imprecise, and ultimately meaningless nature of the definition of the firearms to be banned, one is compelled to ask: What is to prevent the eventual broadening of the definition, and with it, the scope of the ban? The public is encouraged to believe that the firearms targeted for elimination constitute a distinct class of items that can be readily distinguished from others, when in reality the ban could cover anything to which a political hack might choose to assign a scary name.

As we have noted elsewhere, gun control (or, as it has now been somewhat cleverly rebranded, “common sense gun safety reform”) reduces itself upon analysis to a hodgepodge of misdirected simple-minded non solutions, and these “solutions” are always rooted in stupidity, dishonesty, or a combination of the two. Worse yet, these “reforms” invariably scapegoat and punish the law abiding while having little to no impact on the criminal element (a segment of our society now empowered and emboldened by bail reform, reduced policing, and “equity” obsessions in the courts — all toxic distortions promoted by the Democratic Party).

The Democratic Party, the political organization fronted by a rasping demagogue that now seeks to revive its fortunes by attacking the Second Amendment, needs to be held accountable in November for a great many things: its destructive promotion of racial animosity, its support of violent riots, its habitual excusing and promotion of criminality, its hobbling of the American economy, its reckless rearming of the Taliban, its abandonment of the Southern border, and its manifest contempt for, and hostility to, the average American. We are in for a debate on the Second Amendment, and let’s by all means join and win it, but in the end, let us not be distracted, and let us ensure that the Democratic Party receives its just deserts at the polls in November.