We are now experiencing the inevitable results of giving power to men and women who don't deserve it.

After over two centuries, the Declaration of Independence remains the most perfect instrument of human government ever devised by mankind.  Its foundation (that our rights come from God, not men), its principles (that men only consent to be governed if their God-given rights and freedoms are protected by such government, and not diminished) are as applicable to our urban, post-modern technological society as they were in a rural, agrarian one.

But the Founders were prescient in their understanding of mankind.  Ben Franklin’s warning to the woman who asked what kind of government had been created surmises their awareness of the tendencies of men: “A republic, madam… if you can keep it.”  The Founders knew that government, not foreign powers, would be the biggest threat to the rights and freedoms of citizens.

So the Declaration states, “…whenever any form of government becomes destructive of these Ends, it the Right of the people to alter or abolish it.”  They acknowledged man’s tendency to stick with the status quo, even in the face of assaults on their rights and freedoms: “…all Experience hath shown, that Mankind are more disposed to suffer, while Evils are sufferable, than to right themselves by abolishing the Forms to which they are accustomed.” (Italics mine)

Americans, blessed by this Declaration and the Constitution written to ensure the fulfillment of the Declaration’s principles, and by the protection of two oceans, have experienced opportunities, prosperity, military power and civic peace unparalleled in history.  So content have we become in that peace, prosperity, and power that we have long since abandoned our responsibilities as citizens, ceding that power to professional politicians, as if hired guns would be as diligent and jealous of our rights and freedoms as we, ourselves.

We are now experiencing the inevitable results of giving power to men and women who don’t deserve it, who have never created anything, who have no character or principles except to further their own careers, and whose only “talents” reside in the ability to make speeches by which they attempt to mollify their constituents, while they wax increasingly bold in destroying the very things they were elected to protect.

A case in point: GOP Senate Majority Leader Mitch McConnell, perhaps the slimiest of the swamp creatures, has sided with Democrats Senate Majority Leader Chuck Schumer and lame-duck House Speaker Nancy Pelosi in including the Journalism Competition and Preservation Act (JCPA) in the annual “must pass” National Defense Authorization Act (NDDA), which funds our military and national security actives.  The JCPA has nothing to do with national security, but everything to do with increasing the power of mainstream media and Big Tech cartels like Twitter, Facebook, Google, et al.  But it has languished for a year in committee because the Democrats can’t get it passed on its own merits, so they resort to a favorite ploy to give their lobbyist donors what they want: attach all manner of un-related amendments to bills that are sure to be passed. 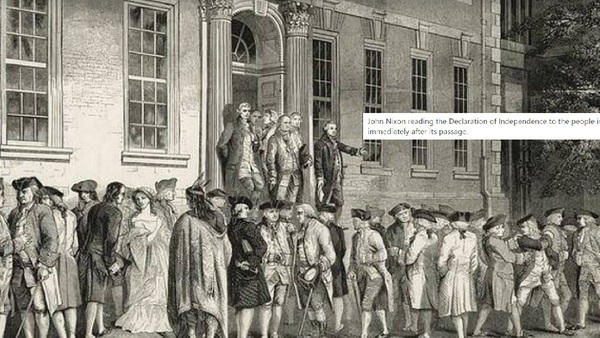 And voila!: the lobbyists and corporate donors get what they paid for, the “representatives” in Congress don’t have to convince anyone of the need, or even good sense, of such a bill, nor do they have to defend their actions to their constituents (“Well, we had to pass the NDAA, and that bill was part of it.”).  Why would anyone question the reasons for the MAGA movement when politicians in both parties routinely resort to such deceit and betrayal?

The last runoff from the midterms hasn’t even happened, yet there is McConnell again selling out the rank-and-file GOP voters, again siding with the Democrats, again giving the leftist media that has groomed him exactly what they want, and the public be damned.  I wish this was the only such betrayal, by McConnell or the other RINOs in the GOP establishment; alas, it is but a speck in an ocean of lies and deceit.

I previously mentioned the prescience of the Founders; it is contained in the following from the Declaration: “But when a long train of Abuses and Usurpations, pursuing invariably the same Object, evinces a Design to reduce them under absolute Despotism, it is their Right, it is their Duty, to throw off such government, and to provide new Guards for their future Security.” (Italics mine)

I learned about the common practice of stealing elections by Democrats as a Political Science major in college, decades ago.  An American Thinker essay by J.R. Dunn, “Democrat Voter Fraud: A Brief History,” is an excellent primer for anyone who have been willfully ignorant of the political machinations of those to whom we blindly give power over our rights and freedoms.  What was attempted in 2016, and accomplished in 2022 and in the recent mid-terms, is not an anomaly, not something new; it is the default, the organized and established policy of the Democrat Party.  Yes, the Republicans would do it, too, given half a chance, but apparently, they really are the Stupid Party.  They, however, do have a part to play in this deceit: their nerve-wracking complacency and cooperation with the Democrats (“bipartisanship”…that only goes one way!).

No wonder they despise Donald Trump so much: he revealed this un-American, un-constitutional and immoral practice, and with it, the RINOs who have long condoned it by their refusal to stand up for their voters, for their limp-wristed, amoral, and unprincipled collusion with the leftists who are destroying the rights and freedoms of American citizens.

I’ve had enough.  The Tea Party was popular due to exactly this disgust with professional politicians in the Republican Party.  It was the millions spent by the GOP (including by Mitch McConnell) in primaries and the general election to defeat Tea Party candidates that caused it to fail.  That’s right, the Democrats had nothing to fear from the Tea Party, which was a threat to the establishment slime like Mitch McConnell and his fellow swamp creatures.

Did you know there is no recall provision for sitting senators and congressmen?  Only their fellow officeholders can eject them from their seats, something that is almost never done.  Why is that?  So the establishment can continue to pacify voters with pretty speeches and promises they never intend to keep and continue to do as they please to enhance their own power and prestige, maybe?  Americans must demand that the House of Representative and the Senate institute a new recall rule for malfeasance, dereliction of duty, betrayal of campaign promises, etc., so that the American people can rid itself, when need be, of these smug, lying, and traitorous “representatives” like Mitch McConnell and his ilk.

I wanted to say “while we still have the power to vote,” but I’m not sure we still even have that power, due to the perfidy and lack of action by GOP state legislatures in ending the mail-in voting and ballot harvesting that threatens to end our republic.