Venality, dishonesty and depravity have rarely been denounced with more passion and clarity.

A Speech for the Ages Aptly Describes the Corruption of the Western Elites – American Thinker<!—->

On April 20,1653, Oliver Cromwell came to the English parliament and gave a brief speech to his country’s assembled leaders. In that speech he condemned their self-seeking, greed, corruption, trickery, thievery, and venality. He looked them in the eyes and told them the truth about how they had cynically sold out the country and the people whose interests and well-being they were tasked with protecting.

It is striking how accurately Cromwell’s words apply to today’s Western elites. Selfish, egoistical and rapacious, all they care about is how to enrich themselves at the expense of common people whom they shamelessly manipulate and fleece in their insatiable quest for ever more wealth and power.

The Covid scam is one of their recent schemes. First, they spread fear and locked up the populations, destroying the livelihoods and prospects of hundreds of millions while they watched their own wealth spectacularly grow. Then, having injected more than sixty percent of the global population with ineffective and dangerous pharmaceuticals, they made off with hundreds of billions of dollars while their victims now suffer from chronic recurrent infection and a range of other serious ailments such as strokes and heart attacks. And we are not even speaking about the hundreds of thousands killed by those improperly tested substances.

And when the Covid scam began falling apart in the face of failing boosters and mounting evidence of harm, they deftly switched the subject and put their grubby hands on Russia. Having pushed NATO to Russia’s doorstep despite the pleadings and warnings from Russia’s leaders, they have needlessly provoked a conflict which they are now intent on drawing out for as long as they can. As of now, the United States government alone has approved more than 40 billion in “aid” to Ukraine, much of which will go directly to the American war industrial complex. The elites are thus cynically using taxpayers’ money to further line up their pockets while treating the Ukrainian people as expendable cannon fodder. But even as they are shamelessly profiteering from the Ukrainian tragedy, they are still urging the noxious Covid injections for children and babies who are at virtually zero risk of severe Covid.

Could anything be more cynical or repulsive?

Potential for evil and corruption is ever present in human nature and when circumstances become favorable it erupts in stunning displays of ruthless voracity. It happened in Cromwell’s time, and we see it happening in our day in breathtaking abundance. The people Cromwell spoke to could well be Biden, Fauci, Trudeau, Walensky, Gates, Zuckerberg, Bourla, Zucker, Austin, Schwab, Schumer, Pelosi and all of their lying and manipulating globalist elitist ilk:

“It is high time for me to put an end to your sitting in this place,

which you have dishonored by your contempt of all virtue, and defiled by your practice of every vice.

You are a factious crew, and enemies to all good government.

You are a pack of mercenary wretches, and would like Esau sell your country for a mess of pottage, and like Judas betray your God for a few pieces of money.

Is there a single virtue now remaining amongst you? Is there one vice you do not possess?

You have no more religion than my horse. Gold is your God. Which of you have not bartered your conscience for bribes? Is there a man amongst you that has the least care for the good of the Commonwealth?

You sordid prostitutes. Have you not defiled this sacred place, and turned the Lord’s temple into a den of thieves, by your immoral principles and wicked practices?

You are grown intolerably odious to the whole nation. You were deputed here by the people to get grievances redressed, are yourselves become the greatest grievance.

Your country therefore calls upon me to cleanse this Augean stable, by putting a final period to your iniquitous proceedings in this House; and which by God’s help, and the strength he has given me, I am now come to do.

I command you therefore, upon the peril of your lives, to depart immediately out of this place.

Go, get you out! Make haste! You venal slaves be gone! So! Take away that shining bauble there, and lock up the doors.

Harsh as these words may sound, they fail to do justice to today’s elites’ depths of corruption. The exhibit number one would be Joe Biden – currently the most powerful elitist in the world – who has sold out his country in a series of outrageous influence peddling schemes involving Ukraine, China and other places around the globe. Biden used his venal son Hunter as a point man who travelled the planet raking in millions for what Rudy Giuliani aptly described as “the Biden crime family.”

You can watch a disrobed, crack-smoking Hunter Biden describing his family’s modus operandi to a prostitute the year before his father became president. He told her that if his father won, he would make “like a gazillion dollars.”

The footage was recorded by Hunter Biden himself on his own laptop, which he later recklessly abandoned in a computer repair shop in Delaware. The fact that this laptop – which contains extensive evidence of hard crimes committed by members of the Biden family – has been in the hands of American law enforcement agencies for more than two years and nothing has been done about it, testifies to the deep corruption and rot in our system. 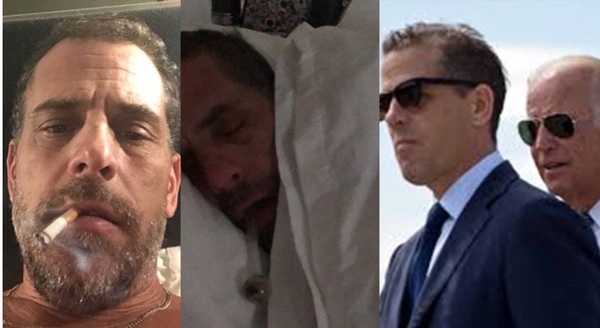 The corrupt Joe Biden, a man who purports to be the leader of the Western world, is a fitting symbol of the depravity of the contemporary Western elites. If you remember, he received their nearly universal support – financial and ‘moral’ – during his presidential run.

What more can be said about these people? Truly one is at a loss for words when watching all this. All we can do is to once again echo the fervid exclamation of the great Oliver Cromwell:

“Go, get you out! Make haste! You venal slaves be gone! So! Take away that shining bauble there, and lock up the doors. In the name of God, go!”

Vasko Kohlmayer was born and grew up in former communist Czechoslovakia. You can follow his writings by subscribing to his Substack ’Notes from the Twilight Zone’. He is the author of The West in Crisis: Civilizations and Their Death Drives.