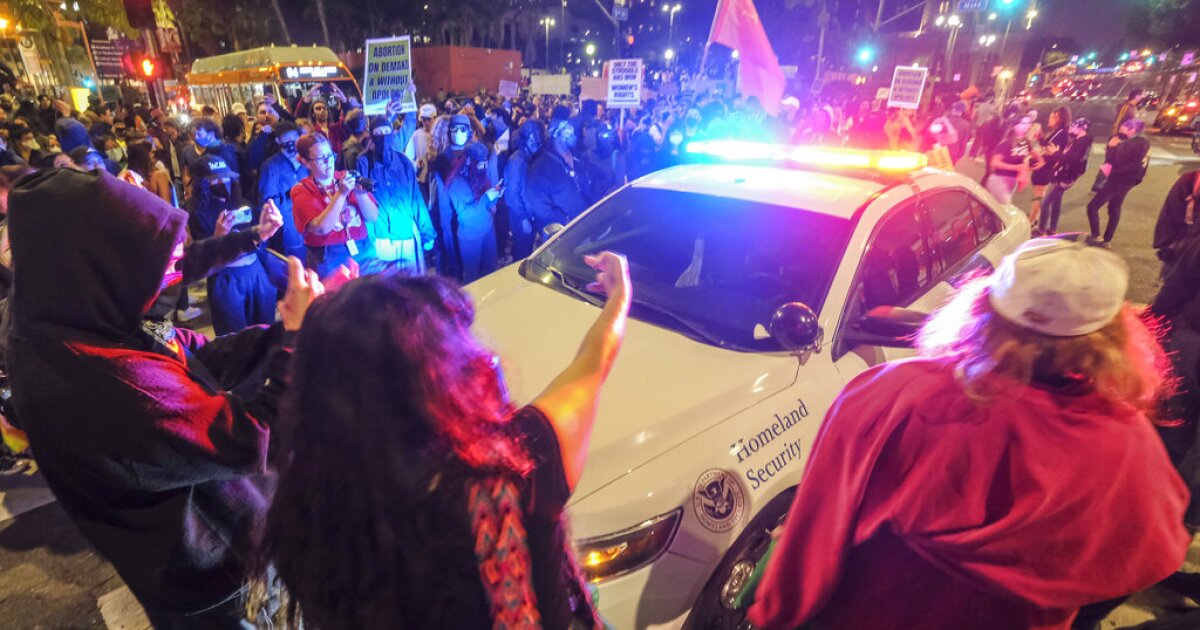 An abortion rights protest in downtown Los Angeles turned violent on Wednesday, leaving one police officer injured and leading to a citywide tactical alert to be declared.

An abortion rights protest in downtown Los Angeles turned violent on Wednesday, leaving one police officer injured and leading to a citywide tactical alert to be declared.

A group of about 250 people marched from the U.S. courthouse to Pershing Square in downtown Los Angeles Tuesday night in a protest organized in response to the leaked Supreme Court draft opinion signaling that the high court would overturn the ruling in the 1973 Roe v. Wade case. Shortly after midnight, eastern time, police say the group began blocking an intersection and some threw rocks and bottles at officers.

“A group of protestors began to take the intersection. Officers attempted to communicate, clear and provide dispersal order to the group. The crowd began to throw rocks & bottles at officers. One officer injured (unknown extent). Citywide tactical alert has been declared,” the Los Angeles Police Department tweeted.

A tactical alert allows the LAPD to redistribute officers to an area where an emergency is taking place in order to have the manpower necessary to control the situation, according to the agency.

The crowd began to disperse about an hour after the citywide alert was issued, according to local news outlet KTLA .

In a video of the protest shared on social media, two police officers attempt to arrest a man by wrestling him on to the floor. A crowd gathers around the scene and one officer is seen using his baton against some of the protesters. In the video, it appears as though the man being arrested gets away. A scooter was thrown at the two officers by one protester.

In another video from Pershing Square, a Department of Homeland Security police vehicle can be seen with its back window smashed, surrounded by protesters, with one individual placing sheets of paper inside the car through the broken window.

LAPD pushing protestors(and me) as they back away. I don’t understand foe the life of me why so few got out of their cars and will follow up. pic.twitter.com/C8IDbULOAv

Law enforcement officers from both DHS and LAPD were seen at the protest, some in riot gear as the situation became chaotic. Protesters attempted to block police vehicles and officers attempted to get through the crowds with their cars.

It is unclear if any arrests were made during the protest. The Washington Examiner has reached out to the LAPD for comment.

Hundreds of protesters gathered in front of the Supreme Court in Washington, D.C., after the document leaked on Monday night.

The mood was initially quiet and somber but turned louder, with people chanting and some jostling with each other, as more people gathered around the high court.