We are losing rights today because we are collectively losing sight of the sacrifices that gave us our rights.

In 1972, after receiving my draft notice, while in college, I enlisted in the Navy. For part of my three-year enlistment, I found myself stationed in Pearl Harbor.  My ship was the USS John Adams (SSBN620), which actually ported out of Guam.

My barracks, on Ford Island, was in the center of Pearl Harbor.  Even though Ford Island served as the naval air station during WW2, the island has a much greater historical significance.  Battleship Row, the berthing location of the USS Arizona, was just off to the northeast side of Ford Island.  Not to diminish any lives or ships lost along this row, the USS Arizona stands out as one of the greatest symbols of all the loss at Pearl Harbor.

As it was many years ago, I don’t fully recall the layout of Ford Island, but I do remember that on several evenings, I would walk a short distance from my barracks to what was left of an old concrete pier and look out to the Arizona Memorial as the sun would set.  Quiet with my thoughts, I would sit with my legs dangling over the edge of the pier and stare out to the white edifice that crossed over the remains of the USS Arizona.  All tours for the memorial were long over by this time of the day.  As darkness fell, I would try to imagine the enormity of the attack.  Even today, when I think of my personal experiences gazing at the memorial, I am humbled and awed by the sacrifice and tragedy of December 7, 1941.  This is where WW2 began for the U.S.  This single event would take my father to Normandy and away from his family for four long years.  My uncle gave his life fighting in WW2.

When thinking of other events that helped to shape America, my lovely wife accompanied me on a road trip, which included several other historic places that had been on my bucket list for years.

Appomattox Court House was our first stop.  Standing in the McLean House where General Lee surrendered the Army of Virginia to General Grant, one can hardly fathom the enormous sacrifice that led to this turning point in our nation’s history.  I know that the Civil War continued for some time after Appomattox, but I viewed the events of the McLean House as the beginning of the end.

The next stop was Gettysburg.  My wife and I watched the movie Gettysburg before we traveled to this most hallowed battlefield.  From the movie alone, you might imagine Gettysburg to be a huge field where the North and South faced off.  If you have ever been to Gettysburg, you know that the condensed movie version is nothing like the real layout of the 6,000-acre battlefield.  My wife and I fell silent when we stood where Pickett both began and ended his charge.  No matter how you view the Civil War, the tragic loss of life was staggering for both sides.  As I stood on the top of Little Round Top, I felt myself marveling at the bravery of Colonel Chamberlain and the 20th Maine Regiment.  As we wandered through the Gettysburg National Cemetery, where President Lincoln gave his famous Gettysburg Address, the headstones told the story of the great sacrifice to keep our nation together.  With tens of thousands of casualties, many consider the great Gettysburg battle the turning point in the Civil War.  I must also mention that I was pleased to see people of all ages touring the battlefield.

For the final leg of our journey, we ended up at the Air and Space Museum at Dulles Airport.  One display halted me in my tracks.  There I was, standing under the nose cone of the Enola Gay.  That bold slanted font I had seen in pictures and newsreels all my life.

Years ago, I personally settled my feelings about this controversial plane.  I will sum it up this way.  I wish we had not lived in a world where an Enola Gay existed, but given all the events in the Pacific, it needed to exist.  I know that many say the end to the war with Japan concluded in Tokyo Harbor aboard the battleship USS Missouri.  However, I believe that the Enola Gay was the beginning of the end to the war in the Pacific.

While looking up at the Enola Gay, my thoughts were interrupted by the giggling and laughter of what appeared to be three high school girls on a field trip walking toward the exhibit.  They passed under the nose cone of the Enola Gay and never looked up.  They had no idea of the history above them.  They really did not know.  The Enola Gay is a huge, shiny B29 Super Fortress.  It can’t be missed.  It is an incredibly famous exhibit.  I asked myself, how can they not stop taking selfies for one moment and just look up?  The answer is — no one told them.

James O’Keefe recently uncovered a Twitter senior engineer saying Twitter’s employees “do not believe in free speech” and that they are as “commie as f—.”  It has to make you wonder: if he really feels this contrary to the Constitution, why does he live in America?

Parents; teachers; and yes, our government are missing the mark.  My wife and I have talked to our children about the sacrifices made in shaping America.  We have talked about event beginnings and endings, and what we know of everything in between.  We felt an obligation to our children, and eventually to our grandchildren, to discuss the main events that made our country the greatest nation on earth.

America has existed to date because people learned and understood the sacrifice of our event-filled history.  I think we are losing rights today because we are collectively losing sight of the sacrifices that gave us our rights.  It is up to us, those who treasure and respect our past, to pass the legacy on.

Please talk to your children and grandchildren.  Don’t let the media tell your children how to think about our history.  Tell them to question and research what they learn.

Who, if not we, will preserve the sacrifices of this great nation?  Let us not be so complacent as to lose and throw away what so many died for.  Don’t let our children pass by our legacies and not even bother to “look up” and understand. 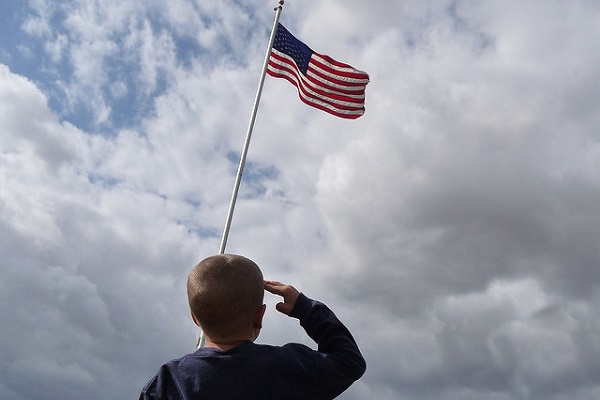