The new elite is relentlessly and systematically, in true Marxist fashion, marching through all the rights that made America unique and successful.

American Individualism Is Being Extinguished By The New Elite – American Thinker<!—->

America has always been an accommodating home for misfits, loners, and others who have drifted outside the mainstream of society. One of the more appealing aspects of the American experience is that you don’t have to belong to get along. You can make your way in the world or find success and happiness without the approval of your fellow man. That type of independence is a rare commodity and has long been a sore spot for the purveyors of “group think.” The overbearing pressure of conformity has been, to a large extent, the way of the world before 1789 and the ultimate freedom manifesto—the Constitution of the United States.

Throughout history, men have been ostracized, banished, exiled, or destroyed simply for not fitting in. For not conforming. As with all things, there were exceptions to the rule but it was a rule nonetheless. America turned that rule on its head when the emphasis changed from the top down to the bottom up for the purpose of governance. Authorities and dictators no longer arbitrarily conferred and revoked privileges. We have rights that are now acknowledged as having been endowed by God. They can’t be taken away by men.

Thus did the individual find his rightful place as the nexus and primary force in society. This was no small accomplishment and it empowered people to strive for success and personal betterment no matter what their station in life, their level of education, or their social skills. This historic change in the role of the individual has driven the prosperity, accomplishment, and the monumental attraction that has always been America.

The resurgence of the authoritarian state was, however, inevitable and the Founding Fathers anticipated its occurrence. Their solution was limited government, which they then built into the constitution. Limit the “necessary evil.” Limit the “group think.” But as sure as night follows day, the failure to curtail government expansion heralded the revival of the authoritarian world. A dark, colorless world of absolute control and dismal existence where people are forced by their peers, their employers, and their governments into docile compliance and acceptance of the most oppressive forms of coercion and intrusion into their lives.

One doesn’t have to look too deeply to see the manifestations of this puppet society. From carbon copy propaganda outlets masquerading as news agencies to outrageous bureaucratic efforts to snuff out the rights and autonomy of the individual.

The aristocracy that we fought long and hard to be rid of is back with an unholy vengeance. The new aristocrats demand a renewed acceptance of their superior station along with a vastly diminished standard of living for the average person. Their war on the middle class and the Bill of Rights is so thoroughly immoral that it’s difficult for most people to believe it’s happening.

Their arsenal includes endless crises, wars, pandemics, social unrest, and fraud. The very air we breathe is their greatest weapon. They frighten people into believing that it will not sustain a livable environment for even ten more years if we can’t learn to live without meat, heat, freedom, and autonomy. They then renew the threat every decade with a slightly different tenor and tone.

Where the left can’t succeed from the inside, they look to their international friends for help in subduing the recalcitrant American citizenry. The UN wants to register and track the sale of ammunition in the United States as a backdoor way of undermining the Second Amendment. Meanwhile, the Biden administration is crashing down the front door as they try to pass legislation that would outlaw most of the guns that Americans now possess. 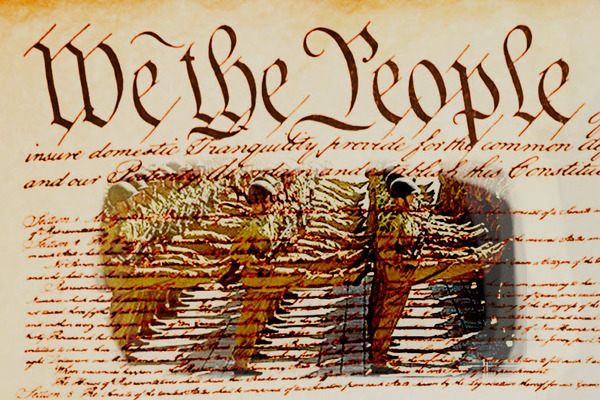 The Second Amendment was more about defending the country from a corrupt and overzealous government than it was about self-defense. Now, however, in an increasingly violent and lawless nation, there are very few ways left for Americans to defend themselves from thugs of all varieties.

When the new aristocracy met in Davos to try and legislate our diets, their plates overflowed with foods the average American can no longer afford. They refrained from such indulgences on “future food Wednesdays,” when they would pretend to choke down the “marriage of alternative proteins [i.e., bugs] with local and seasonal produce” that they would have the rest of us consume every day.

They’ll decide for us what cars we’ll be allowed to drive and whether we’ll be permitted to travel at all. They turn up their noses at our disgusting conveyances and the carbon footprint they stamp on the environment while their private jets are lined up by the hundreds. They do not fear the accusations of hypocrisy because they are above it.

The Biden administration is supporting a move to have the World Health Organization regulate international travel and oversee the implementation of a new vaccine passport. This would effectively cut off the freedom of movement for a large chunk of the American population. The number of people with travel restrictions would grow rapidly as the elites promote mobility as a privilege, not a freedom.

For those still in the dark, “the great reset” is simply the destruction of free enterprise, the middle class, and the Bill of Rights. The left will oversee the ruination of America and sweep the ashes into the dustbin of history. Their plan is well underway. The institutions designed to protect our country are now charged with overseeing and facilitating a massive invasion of our southern border.

The Democrats hold impeachment trials and lawless hearings based on complete fabrications the likes of which Joseph McCarthy would never have dreamt possible. They arrest and imprison their political opposition in purges that would make Mao and Stalin proud. Their courts have become a breeding ground for kangaroos and corruption. All this and more while the American people watch on in stunned disbelief.

Donald Trump did not lose the election in 2020. Many of us knew this immediately. We witnessed the fraud firsthand as insurmountable leads disappeared in minutes. We needed no further proof but it has been forthcoming anyway. With the release of Dinesh D’Souza’s film “2000 Mules,” there can be little doubt left in anyone’s mind that there was an organized effort to steal the election. Only if you don’t want to believe it could you ignore all the evidence.

Elections are the lifeblood of our wounded and faltering system of government. Every other year we hear the stale old reminders about how important a particular election is but this year is different. This 2022 election is, without a doubt, the most important of our lives. It will decide the future of elections and their relevance. The future of liberty. There have been some reforms, in some states, to the voting process but the primary method of fraud—the mail-in ballot—is still in place.

We are told repeatedly that there is a red wave coming and that the Republicans will take back the house. Only if we ignore the media and all the talking heads in Washington can we hope to make this wave a reality and turn it into a tsunami. Complacency and optimism are our enemies. We must not only win fair and square but also overcome all the fraud that is surely going to play a part in this election. We must turn out in numbers that will leave no doubt. Only then will we be able to once again “breathe the free air” and begin the long process of renewal.

Frank Liberato is a pseudonym.