Media activists operate shamelessly and with abundant self-satisfaction because they fail to recognize the role they should play in preserving a representative republic.

The political climate cultivated by 15th-century Florentine humanists stands in stark contrast to that foisted upon us by progressives. Inspired by the newly recovered liberal arts of classical antiquity, the humanists sought to promote civic virtue through the moral education of their governing elites. A liberal education, they believed, was instrumental in establishing a benign, self-perpetuating political community molded by shared aspirations and high moral standards. Given proper education and incentives, all who sought to rise in office would recognize and practice political decency — and would expect nothing less from their peers. To the extent that moral rectitude is embraced at the highest levels (the humanists reasoned) the resulting norms would be self-enforcing, and social betterment would ensue. In his Virtue Politics: Soulcraft and Statecraft in Renaissance Italy James Hankins describes the advance of this project:

“Humanist letters and speeches often praised members of the ruling class for their virtues, even when they had given little evidence of them — following Aristotle’s advice in the Rhetoric that praising men above their merits was a way of motivating them to improve their behavior.”

The Renaissance humanists sought to bring out the best in their peers (and their rulers) by lavishing them with praise. It may be safely said that the contemporary American political scene is not characterized by mutual encouragement and overgenerous praise. Indeed, the ugliness of political rhetoric often defies parody. Anyone with a memory spanning just a decade or so is apt to find contemporary news and social commentary shocking in its immaturity, vulgarity, and spite. Whereas the Renaissance humanists sought to elevate their societies by encouraging the best in their leading citizens, the American Left relentlessly degrades its domestic opposition, portraying them as Nazis, racists, fascists, white supremacists, insurrectionists, and so on.

If praising people above their merits is a way of encouraging self-improvement, lumping people in with the dregs of humanity — telling them no good can possibly come from them; they are unworthy of respect; their rights are undeserved and should be taken away — humiliates them, fosters resentment, and provokes retaliation. The progressives’ constant resort to insult may be understood as a perverse inversion of the humanists’ project: progressive hostility is designed to elicit the worst in the insulted. The Left’s absurd and abusive portrayals of the rest of us aren’t just garden-variety expressions of contempt, they are deliberately crafted provocations and, as such, are designed to injure their targets more profoundly than a mere insult might.

Antagonizing the scapegoats is a political strategy designed to provoke an isolated retaliatory outburst on the part of some unbalanced individual that may then be blown out of all proportion and hyped in the media. The ultimate goal is to use such outbursts to indiscriminately 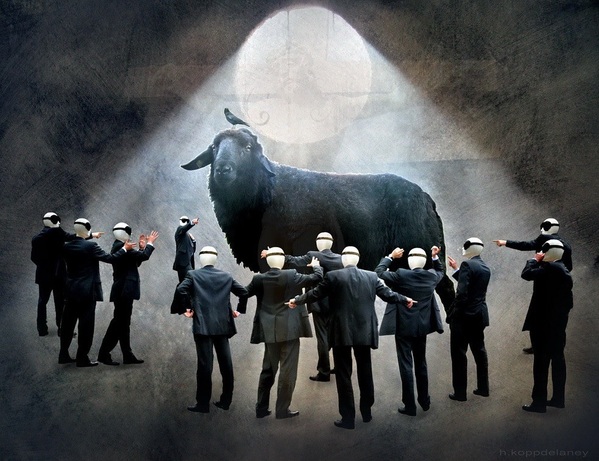 condemn all scapegoats, thereby establishing a warrant for their undisguised (and perhaps even openly celebrated) political repression. The strategy should be recognized: when an enemy invites you to destroy yourself, you should always decline the invitation. Hostile rhetoric, no matter how ugly and absurd, must never be countered with unlawful escalations. The Left has already invented a few Horst Wessels for itself; it should be denied its Hershel Grynspan.

One might object that our analysis is overdrawn and overdramatized, that we are reading too much into the unserious and irresponsible outbursts of a few obnoxious blowhards. Perhaps. But in view of the press’ oft-repeated rush to smear its chosen targets, sinister suspicions suggest themselves. The maudlin interviewer weepily bearing witness to the moving testimony of Jussie Smollett; the glum commentators endlessly recycling the “fine people” hoax; the monotonous chorus solemnly commemorating the all-but-sacred martyrdom of petty thugs like Trayvon Martin and Michael Brown; the casual assignment of guilt by accusation (to police officers, the Covington school kids, Kyle Rittenhouse) — all this arouses our suspicion. Even when these obscene abuses of the public trust are exposed, there is no retraction or apology; the brazen liars simply soldier on. Perhaps no institution is more conspicuous in its utter moral failure than the contemporary American print, broadcast, and online media.

In the past, numerous small, independent, skeptical media operations, all sharing a vague but solid devotion to the tradition of classical liberalism codified in the First Amendment (and all keeping each other in competitive check), we now have a small clique of deeply partisan propaganda factories whose operatives owe their ultimate allegiance to the DNC, or to whatever mercurial billionaire happens to own them, and their mission is to impugn the politically disfavored.

These partisan practitioners benefit from a shoddy and shallow education. Contemporary journalists are, as a general rule, embarrassingly unimpressive, poorly educated, self-promoting hacks having no understanding of (or loyalty to) the American heritage (a phrase from which many would probably recoil as a “racist dog whistle”). Journalists represent the worst the American university system has to offer a society its brainwashed graduates routinely degrade. Any truth a media activist deems detrimental (like the Twitter files) is buried. Any lie deemed serviceable — no matter how dubious the source or implausible the claim — is amplified and promoted. Every cherished falsehood is blared at the public until it’s exposed, then the activist simply trumpets the next serviceable lie (e.g. “Russia Collusion,” “hands up, don’t shoot,” and so on).

Media activists operate shamelessly and with abundant self-satisfaction because they fail to recognize (and hence are incapable of rising to) the role they should play in preserving a representative republic over a longer period of time than is spanned by a given news or election cycle. They are shortsighted, ignorant, and tyrannophilic because they see nothing in the American heritage worthy of being protected or preserved and cannot imagine holding themselves to any standard higher than their own petty, blinkered political biases. Their aim is not to inform the public. It is not to ennoble the culture. It is not to hold the powerful accountable. Their aim is to sell the “narrative,” so they enthusiastically spout propaganda and antagonize the scapegoats and in so doing they act as agents of persecution. Were our age an age in which heretics burn, they would be the first to cast their torches onto the pyre. Their success depends on public ignorance, and for this there is ultimately no better remedy than the thoughtful reading of old books, along with a sympathetic reconsideration of neglected and distorted histories.