When a group is definable, regardless of genetic racial differences, it's still a race—and when it's the subject of hatred, it's racism.

Antisemitism And Jew-Hatred Are Racism As The Left Defines It – American Thinker<!—->

What is race? Are we not one human race? Do we not all have red blood? Brains, bones, veins, and internal organs in the same location in our bodies? Do we not all have the capacity to love, reason, create and make decisions? And when we suffer, do we not all cry from our pain? We, as human beings, have much more in common genetically than we have differences. And yet, there are those who seemingly insist that just a little bit of melanin in our skin negates all this.

The truth, though, is that, in America in 2022, “race” is a social construct, a shared way of thinking rather than a physical reality. It has never had a precise meaning (look it up), and is a pejorative term created by those who wish to divide and conquer; subjugate, separate, and victimize. Even worse, is the animosity and hate the concept of race creates between individuals. Weaponizing the term “You’re a racist” has become an art form used to harass, threaten, frighten, and silence people. It is even used in situations entirely unrelated to real or imaginary racial differences, making it ludicrous and illogical. Most often, it’s used as a ploy when there is no substantial reason to use it.

Which raises the question? Is there such a thing as a “distinct group?” Hispanics are a combination of Black, South American Indigenous, European Hispanic, and white descent. And American Blacks have European, Native American, Hispanic and white blood running through their veins. It seems there is more genetic variation within groups than between them. Thus, with such diversity, race is a more profound matter of self-identification with shared values, languages, historic cultural connections, and religious beliefs.

Where do Jews fit into this?

Hate crimes against Jews are higher than any other minority group and the number escalates yearly. This hatred has taken many forms in many times and places. Haters have forced Jews to convert to Christianity; banned Jews from clubs or businesses; slandered Jews with blood libels; drawn ugly, satanic caricatures of Jews; killed six million Jews, the largest dedicated mass murder of any race ever before or since; vandalized Jewish synagogues and businesses; driven down streets in Jewish neighborhoods screaming “F— the Jews, Rape their daughters, kill the Jews”; desecrated Jewish graves; beaten Orthodox Jews, who have a distinct appearance; thrown elderly Holocaust survivors out the window; and shot and killed Jews in their synagogues while at prayer.

All these attacks were deliberately targeted against Jews and only Jews. Whether defined genetically or as a modern construct, is this not a clear definition of racism? A targeted people?

If these heinous hate crimes were perpetrated against any other group (Blacks, Hispanics, Asians, LGBTQs, etc.), whether defined racially or culturally, these vile acts would be considered racism without hesitation. 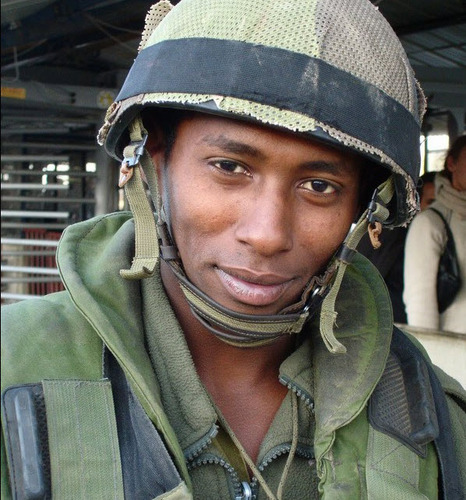 Image: An Ethiopian Jewish soldier by David Bicchetti. CC BY 2.5.

The hatred of Jews is biblical and the oldest form of racism. Significantly, unlike any other so-called “distinct group”, Jews are black (African), brown (Hispanic, East Asian Indian, and from Arab nations), Asian, LGBTQ, and White. In fact, Jews in Israel are about 50% black and 50 % white. And despite this kaleidoscope of colors and values, they are all Jews.

Many Jews insist they’re not a race because race is how Hitler justified murdering 6 million Jews and trying to annihilate Jews worldwide. However, in a world in which “race” is used as a catch-all for any distinct group, and it comes with built-in protections for most groups, it’s logical to classify Jews in the same way for the same protections. After all, the Muslim community and the LGBTQ communities, both of which incorporate multiple genetic races, are “protected classes.”

Americans once understood this. Jews were considered a distinct race entitled to the protections of the Civil Rights Act of 1866. Jews have also been accorded protection under the Civil Rights Act of 1964, which does not define what constitutes a “race.” And on May 17, 2022, the House passed Resolution 1125, Condemning the Rise of Antisemitism. Interestingly the media almost completely ignored it.

The most recent incarnation of the rise in Jewish racism is Anti-Zionism. This is the desire to destroy the world’s only Jewish state. “From the river to the sea,” goes the justifying cry, “destroy the state of Israel, it is an apartheid state.” Is this true? Apartheid means no citizenship, no property ownership, and no right to vote. This is absurd and belies reality and truth in Israel.

The Chairman of Israel’s largest bank is an Arab Israeli; an Arab Muslim is a Supreme Court Judge; and Arab Israelis are university professors, doctors, lawyers, business and property owners, and are citizens with the right to vote. Like America, Israel gives the full rights of citizenship to all, regardless of race, creed, country of origin, sex, etc.

This singular focus of contempt, hatred, discrimination, violence, and destruction against a particular religious group can only be called racism. Jews are a composition of many beautiful skin colors who all believe in one God and are guided by the precepts and principles of the Torah. Regardless of skin color, location or status, Jews have been derided, attacked, and murdered for centuries because of their religious beliefs. How else can you define this level of hate and animosity towards one people other than racism?

Adrienne Skolnik serves on the National Advisory Committee of the Conference of Jewish Affairs.