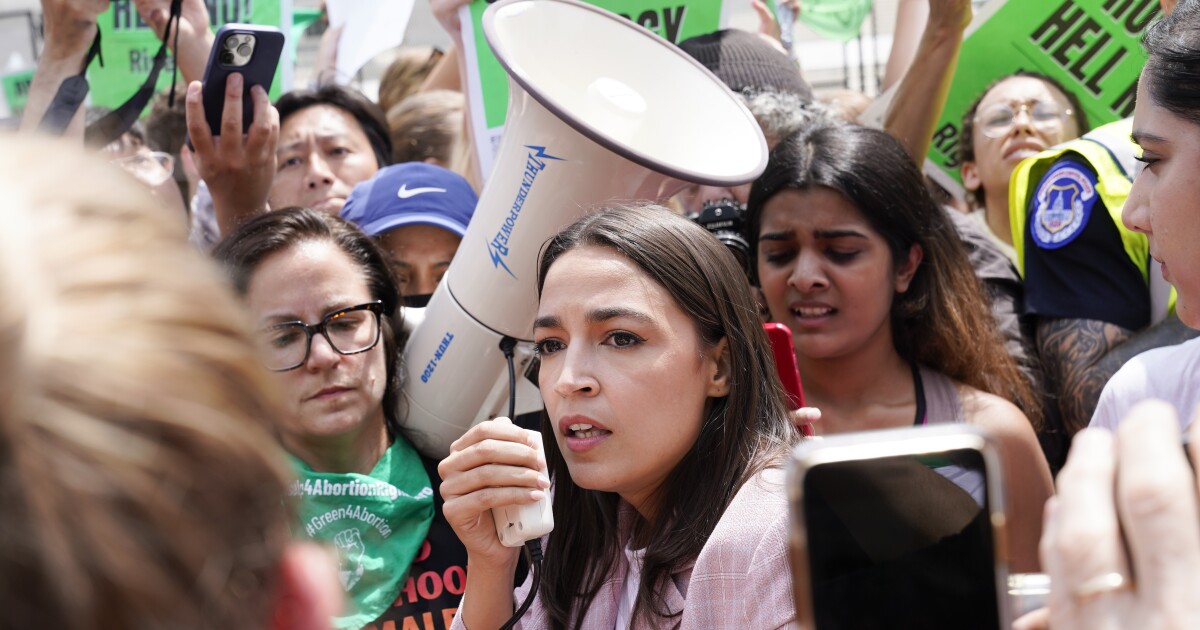 Rep. Alexandria Ocasio-Cortez (D-NY) said overturning Roe v. Wade is a "crisis of our democracy" on Sunday, arguing the Supreme Court has "dramatically overreached its authority."

Rep. Alexandria Ocasio-Cortez (D-NY) said overturning Roe v. Wade is a “crisis of our democracy” on Sunday, arguing the Supreme Court has “dramatically overreached its authority.”

In discussing what the Democratic Party and President Joe Biden can do in response to the Supreme Court’s ruling, including the possibility of opening healthcare clinics on federal lands in red states, Ocasio-Cortez also raised concerns about individual justices themselves during an appearance on NBC’s Meet the Press.

“We had two conservative senators in the United States Senate, Sen. Manchin and Sen. Collins, come out with a very explosive allegation that these — that several Supreme Court justices misled them in their — during their confirmation hearings and in the lead-up to their confirmation,” Ocasio-Cortez said. “This is a crisis of legitimacy. We have a Supreme Court justice whose wife participated in Jan. 6 and who used his seat to vote against providing documents that potentially led to evidence of such to investigators in Congress. This is a crisis of legitimacy, and President Biden must address that.”

Ocasio-Cortez also suggested that impeachment could be possible for any of the Supreme Court justices who lied under oath when they were confirmed and that there should be consequences “for such a deeply destabilizing action and a hostile takeover of our democratic institutions.” She added that a justice not disclosing income from political organizations, “as Clarence Thomas did years ago,” could also be an impeachable offense.

Several liberal lawmakers, including Ocasio-Cortez, appeared at the Supreme Court on Friday after Roe v. Wade was overturned. Protesters renewed calls to codify abortion rights and expand the court.

Biden claimed during a speech on Friday that “Roe is on the ballot” in the 2022 midterm elections, and he promised to protect the ability to travel to seek an abortion, calling it “a bedrock right.” The president said he would do “everything in [his] power to fight” such restrictions.