What would it take for a Twitterata woman journalist at the Washington Post or a retired federal bureaucrat or a veteran activist at an NGO to think, wow, this is screwed, I'm going to vote Republican at the next election?

Are Our Rulers Losing the Mandate of Heaven? – American Thinker<!—->

We racist-sexist-homophobe Americans are pleased to see that Hispanics are trending strongly away from Democrats in the current Bidenflation. And even blacks seem less than enthusiastic about Joe Biden.

But whatabout the real core Democrat supporters: the credentialed, the educated women, the LGBTs, the folks parading in front of the homes of Supreme Court justices? Are they starting to wonder about double-digit inflation a year into the Biden administration?

The only on-the-ground information I have is from a federal government retiree who’s going to borrow her daughter’s fossil-fueled car when she travels from D.C. to Philly in July. For some reason she feels safer leaving her electric car at home.

And there’s the gay acquaintance who doesn’t eat meat and doesn’t drive much. He doesn’t notice anything wrong on the economic front.

I guess that most liberal wokies are so cozily protected by their gubmint jobs, their inflation-protected pensions, and their taxpayer-subsidized urban lifestyles that they are completely insulated from harm. What do they care about truck drivers paying double for diesel fuel, or young people despairing about ever being able to afford a home? The bus is free if you don’t feel like paying.

And, of course, our lefty friends are blinded by their One True Religion that teaches them that the only thing that matters is to save the planet from fossil fuels and society from systemic racism — at any price. You think saving the planet would be cheap, racist?

What would it take for a Twitterata woman journalist at the Washington Post or a retired federal bureaucrat or a veteran activist at an NGO to think, wow, this is screwed, I’m going to vote Republican at the next election?

That was the question in my mind at 3 o’clock in the morning, staring at the ceiling. Because I didn’t want to think that Hell would freeze over before the educated, credentialed elite got to their Houston We Have A Problem moment.

But, realistically, that’s what it would take for the elite to vote Republican: Hell freezing over. But why?

We talk, these days, about the decline of religion. Well, maybe Christianity is in decline from 200 years of anti-Christian ruling-class bigotry. But there is no religious decline among our rulers; they have a fundamentalist religious faith in the power of history, of equality, of justice, of credentials, and the devastating tweet. It is their religious faith that blinds them to the Wokey Trail of Tears: the decline of the working class, the chaos of black inner cities, the misery of post-feminist women, the fatherless mass killers, the wrecked lives of the trans mania. Oh, and rampant inflation. 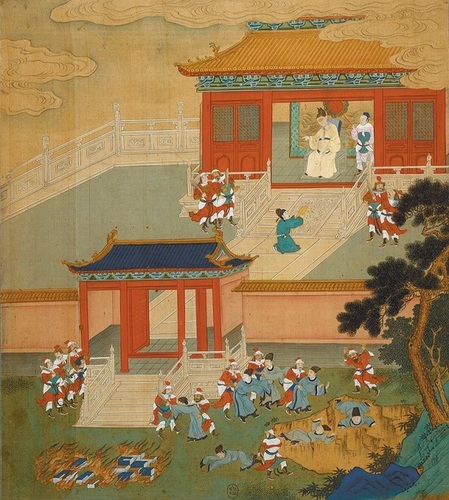 So, inside their ideological bubble our rulers are unbowed. They know that the universal laws of history prove that only educated, credentialed experts can end poverty and injustice.

So what hope is there for us?

When you, proud emperor or ruling class, wake up one day and find you lost the Mandate of Heaven overnight, it is well to understand that you never had it. You only thought you did, as in the glorious days of JFK’s Camelot and LBJ’s Great Society, when it seemed that you were going to rule for ever and ever.

It is the conceit of every ruling class that it is firmly in control. It isn’t. It just takes a bad harvest, or a flood on the Yellow River, or ten percent inflation and suddenly the Earth moves.

To you, our own all-American mandarin class, educated servitors of the current Son of Heaven, Emperor Joe, I give my Four Laws.

Look, all I am saying is that everything you rulers believe is a lie. And sooner or later, your lies catch up with you, usually when inflation is at 10 percent and there is no end in sight.

What? Am I saying that the religion of our rulers is a false religion? No, I would never do that. But you ruler chaps might want to check out the Mandate of Heaven on Wiki. I am reading all about it in Henry Kissinger’s magisterial On China.