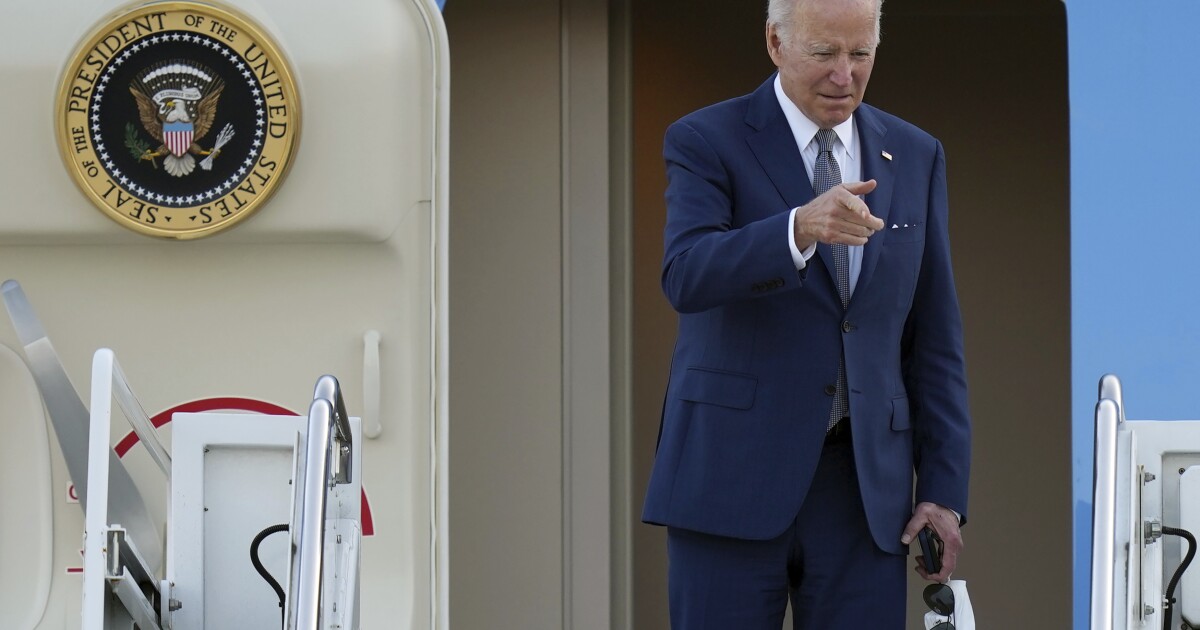 President Joe Biden's trip to Asia not only afforded him opportunities to coordinate with regional leaders on China and North Korea but also allowed the president to push inflation blame onto some U.S. allies.

President Joe Biden’s trip to Asia not only afforded him opportunities to coordinate with regional leaders on China and North Korea but also allowed the president to push inflation blame onto some U.S. allies.

Prior to the war in Ukraine, the Biden White House claimed that rising prices were driven by “transitory” factors related to the coronavirus, such as outsized demand from the cooped-up American public and pandemic work stoppages at Asian manufacturing centers.

Following Russia’s launch of the protracted war in Ukraine, Biden immediately pivoted to blaming inflationary factors, specifically global oil prices and widespread food shortages, on the Kremlin. However, core inflation, which factors out energy and food costs, has continued to rise in the United States since February.

Meanwhile, inflation remains the most important issue to midterm election voters from both parties, and polling, not to mention public statements from prominent Democrats, show the public isn’t swallowing the administration’s Putin focus.

Monday’s launch of the new Indo-Pacific Economic Framework with Japan, South Korea, and nearly a dozen other countries in the region allowed Biden to refocus inflation woes on pandemic-sparked supply chain problems in Asia rather than disruptions caused by the war in Ukraine.

“Our GDP is going to grow faster than China’s for the first time in 40 years. Now, does that mean we don’t have problems? We do,” said Biden, flanked by leaders from India, South Korea, Japan, and Australia during the launch ceremony. “We have problems that the rest of the world has, but less consequential than the rest of the world has because of our internal growth and strength.”

“This is going to be a haul. This is going to take some time,” he continued. “In the meantime, it seems to me the best thing I can do — in addition to try to get the Middle Eastern countries, including OPEC, to raise their production of oil and move along that route — is to see to it that we continue to grow our economy, create jobs.”

Biden additionally used the event as a platform to push for his own domestic policies, claiming they would help combat the “second wave” inflation impact pressuring voters.

“If you’re able to have childcare at 17% of — 7% of your income, if you’re able to be in a position where we were able to provide for a tax cut for middle-class people and working-class people, etc. — all those things would be very helpful,” the president added. “When we have a 50-50 Senate, it means we have 50 presidents, and I’m having a little trouble getting some of these things passed, but we’re not going to give up. We’re going to keep pushing.”

Finally, Biden suggested he and Treasury Secretary Janet Yellen are “considering” rolling back the Trump administration’s China tariffs, which some have suggested could ease prices for U.S. consumers.

The IPEF itself was spun out of the Quadrilateral Security Dialogue. Member nations Australia, India, Japan, and the U.S. added Indonesia, South Korea, Malaysia, New Zealand, the Philippines, Singapore, Thailand, and Vietnam to the new framework.

The 12 signatories pledged in a statement to foster innovation across the clean energy, digital, and technology sectors “while fortifying our economies against a range of threats, from fragile supply chains to corruption to tax havens.”

White House officials added that the IPEF will “help lower costs by making our supply chains more resilient in the long term, protecting us against costly disruptions that lead to higher prices for consumers.”

However, Taiwan, which produces the world’s largest supply of semiconductors, is not an IPEF signatory.

U.S. Trade Ambassador Katherine Tai recently met with her Taiwanese counterpart, and national security adviser Jake Sullivan told reporters Sunday that the U.S. is “looking to deepen our economic partnership with Taiwan, including on high-technology issues, including on semiconductors and supply chains.”

Officials suggest that including Taiwan in the pact could disrupt the work the administration is doing to repair the U.S. relationship with China.

“It’s not a surprise to me that China has concerns about the number of countries, the diversity of countries who have expressed interest in and enthusiasm for IPEF,” Sullivan added. “We do expect, in addition to the countries that join for the launch tomorrow, others will come along in the months and years ahead.”