Was the career of Martin Luther King more of a misfortune than a benefit for American blacks?

On a few occasions I have ventured to make public observations about the sorry state of today’s lower class African Americans.  It’s a large lower class — much larger as a percentage of all blacks than lower class whites are a percentage of all whites.  It makes up roughly one-third of all American blacks.  Another third is made up of people who are doing well: they have good educations, good jobs, good incomes, good housing.  A middle third is made up of people who teeter on the brink: many of them will rise to the well-off class, many will fall into the lower class, and many will just continue to teeter.

Whenever I’ve said something along these lines, I have been accused, not surprisingly, of racism, even though I said nothing more than that lower class blacks suffer from a dysfunctional and self-destructive subculture.  I don’t see how anybody in his right mind can deny this.  It is a perfectly obvious truth, almost as obvious as the truth that water is wet.  All the same, it’s something you’re not supposed to say.  Conventional good manners (otherwise known as political correctness) ban assertions of this kind.

The reason these assertions are banned is that they are heretical; they contradict one of the articles in the orthodox creed of present-day “progressivism” — the article according to which all misfortunes of blacks are due to white racism, a racism that is almost universal in that section of American society occupied by non-progressive or non-liberal whites.  If a black thug from a crime-ridden ghetto happens to murder your grandmother, you may not answer, when asked what happened to your grandmother, “A ghetto thug murdered her.”  You’re expected to recognize that he was driven to this crime by four hundred years of white racism, an evil that continues to flourish today.  And since you yourself, being white, are probably a racist, it may be said that you compelled this unfortunate young man to kill your grandmother.

I should note in passing that your grandmother, if she’s white, will almost certainly not be murdered by a thug from the ghetto.  Such thugs murder ghetto-dwelling grandmothers only.  Almost all violent black crime is black-on-black crime.

Fully realizing that to say an “incorrect” thing about African Americans is a horrible sin from a liberal-progressive point of view (almost as bad a sin as saying there is something weird about same-sex marriage, another sin I’m prone to commit), I shall now proceed to compound my offense by suggesting that the career of Martin Luther King was more of a misfortune than a benefit for American blacks. 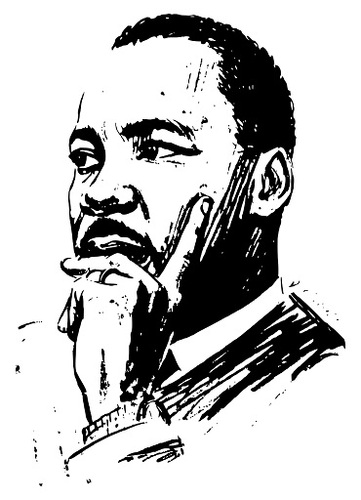 Before I explain, let me put this on record, that I view King as a truly great man.  As a leader, he was the only non-president to be in the same league with our greatest presidential leaders, such men as Washington, Lincoln, and FDR.  King changed America for the better in two ways: one, by leading blacks to demand their rights; second, and even more important, by convincing whites that they had to rid both their hearts and their institutions of anti-black racism.  He freed blacks from suffering racial injustice, and he freed whites from what is even worse, doing racial injustice.  (I think it was Plato or Socrates who first said that doing injustice is worse than suffering it, an idea Christianity agrees with.)

The misfortune came when subsequent black leaders — Jesse Jackson, Al Sharpton, Black Lives Matter, and a hundred minor demagogues — felt that they must establish their leadership credentials by imitating King.  How does one do that?  Well, King fought against white racism, didn’t he?  So the epigones too will have to fight against white racism.  But suppose King did such an effective job of fighting white racism that he largely destroyed it?  Suppose he persuaded whites of the wrongness of racism?  Supposed he convinced them to give up racism and not to pass it on to their children and grandchildren?  What then?

Remember that saying attributed to Voltaire — “If God did not exist, we’d have to invent him”?  Well, the MLK epigones have said, “If white racism no longer exists, or if it has become a relatively minor phenomenon, we’ll have to re-invent it.  For there is no other way to do an imitation of MLK, and doing that imitation is our raison d’être, not to mention that it’s our bread and butter.”

And so these demagogues — “civil rights leaders” as the mass media call them — have taught American blacks, especially those of the lower classes, that their many misfortunes are the result, not of any inadequacy among themselves or in their way of life, but of the continuing unfairness of a society in which “white privilege” reigns.  Instead of teaching individual and family and group self-reliance, these demagogues have taught the opposite.

There once was a great black leader who did teach lessons of self-reliance, Booker T. Washington.  From the 1890s until the modern civil rights era, Booker T. was almost universally regarded as the greatest American black.  In the 1960s he was removed from that pedestal and replaced by MLK, since instead of being an anti-racism crusader BTW had accommodated to the Southern regime of race segregation.  BTW was a realist, and he understood that if blacks in America were ever to rise to the level of equality with whites, this would not happen through the benevolence of whites.  Blacks, while taking advantage of whatever help whites like Andrew Carnegie and John D. Rockefeller and Theodore Roosevelt might offer, would have to achieve this equality through self-reliance and self-improvement.  And so, they improved themselves according to the BTW script, until by the 1950s they were able to follow the leadership of MLK.

Of the two, King was probably the greater man.  Nonetheless black Americans, especially those from the lower classes, would be far better off if black leaders today would give up imitating MLK and instead imitate BTW.