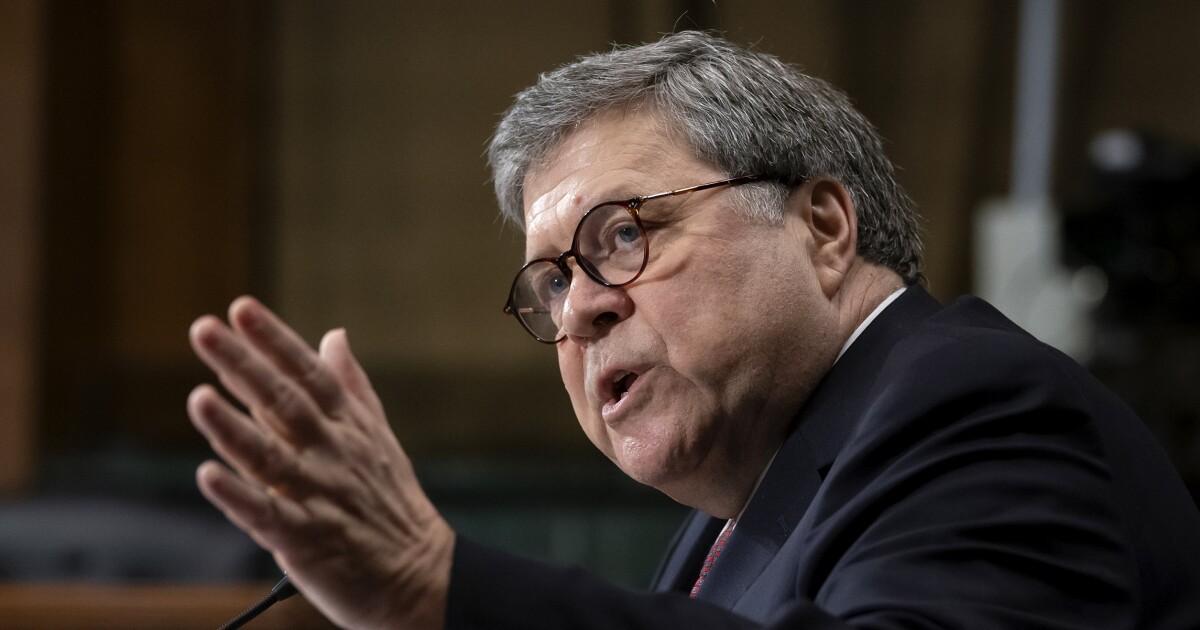 More significant than securing a conviction, Barr reasoned Wednesday, is how Durham has pulled back the curtain regarding the extent to which Hillary Clinton’s 2016 presidential campaign and its allies spread theories tying rival Donald Trump to Russia in the final months of the election, as well as the conduct of the FBI.

“I’m very proud of John Durham. And I do take responsibility for his appointment,” Barr told Fox News host Jesse Watters. “I think he and his team did an exceptionally able job both digging out very important facts and presenting a compelling case to the jury.”

Sussmann was charged with lying to the FBI about whom he was representing when, in September 2016, he presented internet data that suggested a now-discredited link between Trump and Russia’s Alfa-Bank. In particular, Sussmann was indicted on charges of concealing his clients — Clinton’s 2016 presidential campaign and “Tech Executive-1,” known to be former Neustar executive Rodney Joffe — from FBI general counsel James Baker. Sussmann denied lying to the FBI and pleaded not guilty.

The jury in Washington, D.C., sided with Sussmann on Tuesday. “Despite being falsely accused, I believe that justice ultimately prevailed in my case,” Sussmann said in a brief statement after the verdict.

Barr, who appointed Durham to investigate the origins and conduct of the Russia inquiry, said the special counsel “accomplished something far more important” than a conviction by bringing out the “truth” across two areas.

“First, I think he crystallized the central role played by the Hillary campaign and launching as a dirty trick the whole Russiagate collusion narrative and fanning the flames of it,” he said. “And, second, I think he exposed really dreadful behavior by the supervisors in the FBI, the senior ranks of the FBI, who knowingly used this information to start an investigation of Trump and then duped their own agents by lying to them and refusing to tell them what the real source of that information was. And that was appalling.”

Barr has long signaled skepticism about whether the Trump-Russia investigation was opened on sound legal footing. It began in late July 2016 after Trump campaign foreign policy adviser George Papadopoulos bragged to an Australian diplomat that he heard the Russians had damaging information on Clinton. The FBI’s counterintelligence investigation, dubbed “Crossfire Hurricane,” was later wrapped into special counsel Robert Mueller’s investigation into Russian election interference. Mueller’s team was unable to establish criminal conspiracy between the Trump campaign and the Kremlin.

Justice Department Inspector General Michael Horowitz determined there was sufficient cause for the FBI’s counterintelligence investigation into the Trump campaign. But both Barr and Durham publicly disagreed with that conclusion in late 2019.

This Alfa-Bank matter tied to the Clinton team may not have spurred the FBI’s investigation into Trump’s links to Russia, but Barr recently said he accepted the chance to become attorney general, his second stint, because he believed a “constitutional crisis” was afoot.

“I think whatever you think of Trump, the fact is that the whole Russiagate thing was a grave injustice. It appears to be a dirty political trick that was used first to hobble him and then potentially to drive him from office,” Barr told BlazeTV host Glenn Beck on an episode of his podcast. Barr also said he believes “it is seditious” but stressed that criminality would have to be determined in court.

One revelation during the trial came from Robby Mook, the campaign manager for Clinton in 2016, who said the candidate personally signed off on sharing since-debunked Trump-Russia allegations related to Alfa-Bank with the media during the election. During the trial, Mook admitted he was not confident in the veracity of the Alfa-Bank claims when the decision was made to share them with the press but claimed the media would help vet the information. “We wanted the American people to know about it, yeah,” he said when asked if the campaign was pleased the allegations were published.

Another disclosure, as the Washington Examiner’s Byron York wrote Tuesday, relates to the FBI’s openness to the information. “We learned that a senior FBI agent involved in the Trump-Russia investigation, Joe Pientka, sent a note to another agent about the Alfa-Bank tip: ‘People on the 7th floor to include Director are fired up about this server. Reachout and put tools on … it’s not an option — we must do it.’ The FBI building’s seventh floor is where top management, including then-Director James Comey, had offices,” York said.

Although Durham left his role as U.S. attorney after the Trump administration ended, the Biden administration let the inquiry continue after Barr appointed him special counsel. The endeavor has been criticized by Democrats and some legal observers, who claim the inquiry is meant to undercut Mueller’s investigation into ties between the Trump 2016 campaign and Russia.

Some Trump allies, including former Rep. Devin Nunes, speculate Durham may be working up to a conspiracy indictment.

Pressed by Watters on the frustration of people who “feel like they were cheated out of accountability” by Durham not getting a conviction, Barr stressed that criminal liability isn’t the only factor at play in the special counsel inquiry.

“People have done, I think, a very good job trying to develop this case in the face of very strong headwinds,” Barr said. “And part of this operation is to try to get the real story out. And I have said from the beginning, you know, if we can get convictions, if they are achievable, then John Durham will achieve them. But the other aspect of this is to get the story out. And I think the Danchenko prosecution is going to further amplify these themes and the role that the FBI leadership played in this, which is increasingly looking fishy and explicable.”

Durham has one other active prosecution: a case against Igor Danchenko, a key source for British ex-spy Christopher Steele’s anti-Trump dossier, who has pleaded not guilty to five counts of making false statements to the FBI about the information he provided to the former MI6 agent for his discredited dossier. That trial is slated to start in October in Virginia.

Danchenko, a United States-based and Soviet Union-born researcher, allegedly relied on a network of Russian contacts and undermined key Trump-Russia collusion claims when interviewed by the FBI. He was previously investigated as a possible threat to national security due to potential Russian intelligence contacts, per documents declassified by Barr and released in September 2020. According to Durham’s false statements charges, Danchenko anonymously sourced a claim about Trump 2016 campaign manager Paul Manafort to longtime Clinton ally Chuck Dolan, who spent many years, including 2016, doing work for Russian businesses and the Russian government.

Research for the now-discredited dossier was funded by the Democratic National Committee and Clinton’s 2016 campaign. The two were fined by the Federal Election Commission for not properly disclosing those expenditures. Durham has obtained a single guilty plea, which came from former FBI lawyer Kevin Clinesmith, who admitted to altering an email about a Trump campaign aide under government surveillance.

In fact, it has been revealed that the FBI used the dossier to obtain authority to continue this secret surveillance of Carter Page, who was never charged with a crime. Horowitz, the DOJ watchdog, determined that the FBI’s counterintelligence investigation was filled with serious missteps and errors and concealed potentially exculpatory information from the Foreign Intelligence Surveillance Court. The Justice Department told the FISA court that it believed at least the final two of four FISA warrants were “not valid.”

“The FBI was aware that the primary source of it — they had suspected of being a Russian intelligence agent,” Barr said. “So the prospect that this was Russian disinformation fed through Hillary’s campaign is very real and was never looked into by Mueller even though he had all the relevant facts.”