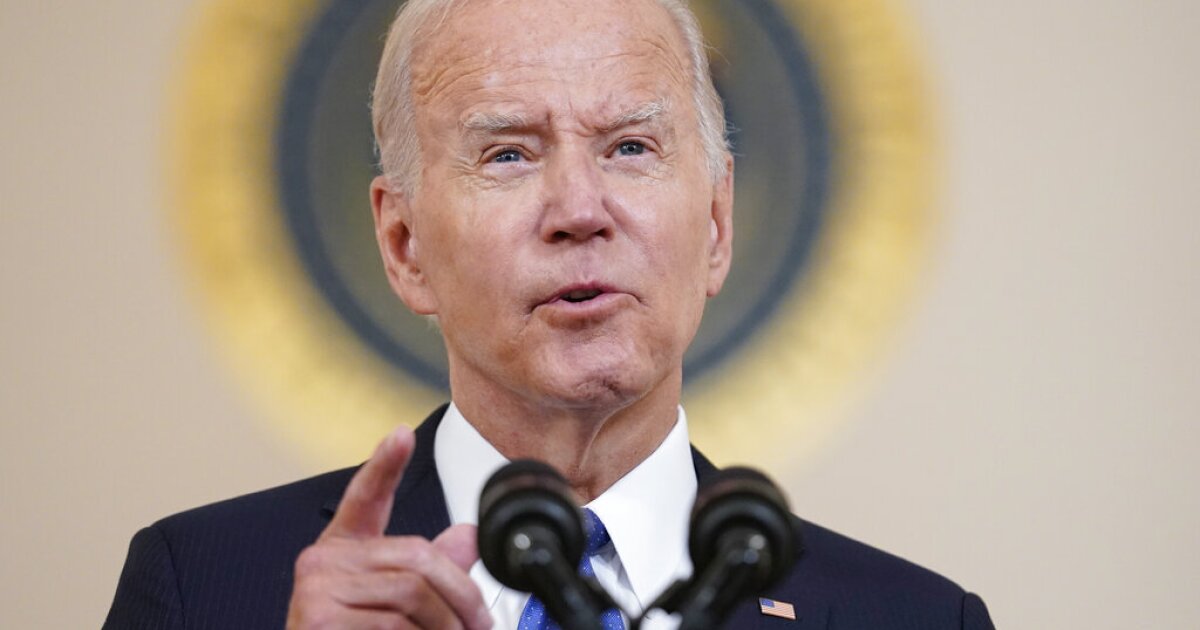 An appeal by President Joe Biden to put the Supreme Court’s decision overturning Roe v. Wade on the November ballot will test the president’s ability to deflect the public’s attention from the economy and inflation toward a highly fraught issue Democrats believe could galvanize support in their direction.

An appeal by President Joe Biden to put the Supreme Court’s decision overturning Roe v. Wade on the November ballot will test the president’s ability to deflect the public’s attention from the economy and inflation toward a highly fraught issue Democrats believe could galvanize support in their direction.

In remarks from the White House’s Cross Hall, Biden, flanked by presidential portraits dating back over a hundred years, said overturning the 1973 decision was a life or death issue for women. He also argued that overturning Roe would have implications for other constitutional rights many take for granted.

Biden was in the Oval Office when the ruling to end nationwide abortion access came down. There, he was briefed by his chief of staff, according to a senior White House official. After reviewing the decision, the president updated the draft of a speech he delivered shortly after noon.

Biden, framing the decision as an extreme assault on personal freedoms, said Congress would need to enshrine Roe in federal law to retain its protections. First, however, Democrats would need to shift the balance of power in the evenly divided Senate.

“Voters need to make their voices heard,” Biden said. “We need to restore the protections of Roe as law of the land. We need to elect officials who will do that.”

The appeal is “directly aimed at independents and suburban women,” said Donna Shalala, a former Florida congresswoman and secretary of health and human services during the Clinton administration.

But the message goes beyond women, Shalala said, by animating concerns over extreme cases, such as states ending medically induced abortion or abortion in the case of incest or rape. She said that the potential to reverse rulings on contraception, which would weigh on families, is another factor likely to draw outcry from a broader swathe of voters.

“As a campaign issue, we’re not going to campaign on 15 weeks or 20 weeks or whatever,” Shalala added.

Separately, Democrats argue that the high rate of abortions for black and other minority women makes protecting the right a matter of social justice.

During a Friday call with Democratic coalition members, a senior White House official said they intended to cast their response along racial and economic lines.

“Simply put, abortion access is about racial justice, and it is about economic justice. And that’s something that we’re going to make sure that we amplify ourselves,” Emmy Ruiz, Biden’s director of political strategy and outreach, said on the call with advocates.

Railing against the decision “to upend the scales of justice” on Friday, Biden pointed to his Republican predecessor. “It was three justices named by one president: Donald Trump,” Biden said, delivering a clear message about the power of elections to drive change.

“It’s a realization of an extreme ideology and a tragic error by the Supreme Court,” he said.

Biden repeatedly emphasized the ruling and its possible outcomes as a far-reaching consequence of conservative political and legal efforts.

A majority of justices joined the opinion authored by Justice Samuel Alito in the case Dobbs v. Jackson Women’s Health Organization, ruling that a law banning abortion after 15 weeks of gestation in the state of Mississippi should hold.

The justices voted 6-3 to uphold the Mississippi law, relegating jurisdiction to the states to decide when a woman can terminate a pregnancy, and five justices voted to overturn Roe, the decision that legalized a nationwide constitutional right to abortion.

Biden’s appeal to put Roe on the ballot in the November elections could prove complicated.

At the state level, Dobbs could prove to be “a significant advantage” for Democrats running in governor’s races, said Dick Morris, a former Democrat and top adviser to former President Bill Clinton.

Morris said Republicans should embrace the Mississippi law with its 15-week limit. “Voters have come to see that as a compromise position between those who want to allow abortion up to the moment of birth and those who would like to have abortion from the moment of conception,” he said.

However, at the national level, Morris said Dobbs was unlikely to sway voters, who have watched Democrats’ efforts to pass federal legislation collapse in Congress.

While Biden is limited in his executive response, he pledged to protect women seeking to cross state lines to find abortion providers and access to contraception and medication abortion drugs.

Kristen Day, an anti-abortion Democrat who leads Democrats for Life of America, said Biden should instead use the opportunity to change how the country approaches pregnancy.

“We have an opportunity as a country now to change how we treat people,” Day said. “Instead of shipping women out of state for abortion, what can you do for the women there?”

She also criticized abortion rights advocates and Democrats’ framing of the issue as protecting the rights of minority women.

“You want to keep abortion legal because you think it helps black women, but have you asked black women?” Day said. “They don’t want abortion.”

After a draft opinion overturning Roe leaked in May, the White House promised an “all-of-government” response to the end of nationwide abortion access. Questioning the president’s commitment, activists responded at the time by saying he hadn’t “done much of anything.”

That sentiment has not shifted and places Biden squarely in the crosshairs of liberal activists whom he hopes to rally to the polls in November.

And there are other Democrats who feel Biden’s response falls far short.

Day said Biden is squandering a chance to bring anti-abortion Democrats back into the party and is reneging on his Inauguration Day promise to upend partisanship.

He could have followed in the footsteps of former Democratic Presidents Barack Obama or Clinton while in office, she said, taking a stance that favors the right to abortion but calling for fewer cases and for support for women who carry their pregnancy to term.

“He was supposed to unite the country, and it’s more divided than ever,” she said.