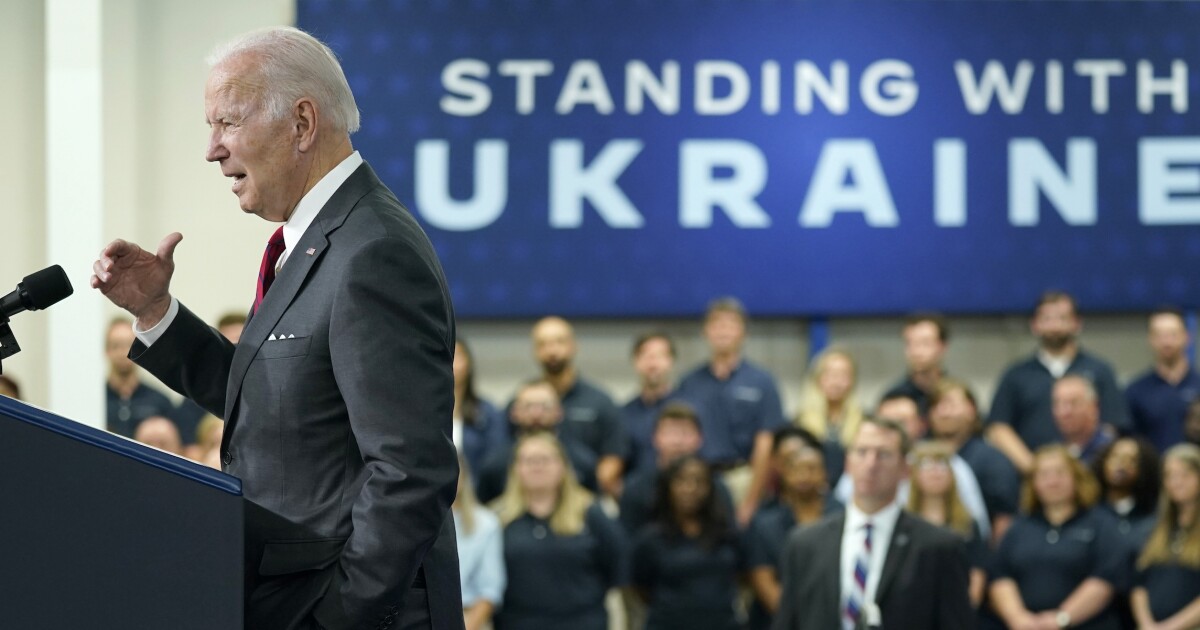 President Joe Biden touted the military equipment the United States is providing to Ukraine as he toured a Lockheed Martin facility in Alabama.

President Joe Biden touted the military equipment the United States is providing to Ukraine as he toured a Lockheed Martin facility in Alabama.

The U.S. has transferred more than 5,000 Javelin missiles, a lightweight, portable shoulder-fired anti-tank weapon, since Russia invaded Ukraine on Feb. 24. Lockheed Martin and Raytheon Technologies manufacture the Javelin missiles together.

“As I said from the beginning, this fight is not going to be cheap, but caving to aggression would even be more costly,” the president said. “We either back the Ukrainian people to defend their country, or we stand by as Russia continues its atrocities and aggression.”

Javelins can hit targets up to 2 1/2 miles away, and a White House press office told reporters ahead of Tuesday’s trip that the weapons have “been used very effectively by the Ukrainians to defend their country against the Russian invasion, including to win the battle for Kyiv. The Ukrainian military has made extensive use of Javelins to damage Russian tanks and artillery throughout the conflict.”

The U.S. has provided a third of its Javelin stockpile and a quarter of its anti-aircraft Stinger missile stockpile, Sen. Roy Blunt (R-MO) said during a Tuesday hearing on Capitol Hill where Defense Secretary Lloyd Austin and Gen. Mark Milley, chairman of the Joint Chiefs, were testifying. The secretary said they were still above their minimum requirements despite the hits.

The CEO of Raytheon, the defense contractor that produces Stinger missiles, revealed last week that it will have difficulties replenishing its stockpiles of the weapon.

Biden has initiated eight presidential drawdowns since the war began, committing nearly $4 billion in military aid to Ukraine, and he recently urged Congress to pass a new $33 billion spending bill, which includes more than $20 billion for weapons, ammunition, and other military assistance.

The weapons delivered in the U.S. aid deal shifted a couple of weeks ago as Russia’s military decided to concentrate its offensive in the Donbas region instead of throughout the country. The terrain in eastern Ukraine, which has a heavy pro-Russian separatist faction, makes Javelins a useful tool.

“More than 170 Ukrainian military soldiers have been trained at more than one location on the M777 [howitzers], and there’s another 50-plus that are scheduled to graduate today, so when they do graduate today — in fact, they may have already graduated today — that puts us up over 200 Ukrainian artillerymen trained on the M777,” a senior U.S. official told reporters Monday.

The official added that another 20 soldiers began training on the Phoenix Ghosts, while roughly a fifth of them have already arrived in Ukraine.