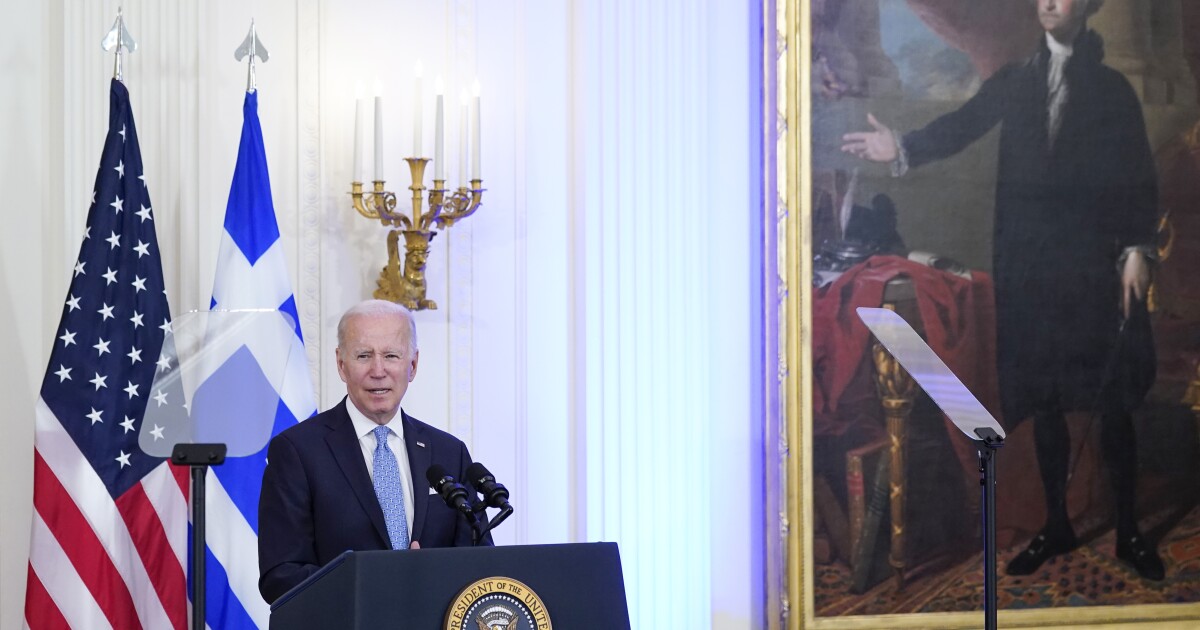 President Joe Biden will use the deadly mass shooting in Buffalo, New York, over the weekend to yet again call on Congress to pass gun control legislation, but some Democrats doubt that will happen.

President Joe Biden will use the deadly mass shooting in Buffalo, New York, over the weekend to yet again call on Congress to pass gun control legislation, but some Democrats doubt that will happen.

Biden immediately condemned the murder of 10 black people in a Saturday statement that noticeably did not include a call for Congress to send him a bill expanding “common sense gun control measures,” which some Democratic congressional aides told the Washington Examiner illustrates the futility of pushing for a legislative solution in the current Congress.

The president instead emphasized domestic terrorism and the shooter’s apparent racist motive.

Vice President Kamala Harris said in a similar statement that also did not call for new legislation that Saturday’s shooting illustrates “an epidemic of hate across our country that has been evidenced by acts of violence and intolerance.”

“We must call it out and condemn it,” she continued. “Racially-motivated hate crimes or acts of violent extremism are harms against all of us, and we must do everything we can to ensure that our communities are safe from such acts.”

Since entering office, Biden has vowed to sign any gun control measures into law that come across his desk but has consistently opposed changing Senate rules to expedite that process. Furthermore, given the opposition to the president’s gun proposals from Biden heel Sen. Joe Manchin (D-WV), the White House would need to work with Republicans to pass any bill, and three liberal Hill staffers signaled to the Washington Examiner on Monday they are “less than optimistic” that could happen with the midterm elections on the horizon.

One staffer expressed frustration and asked “how many more mass murders” must occur before “heartless” Republicans stop “putting politics ahead of people.”

“Voters supported President Biden because we believed he would keep his campaign promises,” a second staffer added. “He’s obviously being blocked by ultra-MAGA lawmakers, but he could be doing so much more on gun reform, voting rights, green energy, and even forgiving student loan debt.”

Biden and first lady Jill Biden are set to visit Buffalo on Tuesday. White House officials would not say whether the president plans a shift in strategy to address gun violence and domestic terrorism through new executive action but confirmed that Biden will “call on Congress to take action to keep weapons of war off our streets and keep guns out of the hands of criminals and people who have a serious mental illness,” during his Tuesday remarks.

One official specifically noted that Biden will refer to the shooting as “terrorism motivated by a hateful and perverse ideology that tears at the soul of our nation” and ask the public “to give hate no safe harbor and to reject the lies of racial animus that radicalize, divide us, and led to the act of racist violence we saw on Saturday that took the lives of 10 of our countrymen.”

White House press secretary Karine Jean-Pierre additionally fielded a number of questions during Monday’s briefing about Biden’s plan in the wake of yet another deadly shooting.

While Jean-Pierre referred back to the president’s past calls for legislation, she would not say if Biden would press Congress to pass a bill. The shooter had an extensive history of mental health problems but legally purchased a firearm.

“He really wanted to go to Buffalo. He made sure that he went there before he went to Asia. He wants to go there and comfort the people who went through this violence on Saturday and wanted to offer, you know, offer some comfort and listen to them, talk to them, see how they’re doing, and so that is going to be his priority with the first lady,” Jean-Pierre said in one such exchange. “I don’t want to get ahead of what he’s going to say. I will let the president speak for himself when we get there tomorrow.”

“I think the president, as he’s done for this past year, is going to continue to call for gun reform. That is not going to change. That is something that he has done this past year every time we have heard of this gun violence,” she continued. “Our country is facing an epidemic [of] gun violence that is costing lives every day. We saw that in Buffalo, as we’re talking about, and in examples every day that might not make the news but tear up families and communities. This is a top priority for the president.”

A number of Democratic lawmakers have expressed anger at Biden’s inaction on the matter in recent months.

“It’s time for more urgency from the administration as the gun violence epidemic gets worse by the day,” Sen. Chris Murphy (D-CT) said in an April interview. “A lot of us know that the president’s heart is in the right place, and we’ve been really patient with his team.”