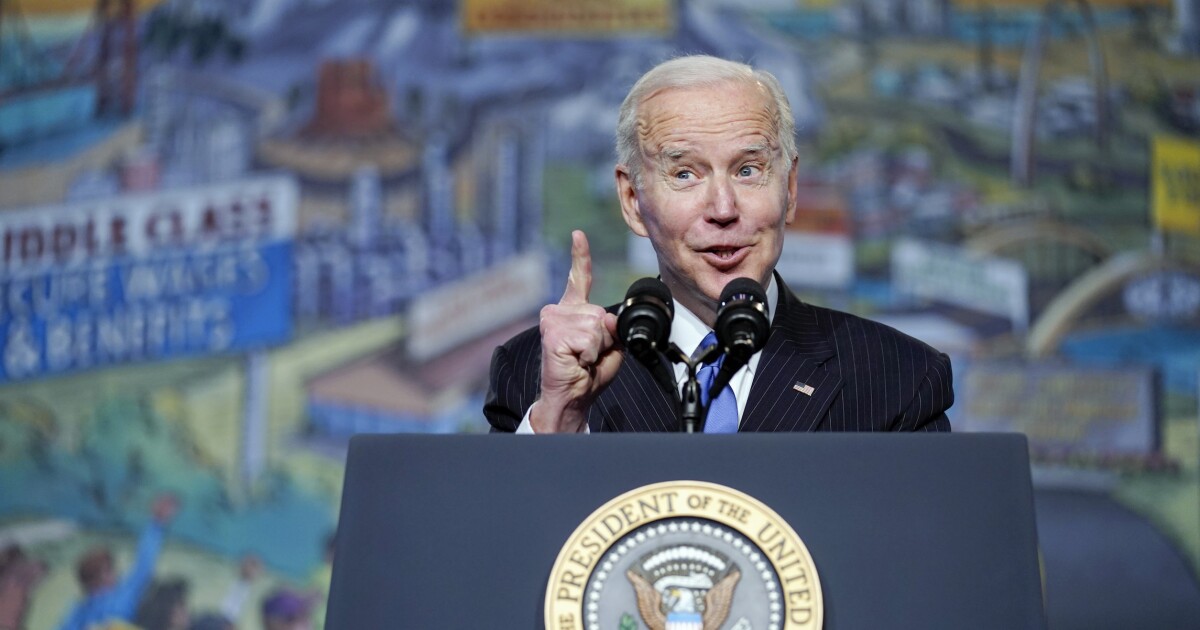 President Joe Biden claimed that his administration had secured a historic deficit reduction of nearly $1.5 trillion, calling it “the biggest decline in a single year ever in American history.”

President Joe Biden claimed that his administration had secured a historic deficit reduction of nearly $1.5 trillion, calling it “the biggest decline in a single year ever in American history.”

But critics say the claim is misleading since it reflects changes from a historically high deficit of $2.8 trillion owing in part to policies Biden actively promoted in 2021.

“The deficit is falling by $1.5 trillion, that’s not the same as saying the president is cutting the deficit by $1.5 trillion,” said Marc Goldwein, senior policy director with the Committee for a Responsible Federal Budget. “One reason it will fall so much between 2021 and ‘22 is because the president signed legislation that increased it so much in 2021.”

“That’s not the only reason [for last year’s deficit], but it’s a big reason,” said Goldwein. “It’s kind of bizarre to take credit for deficit reduction when it’s driven by the expiration of your deficit increases.”

This year’s deficit will likely be the fourth-largest in American history, easily outpacing the $900 billion figure from 2019, though deficit hawks give Biden credit for even talking about the importance of fiscal responsibility in the federal government.

Economists also give credit to the American Rescue Plan for boosting manufacturing and gross domestic product. Unemployment has reached a healthy 3.6%, and job growth is increasing at a steady clip.

But there are warning signs on the horizon for the economy, with the Federal Reserve hiking interest rates to combat inflation and earnings growth failing to keep up. GDP shrank by 1.4% during the first quarter of 2022.

Jared Bernstein, a member of Biden’s Council of Economic Advisers, said earlier this week he isn’t discounting a recession in the near future but that the United States is uniquely equipped to handle such an economic downturn.

“I can tell the American people that we are in a much better position when it comes to that recession question than pretty much any other advanced economy I’ve seen,” Bernstein said in an interview on CNN Thursday morning. “You can never rule anything out, so that’s not really a relevant question.”

Two straight quarters of negative GDP is generally considered to mark a recession.

Biden has said the falling deficit should also ease inflationary pressures. The trick will be to stick the landing as COVID-19 relief expires and inflation hikes cool off the economy. Goldwein said he’s pretty worried about a recession but feels a bumpy but ultimately successful landing is most likely.

The president’s defenders say Biden bashers are trying to have it both ways on the economy.

“He didn’t deserve that much blame for inflation, which was mostly due to COVID and supply chain issues,” said Center for American Progress senior adviser David Madland. “So if he gets the blame there, he certainly gets the credit for reducing the deficit now. I think it’s fair he gets some credit.”

The American Rescue Plan boosted the economy, which is contributing to today’s falling deficits thanks to higher employment and more taxes being paid, Madland argues.

Madland feels confident the economy is prepared to come down from the stimulus dollars and reach a more favorable inflation level on its own. His fear is the Fed will become too aggressive with interest rate hikes that could halt that progress.

“The economy is on relatively good footing and will be primed to continue going forward, so long as the Fed doesn’t kill the recovery,” he said. “It’s a delicate balancing act between getting inflation under control and not having the Fed kill the goose that lays the golden eggs.”