What we're witnessing is a backdoor route to implement the Green New Deal policy that Congress could not pass.

In a press conference last week following his meeting with Prime Minister Fumio Kishida in Japan, President Biden praised the escalating price of gasoline as a positive step toward realizing the Democratic Party’s dream of enacting the Green New Deal.

“[When] it comes to the gas prices, we’re going through an incredible transition that is taking place that, God willing, when it is over, we will be stronger and less reliant on fossil fuels when this is over,” Biden said. Biden followed these comments by giving lip service to the millions of Americans forced to spend an increasing percentage of their disposable income on putting gasoline in their vehicles.

According to a study recently by economist Dr. Edward Yarendi, American families are now paying what amounts to $5,000 per year to put gasoline in their automobiles, a painful increase from just $2,800 a year ago.

In late May, the average gallon of gasoline in the U.S. hit a record high of $4.59, about 51 percent more than a year ago. By contrast, the price of a gallon of regular unleaded gasoline on January 20, 2021, the day President Biden took the oath of office, was $2.38/gallon.

Californians are now paying $6.00 for a gallon of gas, a level the rest of the United States may soon experience. “With expectations of strong driving demand in the summer months, the U.S. retail price could surge another 37 percent by August, to a national average of $6.20/gallon,” predicts Natasha Kaneva, the head of commodities research at JP Morgan.

On May 27, 2022, the U.S. Energy Information Agency (EIA) reported that the price of Brent crude oil (the world standard) had risen to $119.81/barrel. By comparison, the cost of Brent crude oil averaged $41.96/barrel in 2020, the last year of the Trump administration.

At the end of May, more than a million households in New York City metropolitan area were 60 days in arrears on their medical bills, with an average of $1,427.71 in debt and shut-offs increasing. Middle-class Americans are experiencing the brunt of the current inflation spike. “For the middle class, a larger share of their budget goes toward gasoline,” explained Peter Mueser, a chancellor’s professor at the University of Missouri who studies labor economics.

“It’s time for Americans to get back to work and fill our great downtowns,” President Biden said in his 2021 State of the Union speech. But with the cost of gasoline rapidly edging toward $6.00/gallon, many Americans are questioning whether driving to work is worth the increased marginal impact rising gasoline costs have on their relatively fixed disposable income. 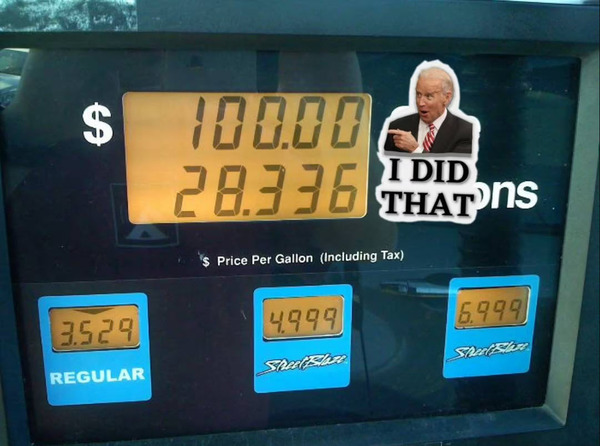 Biden’s statement in Japan refused to acknowledge that his administration bears a significant causal link to increased energy prices in the United States and worldwide. The Biden administration has made a series of decisions reversing Trump administration energy policies by shutting down the Keystone pipeline and canceling offshore oil and gas leases in the Gulf of Mexico and Alaska.

The Biden administration is developing into a sad repeat of the Carter administration’s economic policies, as evidenced by a redux of the 1979 stagflation that brought the type of double-digit inflation and stagnant economic growth we are again seeing today. Ethanol was the rage during Carter’s 1973 OPEC oil embargo crisis. With President Carter entirely onboard with the peak oil crowd, his administration championed ethanol as the way America would achieve energy independence. In sharp contrast, under President Trump’s strong support for hydrocarbon fuels, the United States defied all peak oil predictions, becoming a net exporter of oil and a world leader in oil and natural gas production.

On August 20, 2019, the Energy Information Administration (EIA), the statistical agency of the U.S. Department of Energy, announced that the United States established new production records, with U.S. petroleum and natural gas production increasing in 2018 by 16 percent and 12 percent, respectively. The EIA further announced that the United States surpassed Russia in 2011 to become the world’s largest natural gas producer and surpassed Saudi Arabia in 2018 to become the world’s largest petroleum producer. The EIA report noted that the 2018 increase in the United States, which boomed under the Trump administration, constituted “one of the largest absolute petroleum and natural gas production increases from a single country in history.”

In his recently published 2022 book Fossil Future: Why Global Human Flourishing Requires More Oil, Coal, and Natural Gas – Not Less, energy expert Alan Epstein points out that the “secret sauce” behind the exceptional cost-effectiveness of fossil fuels is “generations of economic innovation and achievement specifically applied to the remarkable attributes of fossil fuels: natural storage, natural concentration, and natural abundance.” 1/

Suppose we had a battery the size of a flashlight battery that could store enough solar energy to light a city. If solar technology that powerful existed, the entire world would drop hydrocarbon fuels instantly to switch to these new, powerful solar batteries.

Suppose we had a wind energy storage device equally as powerful. Suppose ten wind turbines placed a few miles outside a metropolitan area could provide all the electricity that the city and suburbs needed for a week, whether or not the wind blew. Again, a mighty wind energy capacity would dislodge hydrocarbon fuels from their current position as the world’s preferred energy choice.

The physics of solar and wind power, however, limit their usefulness. The sun does not shine in the sky at night, and the equinox, two times each year, marks the point where a day lasts for twelve hours and night occurs for twelve hours in both the Northern and the Southern Hemispheres. As with every other component of Earth’s weather and climate systems, the wind is also variable.

The cost of providing sufficient backup or storage to run a stable electric grid from wind or solar power could multiply the cost of generating electricity by a factor of five or more, given the problem of intermittency. Intermittency is an inherent problem of wind and solar power. The generation of wind and solar power energy fluctuates wildly between day and night because of seasonal variations and weather events. While wind and solar technologies are advancing, the ability to create a mighty wind or solar battery the size of a flashlight battery is nowhere on the horizon. Today, solar and wind power lack the scalability to provide reliably operating, utility-scale electricity generation able to supply energy 24/7 for large metropolitan areas globally.

While the Biden administration is determined to impose the Green New Deal on Americans through a series of executive decisions and regulatory actions aimed at constraining the supply of hydrocarbon fuels, the inescapable conclusion is that double-digit inflation that includes prohibitively escalating energy costs is political suicide. Jimmy Carter’s failure to end stagflation ushered in the era of Paul Volker and dramatically increased interest rates, setting the stage for the presidency of Ronald Reagan.

“Woke” Democrats controlling the White House and the House of Representatives are repeating Carter’s mistake. Biden in the White House and Pelosi in the House risk retaining political power in their blind determination to pursue a radically green ideology founded more on their anti-capitalist sentiments than on the complex empirical realities of energy physics and economics.

Since 2004, Jerome R. Corsi has published 25 books on economics, history, and politics, including two #1 New York Times bestsellers. In 1972, he received his Ph.D. from the Department of Government at Harvard University. He currently resides in New Jersey with his family. His next book, entitled The Truth About Energy, Global Warming, and Climate Change: Exposing Climate Lies in an Age of Disinformation, will be published on June 28, 2022.