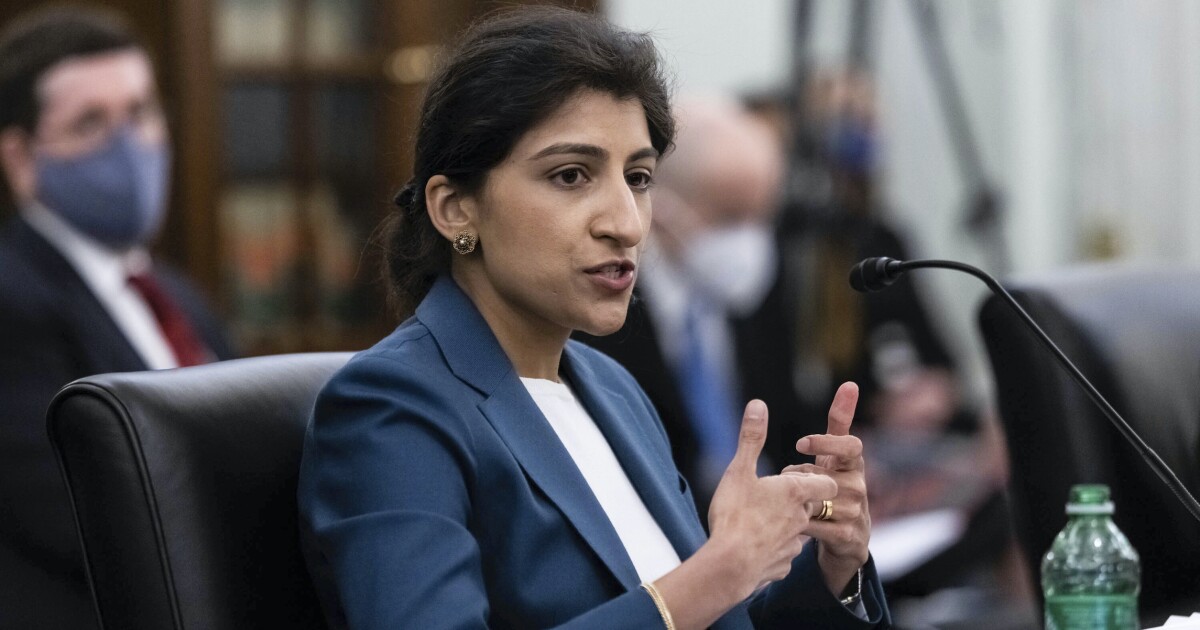 Democrats have regained a majority at the Federal Trade Commission, enabling Chairwoman Lina Khan to advance an aggressive and liberal anti-monopoly and consumer protection agenda focusing on Big Tech and major oil companies.

Democrats have regained a majority at the Federal Trade Commission, enabling Chairwoman Lina Khan to advance an aggressive and liberal anti-monopoly and consumer protection agenda focusing on Big Tech and major oil companies.

The confirmation to the commission Wednesday of Biden nominee Alvaro Bedoya, a Georgetown University law professor and prominent privacy advocate, will give Democrats a 3-2 advantage during votes related to the regulation of Big Tech companies and on questions related to corporate monopolistic conduct, mergers, and fraudulent activities.

The FTC is one of the key federal agencies in charge of regulating Big Tech companies and other large industries when it comes to issues related to antitrust, data privacy, and security.

Khan and the Democrats at the commission are likely to use their new majority to investigate and file new lawsuits against Big Tech companies like Amazon. They’re also likely to investigate claims of oil price gouging, as sought by Democrats, and, more generally, scrutinize major recent mergers and find ways to strengthen consumer and child data privacy.

Liberals are eager for Democrats at the commission to move quickly after being stymied by the two Republican commissioners for the past eight months.

“It’s been frustrating for us that the Republican commissioners have obstructed progress on issues that are bipartisan, like Big Tech abusing its power,” said Sarah Miller, the executive director of the American Economic Liberties Project, a liberal think tank focused on antitrust issues.

“We expect there to be a big push for enforcement action on the tech companies — on rolling back mergers from dominant platforms, beefing up data privacy standards, looking into drug prices, and investigating if oil price gouging is occurring amid high inflation,” she said.

Republican antitrust lawyers are skeptical that sky-high oil prices have been caused by unfair price gouging.

“As to fuel price investigations, I am afraid that is a recurring fool’s errand every time fuel prices have gone up,” said Makan Delrahim, former President Donald Trump’s assistant attorney general for the Department of Justice’s antitrust division.

Democrats accuse the oil industry of ripping people off through price gouging, while Republicans have blamed President Joe Biden’s policies for high inflation and restrictions on oil drilling.

“Politicians ask the FTC to investigate, and the answer has repeatedly been issues of supply and demand. The commission can simply respond with the time-tested demand curve we all learn in Economics 101,” Delrahim said.

Neil Chilson, acting chief technologist at the FTC for a year under the Trump administration, said he feared partisanship would drive Democrats’ agenda at the agency.

“Inflation is the No. 1 concern of Americans, but an oil price gouging investigation is a political play and nothing will come of it,” he said.

“At most, strong language … to discourage price collusion can be put out, but no economists will back taking any action, and the FTC has no authority to bring a case forward in this space unless there’s a clear violation of antitrust law,” said Chilson, who is now a senior research fellow on tech issues at the Charles Koch Institute, a libertarian research organization.

Chilson added that he expects Khan to make aggressive “economywide investigations and rule makings that courts will be very skeptical of” because Khan wants to “shift the goalpost of what’s possible at FTC through new competition rule makings.”

The FTC is expected to focus on stopping major recent mergers, such as the Microsoft-Activision deal and the Amazon-MGM merger, as well as changing the merger guideline policies.

“The Democrats’ main objective these days is to rewrite merger guidelines,” said Matt Stoller, an antitrust expert and author of Goliath: The Hundred Year War Between Monopoly Power and Democracy.

The push to rewrite the merger guidelines will likely result in greater government scrutiny of merger deals between businesses, particularly in the tech industry, which has been a target of increased focus in the past few years after a string of notable acquisitions by Facebook, Amazon, Apple, and Microsoft.

It’s seen as unlikely, though, that the FTC would try to stop Musk from taking over Twitter given that the billionaire CEO doesn’t have any major conflicts of interest that could violate antitrust law.

“I don’t think the FTC will block the purchase of Twitter. I don’t see a path to that,” Stoller said.