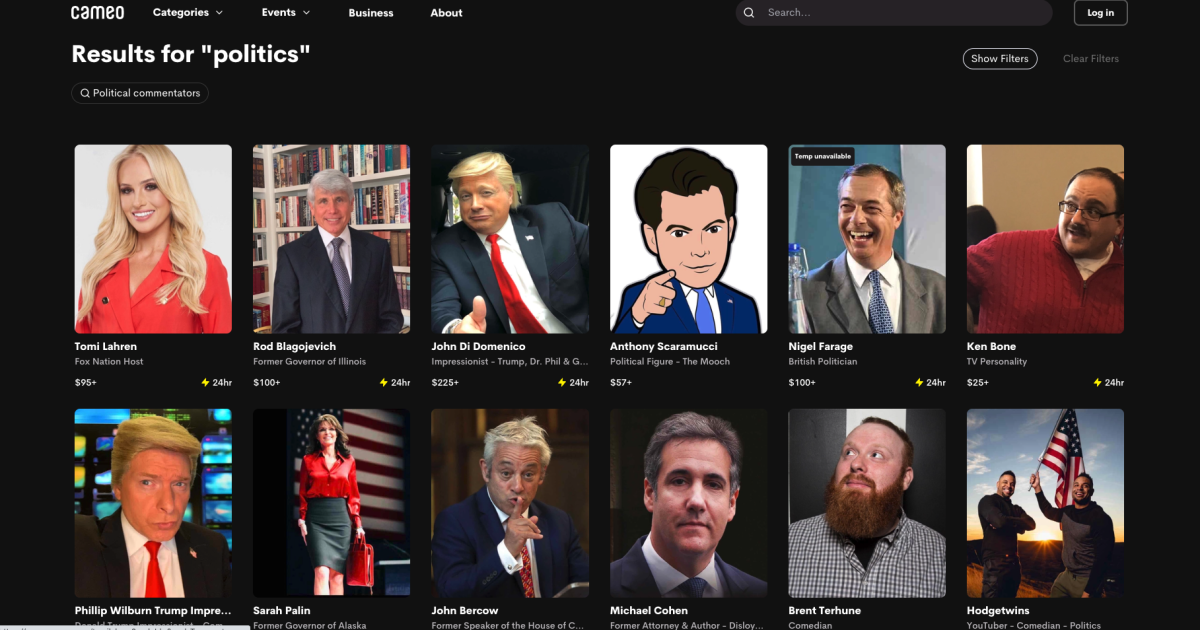 Politicos have lined up to use the digital platform Cameo, a website that allows users to request personalized messages from celebrities and online personalities — for a price.

Politicos have lined up to use the digital platform Cameo, a website that allows users to request personalized messages from celebrities and online personalities — for a price.

While most people may seek out a birthday message from NBA stars and comedians, there is also a market for those seeking more politically inclined individuals.

Former Trump lawyer Rudy Giuliani is one such political player offering personalized messages in exchange for a fee. “I’m Rudy Giuliani. If you want to have a really nice conversation, a birthday greeting, or just talk golf, go to the link below,” Giuliani said in an advertisement Monday while swinging his golf club back and forth.

Giuliani has been on the platform since mid-2021 and has had at least 46 people write positive reviews. He offers personalized messages for $325 or “Engaging video content for your company, customers, or employees” for $2,275.

A glance through the website’s list of political commentators shows the presence of other people well known in the political world.

Donald Trump Jr., former Alaska Gov. Sarah Palin (now a candidate for House), former U.K. politician Nigel Farage, and Trump ally Roger Stone also have profiles. The prices vary from $25 to $5,000 depending on the video’s intent and the personality in question.

The messaging is customizable, but many personalities appear to lean into their political messaging. For example, Trump Jr. says in his sample video, “I hear you’re just a good, patriotic, hard-working American and a small business owner that’s in support of the movement, MAGA, my father, my family, God, guns, and country. It doesn’t get much better than that, man.”

The app announced in September 2020 that it was allowing some celebrities on the forum to earmark some of their payments to go toward President Joe Biden’s campaign.

Others have used it for pranks or to get nods from people who perhaps didn’t realize what they were doing. A Montana Democrat paid former New Jersey Gov. Chris Christie $200 on Cameo in October 2020 to endorse him.

The fact that a former Trump White House Communications Director will say anything you ask him to for $100. pic.twitter.com/QDCWUyS8gw

The number of cameos each person has released remains unclear since the company does not release data beyond a list of reviews. However, business has slowed for the company following a surge in popularity during the height of the pandemic. Its CEO announced Wednesday that it was laying off 25% of its staff out of a need to “right-size” the business.

A representative for Cameo did not respond to requests for comment from the Washington Examiner.