The one-time Fox News journalist exposes how the left wraps hardcore censorship in the loving mantle of public safety.

If there be time to expose through discussion, the falsehoods and fallacies, to avert the evil by the processes of education, the remedy to be applied is more speech, not enforced silence [censorship].

Many in the “mainstream” media are thrilled that former Fox News journalist Carl Cameron, who resigned from Fox in 2017, reportedly because he had trouble finding his way to work, has praised Biden for his initiative to create a government “disinformation board“ and called for the “police” to “monitor” stations like Fox News and put people like Tucker Carlson in jail for lying. According to Cameron, Carlson has been “screaming fire in a crowded theatre for years” and “if you disturb the peace by starting a riot in a movie theatre, cops are going to arrest you and you might end up in jail or you might end up in something worse.” Cameron did not specify what his threat of “something worse” might be. He doesn’t need to because that’s not the left’s real concern.

The immediate occasion for Cameron’s calls to jail journalists who do not support his politics is that, as he sees it, Carlson has gone beyond the pale by claiming that the Democrat immigration policies are designed to “replace the white population in the US…by non-white people.” Even though Joe Biden has bragged that “[we want] an unrelenting stream of immigration. … [so that] folks like me [of] Caucasian European descent, for the first time in 2017 [will] be in an absolute minority in the United States of America,” Cameron has decided, given his self-appointed post of truth-detector, that journalists should be put in jail for reporting what many politicians, academics, and media people have actually said.

Of course, Cameron has not called for everyone who makes such statements to be put in jail. For example, he has not called for President Biden to be jailed for saying that immigration is being used to change the United States from a “white” into a “non-white” country. Nor has he called for Stacy Abrams, Anderson Cooper, Don Lemon, Chuck Schumer, Ron Brownstein, Jennifer Rubin, Julien Castro, Medi Hasan, John Berman, Roland Martin, or James Acosta, to name just a few, for acknowledging this fact. Rather, as is usual in such cases, the Left will have police jail people on the other side of the political aisle, not their own comrades, for stating politically incorrect facts. 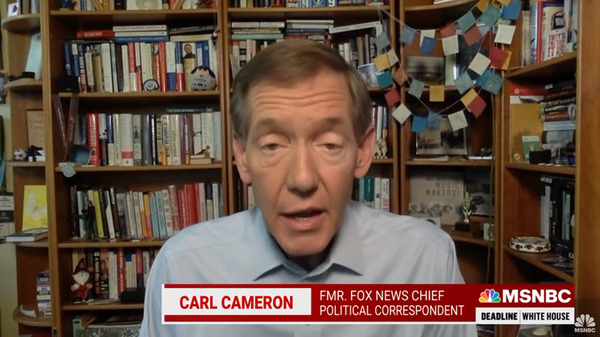 In addition, Cameron divines that, because the Buffalo shooter who killed ten people cited the “Great Replacement” theory, and because Tucker Carlson has cited a “Great Replacement Theory,” Tucker’s opinions may be partly responsible for the mass murder in Buffalo. The implicit reasoning seems to be something like this: A mentioned C. Later, B mentions C. B commits mass murder. Therefore, A may be a partial cause of C’s committing murder.

In fact, the principles for determining the cause of an event, especially in the human and social world, are far too complex for such juvenile slogans. Further, Cameron did not use the same reasoning to convict the left when its anti-police rhetoric was followed by the assassination of five Dallas police officers or when the virulently anti-Trump Bernie Sanders supporter James T. Hodgkinson shot several people and almost killed Steve Scalise. The collective left impulsively employs such juvenile reasoning when it supports killers’ goals and, magically, does not employ it when it does not.

There is, however, a more basic problem with Cameron’s call to jail journalists. With traditional theories of free speech, tracing to John Stuart Mill, one of the main problems with the effort to police speech (either figuratively, or as Cameron wants, literally) is that, because different people sincerely reach different conclusions about what is true, the best method for discovering the truth is for all sides to argue their position in a free and fair debate and then let the audience decide which side made the better case. In a free society of the sort that used to exist in the United States, the proper remedy for false speech is not less speech (censorship) but more speech (free speech). If Carlson is wrong, he will lose the public debate.

Under Mill’s argument, the only exception to near-universal freedom of speech is speech that “constitutes … a positive instigation to some mischievous act” (Mill’s “Harm Principle“). According to this principle, it is not a sufficient argument to restrict speech, let alone jail someone, to claim that someone’s speech might cause harm. For example, because a speech that urges that certain judges must be punished if they do not deliver certain kinds of decisions is a positive instigation of a mischievous act, it may be justifiable to restrict that kind of speech. However, stating that a certain judge is stupid is not itself a positive instigation of a harmful act even though it might motivate someone to harm that judge.

Further, it takes only a moment’s reflection to realize that almost any speech might cause harm. In fact, since jailing someone is an act of violence, Cameron’s own statement that Tucker Carlson and other reporters should be jailed for the sin of disagreeing with his political views is itself “a positive instigation to some mischievous act,” specifically, state-sponsored violence against Tucker Carlson and other reporters.

Thus, whereas Carlson has only stated a theory (his version of the “Great Replacement” theory), and because a theory per se does not “positively” call on anyone to perform any act whatsoever, let alone a mischievous one, Cameron’s call for government violence against Tucker Carlson is far more likely to lead some deranged person causing harm to Carlson or to others. Indeed, Cameron’s call for state-sponsored violence against Carlson is what happens in Russia.

Similarly, Nancy Pelosi’s unhinged attack on “creature” Trump might lead someone to harm Trump or his supporters. And Chuck Schumer’s threats against SCOTUS Justices Kavanaugh and Gorsuch, claiming that they “have released the whirlwind and … will pay the price” might lead a sociopath to conclude that, because Kavanaugh and Gorsuch have not paid any price, someone must act. Quite surprisingly, Cameron was nowhere to be found when Pelosi and Schumer made their bizarre dangerous statements.

In fact, those people, at the present time predominately leftists, calling to restrict free speech or jail journalists who refuse to submit to the approved script never want these same measures applied to themselves. Indeed, many leftists, so thoroughly convinced of their own goodness, seem so completely lacking in self-reflection that they literally cannot imagine that these dangerous precedents could be applied to them someday.

Finally, Cameron’s sanctimonious calls to jail reporters who, in some abstract sense, might cause harm to others are nothing more than a thinly disguised effort to seek political advantage for their own comrades. For what Cameron is really worried about is that in a free and fair debate his own, and the Left’s, transparent “falsehoods and fallacies” will be exposed, preventing them from forcing their massively unpopular policies on people and that they cannot permit. They are far too special for that. Just ask them.