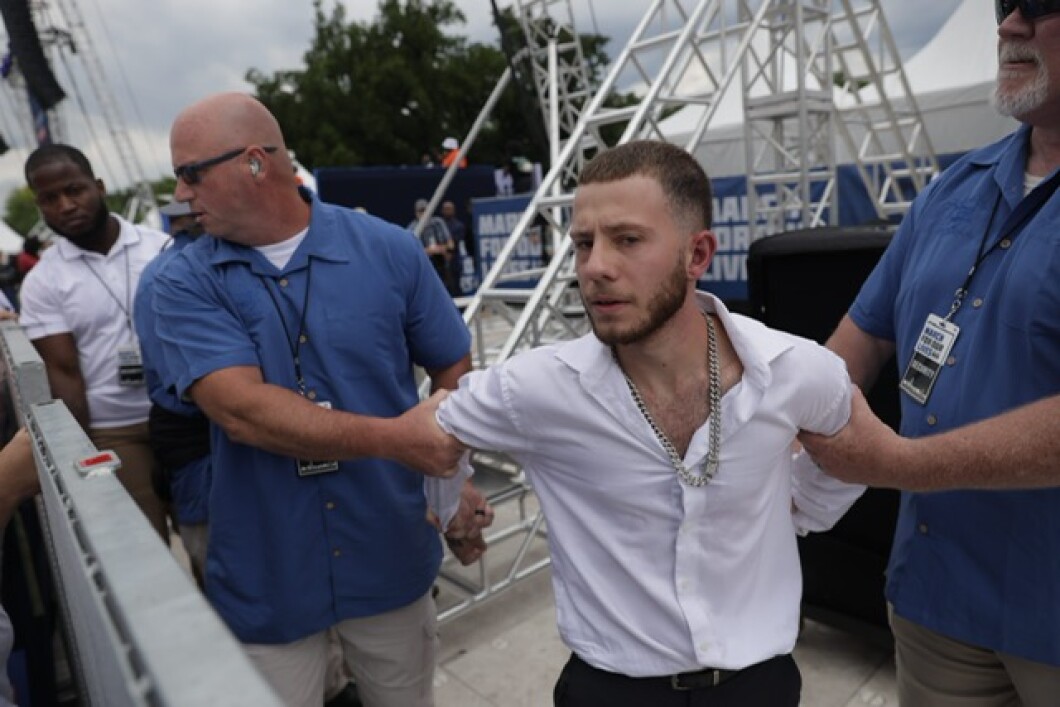 The March for Our Lives rally in Washington, D.C., hosted on the National Mall saw a man attempt to charge the stage on Saturday.

The March for Our Lives rally in Washington, D.C., hosted on the National Mall saw a man attempt to charge the stage on Saturday.

The disturbance happened during the rally’s moment of silence, a March for Our Lives spokesperson told the Washington Examiner. Reports on the scene captured the moments after the man approached, which prompted many in the crowd to hit the floor out of fear he was armed, and metal gates fell over in the chaos. The man had thrown an unidentified object into the crowd before he was detained, a reporter at the event said.

“There was no threat to the audience at any time,” the spokesperson said. “The individual was immediately removed, the organizers acknowledged the issue with the crowd, and the program continues as planned.”

“Get him out of here,” someone on the stage said, according to a video of the disruption. “Let’s not give attention.”

The crowd broke out into chants of “peace is a lifestyle” following the incident.

“Nothing to be concerned about,” an unidentified speaker assured the crowd. “Thank you all for staying here.”

Rev. Denise Walden-Glenn of Buffalo, New York, whose brother was shot years ago, was speaking at the time of the disruption.

President Joe Biden applauded the protesters in a tweet Saturday.

“I join them by repeating my call to Congress: do something,” Biden wrote.

Today, young people around the country once again march with @AMarch4OurLives to call on Congress to pass commonsense gun safety legislation supported by the majority of Americans and gun owners.

I join them by repeating my call to Congress: do something.

Lawmakers have increased calls for stricter gun control following the Uvalde school shooting in Texas that led to the deaths of 19 students and two teachers. Last week, the House passed several gun reform bills, but the proposals face stiff opposition in the Senate.

Some 450 rallies are happening around the country Saturday, including in New York, Los Angeles, and Chicago, according to march organizers.

The National Park Service, which was on the scene, per the Metropolitan Police in Washington, did not respond to the Washington Examiner’s request for comment.