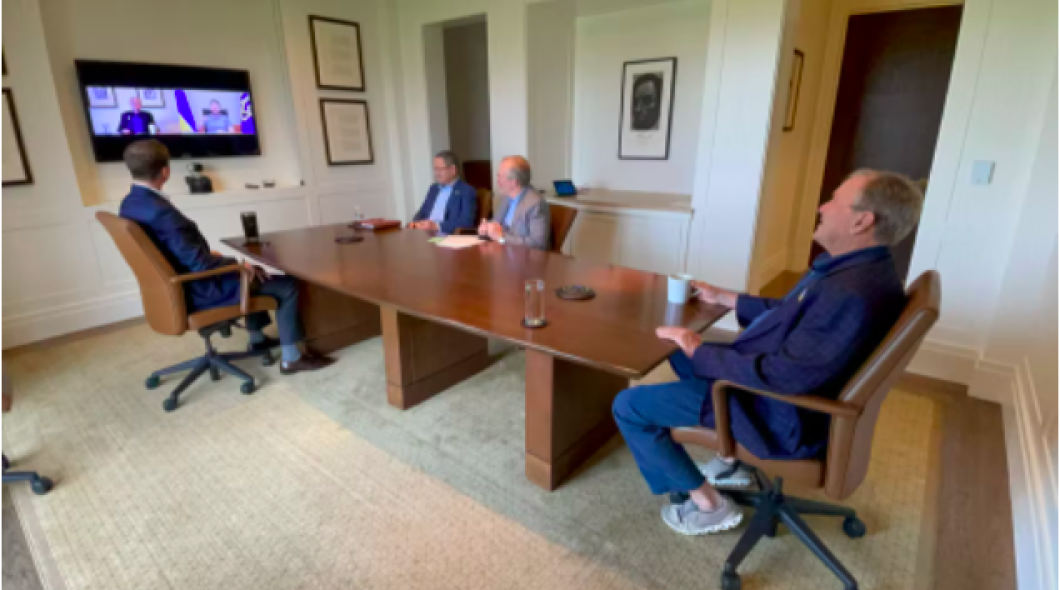 Former President George W. Bush spoke with Ukrainian President Volodymyr Zelensky on a video call on Thursday and called the world leader the "Winston Churchill of our time."

Former President George W. Bush spoke with Ukrainian President Volodymyr Zelensky on a video call on Thursday and called the world leader the “Winston Churchill of our time.”

The virtual meeting took place at the George W. Bush Presidential Center in Dallas, Texas. The two spoke for “a few minutes,” according to Bush, and the former president thanked Zelensky for “his leadership, his example, and his commitment to liberty.” Photos of the meeting and a statement from the former president were also released by the Bush Center.

“I was honored to spend a few minutes talking with President Zelenskyy — the Winston Churchill of our time — this morning. I thanked the President for his leadership, his example, and his commitment to liberty, and I saluted the courage of the Ukrainian people,” Bush said in a statement.

“President Zelenskyy assured me that they will not waver in their fight against Putin’s barbarism and thuggery. Americans are inspired by their fortitude and resilience. We will continue to stand with Ukrainians as they stand up for their freedom,” the former president continued.

Zelensky told the former president that the conversation was important to him because Bush is “an example of a strong leader,” a statement from Zelensky’s office read.

The statement noted that the Ukrainian leader recalled the 9/11 terrorist attacks and expressed to Bush that Ukrainians sympathized with the American people when the attacks took place.

“It is a great honor to meet you. I would like to thank the United States of America, the American people. I saw how people in the United States treat us on social networks, they take to the streets, support Ukraine with flags,” Zelensky told Bush, according to a Ukrainian readout of the call.

“Americans are sincere, open-minded people, and I feel it. We have common values. I feel that it is from the heart,” Zelensky told Bush.

The meeting comes as Zelensky continues to urge the sitting president, Joe Biden, to travel to Kyiv to meet with him, saying it would be a “great signal, very important signal.”

Russia’s invasion of Ukraine began on Feb. 24 and has led to the deaths of 3,280 civilians, according to the United Nations.