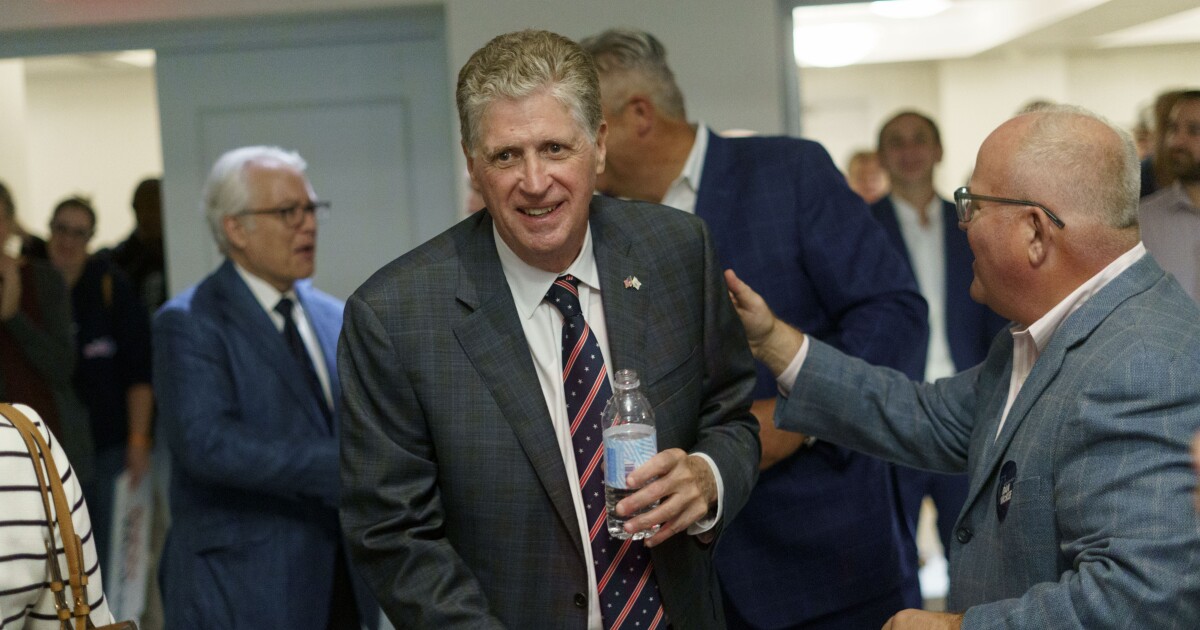 Defeated Republican gubernatorial hopeful Jonathan Riccitelli made waves in the Ocean State on Friday when he announced he was backing Democratic incumbent Gov. Dan McKee over his primary rival.

Defeated Republican gubernatorial hopeful Jonathan Riccitelli made waves in the Ocean State on Friday when he announced he was backing Democratic incumbent Gov. Dan McKee over his primary rival.

Riccitelli, who long trailed his rival Ashley Kalus in the primary showdown, chastised her campaign as “baseless,” ripped her for dishonesty, and accused her of hypocrisy for hounding McKee for debates despite refusing to debate him during the primary race.

“Although I admire her drive and aspirations, I have found the entirety of her campaign to be baseless. And to listen to Ms. Kalus call out the Governor (Mckee) in regards to his refusing to debate … she blatantly refused my call to her as I had asked the same from her and her campaign,” he wrote in a press release.

“I guess criminals stick together,” Kalus’s Communications Director Matt Hanrahan quickly shot back on Twitter. He tweeted a link to a Boston Globe article outlining a litany of charges Riccitelli faced for obstructing police over the years. Kalus handily defeated Riccitelli 87.3% to 16.3%.

After some haggling over the schedule, both sides agreed to three debates before voters head to the polls in the midterm elections.

McKee ascended to the governorship last year after his predecessor, Gov. Gina Raimondo, vacated the post to head the Commerce Department for the Biden administration. He had served as lieutenant governor at the time. He narrowly evaded a primary defeat against former CVS executive Helena Foulkes, who enjoyed a last-minute resurgence that may have been partially attributable to the backing of House Speaker Nancy Pelosi (D-CA), who was roommates with her mother in college.

Now that McKee has survived his primary, he is favored to win the governor’s race in the deep-blue Ocean State, given its political dynamics.

“Governor Mckee, a lifelong resident of this state. Former Mayor, community advocate, small business owner,” Riccitelli added. “Never left when former administrations made it difficult to conduct business here in our State, he rose to the occasion. Ashley Weinzeig-Kalus has yet to be honest with herself. We just don’t know what to expect.”

Riccitelli, who underscored that his endorsement of McKee comes without “hesitation,” is not the only Rhode Island Republican to buck the party. Democratic congressional contender Seth Magaziner recently rolled out endorsements from four former election Republican officials, including former Rep. Claudine Schneider (R-RI), who was the last Republican to hold Rhode Island’s 2nd Congressional District, which Magaziner is vying for against former Cranston Mayor Alan Fung.

“The Republican Party of today is not the one that inspired me to run and represent the Second Congressional District in 1980,” Schneider wrote in a letter, the Public’s Radio reported. “It is now the party of insurrectionist Donald Trump.”

Fung, who has been coy about his views on former President Donald Trump, is widely regarded as one of the most competitive Republicans to vie for the state’s 2nd Congressional District in decades. He previously ran competitive races for governor against Raimondo in 2014 and 2018. The Cook Political Report ranks the race as a toss-up.