Almost makes you wonder if Democrats planned it this way.

Democrats Blame Inflation on ‘Greed,’ Instead of Their Own Failed Policies – American Thinker<!—->

Inflation, over the past year, has gone from conspiracy theory, to transient, to no big deal, to ignored, and now finally reluctantly acknowledged by the ruling class. Yet to consumers paying more for groceries, restaurant meals, airline tickets, and gasoline, it is painfully real.

Democrats in Congress and the White House are reticent to take any responsibility for inflation with their reckless spending and deliberate hampering of getting petroleum products out of the ground and into cars and homes.

After presiding over a more than doubling of gasoline prices during his first year and a half in office, President Biden is adding fuel to the inflationary fire by canceling offshore oil lease sales in Alaska and the Gulf Coast. Gas prices hovered around $2 per gallon during most of 2020 only to set records four days in a row this past week, settling at $4.44 per gallon, hence the ubiquitous Joe Biden “I did that” stickers peppering gas pumps nationwide.

Not only fuel, but also food prices, increasing at the fastest rate in 40 years according to the US Department of Agriculture. For example, meats, poultry, fish, and eggs are up 14 percent with fruits and vegetables costing 8 percent more.

And that assumes you can find these items. Baby formula stocks are low and getting worse, according to CNN, now at a 40 percent out-of-stock rate. What’s the solution? Rather than keeping American grocery store shelve stocked with baby formula, the Biden administration is shipping available supplies to our open southern border to feed migrant children. Or to Ukraine, along with $40 billion in aid which could be better spent on crumbling American infrastructure. The answer for hungry American babies? Get in line or make your own formula.

What do the money mavens say? Federal Reserve Chairman Jerome Powell can’t promise a “soft landing” for the U.S. economy, acknowledging the possibility of a recession. One more quarter of negative GDP and we are officially in a recession. The Fed promises small interest rate hikes to fight inflation, but with a $30 trillion national debt, every percent interest rate increase translates to $300 billion more in annual interest payments. This is money we don’t have.

We can always borrow money to pay interest to those we borrowed the money from. That makes sense. As much sense as just printing money to pay our expenses, worsening the inflation we are supposedly trying to fight. When in a hole, stop digging.

It’s convenient for the White House to blame Russia’s Ukraine invasion for inflation but economic history paints a different picture. As reported by Fortune, at the time of the invasion, inflation was already at 7.5 percent and gasoline cost $3.54 a gallon. The Russia-Ukraine war is making things worse, but inflation was already here before the war. Nice try.

Rather than applying basic economics to our looming problems of inflation and stagflation, Democrats have contrived a theory as nonsensical as blaming Donald Trump for Joe Biden’s policy decisions. The Washington Post coined this approach “Greedflation”:

The theory goes something like this: The reason prices are up so much is that companies have gotten “greedy” and are conspiring to “pad their profits,” “profiteer” and “price-gouge.” No one has managed to define “profiteering” and “price-gouging” more specifically than “raising prices more than I’d like.”

The problem with this narrative is that it’s just a pejorative tautology. Yes, prices are going up because companies are raising prices. Okay. This is the economic equivalent of saying “It’s raining because water is falling from the sky.” Well, why?

The greedflationists argue that something fishy is afoot because companies are not merely “passing along” their higher costs; their profit margins are expanding, too. But this is exactly what you’d expect when flush customers are buying more stuff and willing to pay whatever’s necessary to get what they want. Prices and profits rise.

At best, this approach has done nothing to curb inflation. Worse, it has distracted Democrats from taking actions that could help, because this “greedflation” narrative has persuaded both policymakers and the public to misdiagnose the problem’s causes. 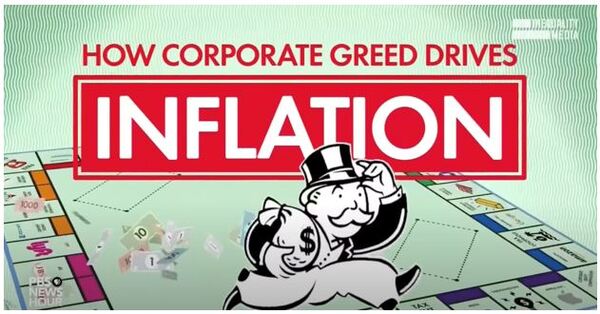 How convenient to blame one’s own failed policies and solutions on some bogeyman, whether “the rich” or cigar-chomping “greedy price-gouging corporatists.” While at the same time, Congress has no hesitation in spending $40 billion of taxpayer money, which we actually are borrowing, to fund a proxy war against Russia where we have no vital national interest.

Ignoring the real causes of inflation means that any policy prescriptions out of Washington D.C. will make the problem worse rather than better.

Not all countries are suffering American levels of inflation. For example, the inflation rate in Japan is 0.6 percent, Saudi Arabia 1.1 percent, and Bolivia 0.9%. Yet in America and much of the West, we are in real double-digit territory with no sign of improvement.

Is this simply economic stupidity? Doubtful as even the likes of Rep Alexandria Ocasio-Cortez has an economics degree from Boston University. Even if she wasn’t the brightest student or slept through most of her classes, she and her congressional colleagues understand the utter foolishness of borrowing and spending money we don’t have.

Or is this approach more sinister?

Former Soviet Premier Vladimir Lenin correctly observed, “The way to crush the bourgeoisie is to grind them between the millstones of taxation and inflation.” This is exactly what is happening in America. Democrats want tax increases to fight inflation, which even the corporate media recognizes as “reckless.”

What better way to demoralize and destroy a society than by making the people poor and hungry? Which is exactly where we are headed.

Brian C. Joondeph, M.D., is a physician and writer.

And on Truth Social @BrianJoondeph.