We have already established our military mastery; we don't need to weaken Putin any further.

Do We Really Want to Take Out Vladimir Putin? – American Thinker<!—->

For undying enmity toward Mother Russia, Ukrainians have good cause. It can be traced to a single Ukrainian word — “Holodomor” (derived from “holod, meaning hunger, and “mor,” meaning extermination). The word refers to a single event, the famine of 1932-3. This “famine,” however,” did not come from an act of nature, but from government policies — the government at that time being not exactly Russia, but rather the Union of Soviet Socialists Republic, which was close to the same thing.

In keeping their socialist, “equitable,” agenda, the Soviets, under Joseph Stalin, took over private farms and formed collectives. The Soviets set quotas for crop production for them, reserving a portion for the government. On this endeavor, Patrick J. Kiger of History writes:

Collectivization in Ukraine didn’t go very well… it became apparent that Ukraine’s grain harvest was going to miss Soviet planners’ target by 60 percent. There still might have been enough food for Ukrainian peasants to get by, but, as [Anne] Applebaum writes, Stalin then ordered what little they had be confiscated as punishment for not meeting quotas.

At least 3.9 million, or about 13 percent of Ukrainians, starved to death. At the same time, the Soviets exported more than a million tons of grain to the West.

Of course, under the Soviets, at least 1.1 million Russian farmers starved also, but their survivors have no nationality to blame — only an evil, delusional ideology. Ukrainians have more — the ideology, and the nation that brought it to them. For this, and for more, Ukrainians have good cause for their enmity.

But, in recalling their afflictions, especially under Stalin (who, incidentally, was not Russian, but Georgian), it is appropriate to also recall that Ukrainians did not have to fight the Soviets/Russians for their independence — that the Soviets were not brought down by armed rebellion, but by, at the highest levels of Soviet leadership, a loss of confidence in the socialistic ideology that led to the USSR’s creation.

In other words, after 74 years of party rule, after often incurring great sacrifice to others, if not to themselves, it was brought down its own leadership coming to the conclusion that, after all those years, “We were wrong.”   Because of that admission — probably unique 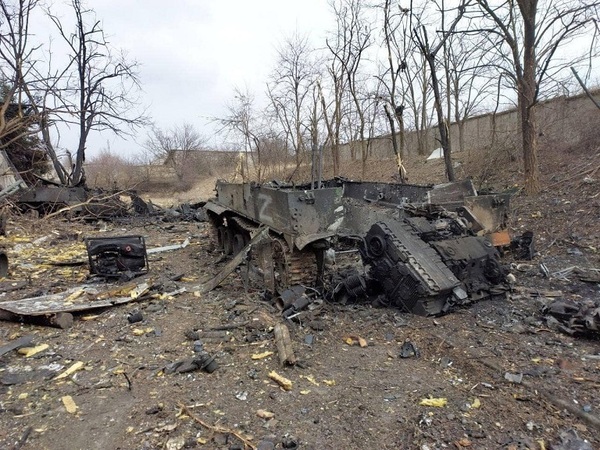 in the annals of world empires — the world has been spared of much grief. And the man most responsible for it was the last president of the Soviet Union, Mikhail Gorbachev.

A decade later, in 2000, Vladimir Putin took leadership of Russia, which he would, formally or informally, hold to this day.  In a 2019 BBC interview, Gorbachev was asked about Putin’s repeatedly extended rule. He answered:

“[Vladimir Putin] inherited such chaos and everyone saw he stopped the chaos and literally took everything on himself. From press reports we are hearing that the people want him to stay on and finish the job.

In the spring of 2022, Vladimir Putin launched an invasion of Ukraine; Western nations, including the United States, responded by sending top-level weaponry to Ukraine, and the invasion has stalled.

Presumably, such aid was defensive in nature, to protect Ukraine’s independence.

In April, however, Secretary of Defense Lloyd Austin stated “We want to see Russia weakened to the degree that it can’t do the kinds of things that it has done in invading Ukraine.”

This is a much more open-ended objective. At what point would Austin — and other strategists, strategists responsible for the desertion of allies and American citizens in Afghanistan and other misadventures — determine that Russia had been sufficiently “weakened?”

What if they overdo it, and Putin is killed or removed from power? Would chaos return to the Soviet Union? Would that be an unintended and unwelcome consequence? Or is that our intent?  Or, at least, the intent of those unknown people who actually run the Biden administration? Do we want chaos in Russia?

In an earlier, 2016 interview, Gorbachev explained why he stepped down from power.  He said that Russia was heading toward civil war, and he asked:

Can you imagine a split and a power struggle in a country like ours? Overflowing with weapons, including nuclear ones?

We’ve heard Austin’s song before. We heard it in Afghanistan, where we stayed many years after our original objective was achieved. We heard it in Iraq, and we heard it in Libya — where we intentionally facilitated death of Moammar Qaddafi. We spread chaos, and Muslim jihadists reaped the harvest. And now these nifty strategists want to “weaken” Russia?

Depending on the source, there are an estimated 14 to 25 million Muslims in Russia.  Now, maybe they are peace-loving, and maybe they are not, but their scriptures — the ones that are not abrogated — and their history suggest that they are not. In conditions of chaos, Muslims would likely raise the most organized military force, and it would have international assistance. In a chaotic scenario, they might well prevail. An Islamic Russia, with nuclear arms?  What then, Secretary Austin?

A famed Chinese general of antiquity, Sun Tzu, advised, once you have demonstrated your mastery over an enemy, “Build your opponent a golden bridge to retreat across.”

We have already established our military mastery; we don’t need to weaken Putin any further.  Build that bridge, Secretary Austin, so Putin’s forces can leave Ukraine, and the war end.