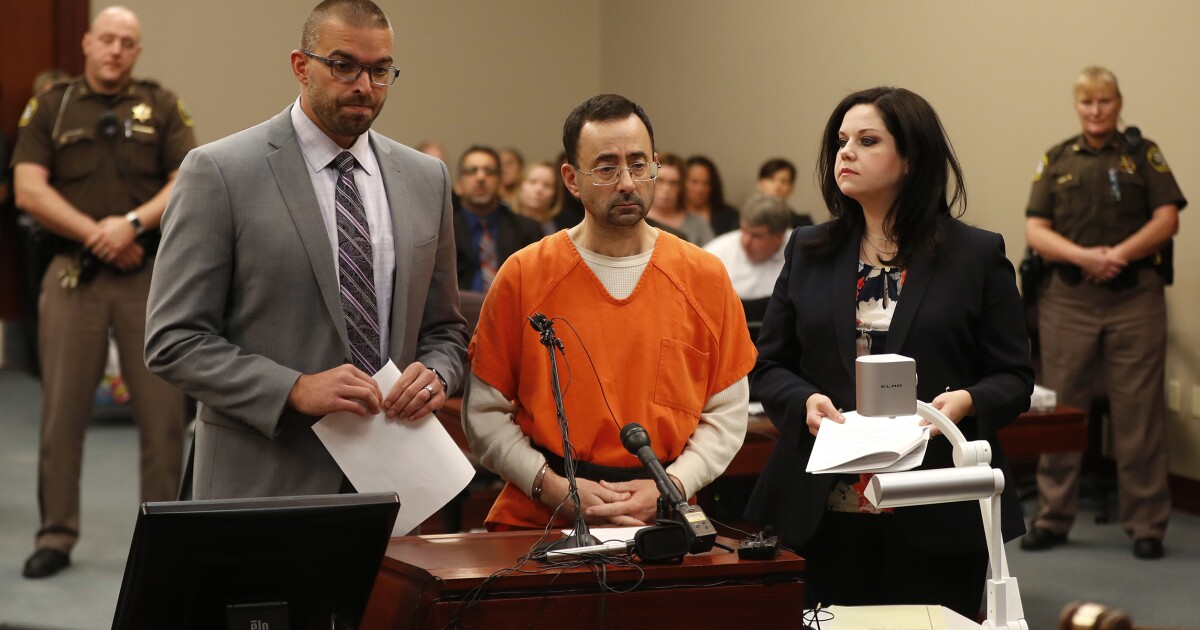 The Department of Justice is sticking to its decision not to charge FBI agents accused of botching the sexual abuse investigation into former USA Gymnastics team doctor Larry Nassar, a now-convicted sex predator, and lying to the agency's inspector general.

The Department of Justice is sticking to its decision not to charge FBI agents accused of botching the sexual abuse investigation into former USA Gymnastics team doctor Larry Nassar, a now-convicted sex predator, and lying to the agency’s inspector general.

Monaco told lawmakers in October the attorney general was reviewing the controversial decision not to prosecute FBI agents accused of botching and lying about the explosive case involving the sexual abuse of the U.S. gymnastics team. Monaco, who had been personally criticized in September during a congressional hearing by victims of Nassar, said the DOJ was “reviewing this matter” after the department was harshly criticized for not holding the FBI agents accountable.

“I do want the committee, and frankly, I want the survivors to understand how exceptionally seriously we take this issue. And we believe that this deserves a thorough and full review,” Monaco told the Senate Judiciary Committee last fall.

Monaco was slated to testify about efforts to reauthorize the Violence Against Women Act, but she was quickly grilled about the department’s handling of the case against Nassar.

USA Gymnastics conducted an internal investigation into sexual assault allegations leveled against Nassar, and USA Gymnastics CEO Stephen Penny Jr. alerted the FBI’s Indianapolis Field Office in July 2015. But the FBI did little to follow up.

Michael Langeman, the FBI supervisory special agent who interviewed Maroney in 2015 about her claims, was fired from the FBI ahead of last September’s hearing. Langeman had been a lead agent at the FBI’s Indianapolis Field Office. DOJ Inspector General Michael Horowitz’s July report concluded that he and former Indianapolis Field Office Special Agent in Charge W. Jay Abbott lied to the department watchdog. The DOJ watchdog’s inquiry concluded that “Abbott violated FBI policy and exercised extremely poor judgment under federal ethics rules,” such as when Abbott “communicated with Penny about a potential job opportunity with the U.S. Olympic Committee” while continuing to discuss the FBI’s Nassar investigation with Penny. Abbott retired years ago.

Abbott’s actions “reflect violations of the FBI’s long-standing code of conduct and the ethical obligations for all FBI employees,” Wray said, noting he retired in January 2018 “before any review launched.”

“It’s extremely frustrating that we’re left with little disciplinary recourse when people retire before their cases can be adjudicated,” he said. “I’m deeply and profoundly sorry to each and every one of you.”

Wray took over the FBI in 2017 after the firing of James Comey, during whose tenure the FBI botched the Nassar case. Wray testified he didn’t know if Comey was aware of the Nassar case before 2016.

Sen. Dick Durbin (D-IL), the chairman of the Senate Judiciary Committee, told Monaco he was shocked at the decision not to prosecute the agents.

“What is your response to the criticism over the department’s decision not to prosecute these FBI agents?” Durbin asked.

The query prompted Monaco to reveal that the assistant attorney general for the criminal division, Kenneth Polite, was conducting the review, and she claimed it was a top priority for the department.

“I think you could be assured there is a sense of urgency and gravity with the work that needs to be done,” Monaco said at the time.

“While the Justice Department’s Office of Inspector General has outlined serious concerns about the former agents’ conduct during the Nassar investigation and also described how evidence shows that, during interviews in the years after the events in question, both former agents appear to have provided inaccurate or incomplete information to investigators, the principles of federal prosecution require more to bring a federal criminal case,” the Justice Department claimed Thursday.

Maroney criticized Monaco for not showing up to testify.

“The Department of Justice refused to prosecute these individuals. Why?” Maroney said. “Deputy Attorney General Lisa Monaco couldn’t even bring herself to be here today, and it is the Department of Justice’s job to hold them accountable. I am tired of waiting for people to do the right thing — because my abuse was enough, and we deserve justice.”

Durbin asked Horowitz in September whether the “deliberate misrepresentations” by Abbott and Langeman reached the level of criminal violations.

“They violated criminal law sufficiently that — what we do at that point is make the referral to prosecutors to assess them because that’s who needs to make the assessment whether or not there will be charges brought,” Horowitz said.

Monaco said in October that she was outraged by the inspector general’s report and apologized to the victims.

“I am deeply sorry that in this case, the victims did not receive the response or the protection they deserved,” she said.

Nassar pleaded guilty in 2017 to federal charges of child pornography and tampering. Combined with a guilty plea in Michigan state court to counts of sexual assault, that sets Nassar up to spend the rest of his life in prison.

“We will continue to learn from what occurred in this matter and undertake efforts to keep victims at the center of our work and to ensure that they are heard, respected, and treated fairly throughout the process, as they deserve,” the Justice Department said Thursday. “To that end, the department has continued to assess gaps in the law to protect the most vulnerable among us from exploitation. Addressing those gaps could help prevent events like this from taking place in the future and hold perpetrators accountable. We stand ready to collaborate with Congress to do so.”