Any madman can act out a preferred fantasy, either for attention or for self-gratification. Getting an entire culture to accept this fantasy in the place of reality is something else entirely.

The inclusion of “ingenious” describing the title character is a curious choice, given that Don Quixote is, in fact, a crazy old man named Alonso Quixano that imagines himself a gallant knight.  He mounts his trusty steed (a skinny nag) and dons his shining armor (with a shaving basin for a helmet) in order to fight giants (that are, in reality, windmills), while his trustworthy squire (his short, fat, yet profoundly loyal servant named Sancho Panza) supports his quest to win the hand of his Dulcinea del Toboso (a chaste maiden that he invents in his mind).

In short, Alonso Quixano is delusional, and, in throes of his madness, he is bent on imposing his own self-perception upon the world around him.  So, how is it that he could be “ingenious?”

Particularly later in the novel, “the narrator and several characters observe” that he is “remarkably intelligent and knowledgeable.”  But Rivka Galchen, writing in the New York Times, suggests that Don Quixote may not be so much crazy as he is calculated, and deviously self-serving:

I didn’t, on that first reading [of the novel], pay much attention to the way that Don Quixote’s delusions often made others suffer.  Thirsty mules can’t drink from their trough because Don Quixote insists it’s a baptismal font; Sancho Panza is roughed up after Quixote doesn’t pay his hotel bill; and on and on. …

At a later moment, the book seemed to me to be about what a power move it is to be “eccentric” and how that eccentricity coerces others into serving your fantasy.  I found Quixotism in the world to be at times irritating, and at times cruel, and at times I saw the heroism of Don Quixote’s friends and neighbors, the “normal” people. [emphasis added]

Any madman can act out a preferred fantasy, either for attention or for self-gratification.  Getting others to go along with that fantasy requires some guile and forethought.  Getting an entire culture to accept this fantasy in the place of reality requires something more.  It requires a society that is chock-full of sympathetic enablers who are willing to accept as fact what is obviously a fantasy.

As Galchen observes, Quixote’s self-indulgence in the fantasy isn’t the point.  Rather, the imposition of his fantasy upon others is the point — a “power move” of “eccentricity” which forces those around him to take part in the charade.

In many ways, Quixotism and the hypermodern notion of transgenderism are quite the same.

Both are conceived as a reflection of traditional societal touchstones, for example.  Alonso Quixano imagines himself to be the wealthy and revered Don Quixote, and he makes efforts to look, dress, speak, and act in a manner that the society around him would recognize as authentic.

Similarly, a perfectly average male collegiate varsity athlete named Will Thomas of the University of Pennsylvania imagines himself to be a woman named Lia Thomas, making some efforts to look, dress, speak, and act as the society around him would expect of an authentic woman.

Both fail at that task in the eyes of the audience and onlookers, of course, and both appear as caricatures rather than authentic.  But both have people around them that find the delusion fascinating, and who are eager to take part.

Early in the novel, Quixano visits a lowly inn that serves only moldy bread and salt fish for a Friday Lenten dinner, served by prostitutes.  Quixano treats the innkeeper as a castle lord, the food as delicacies, and the prostitutes as fair maidens.  All were curiously thrilled by their involvement in the fantasy, and they play along.

What follows is the scene which Galchen references, when Quixano asks his landlord (whom he imagines to be the lord of a great castle) to dub him a knight.  The landlord indulges his imagination, agreeing to grant him knighthood at dawn.  Quixano places his weapons in a horse trough (which he fancies a holy font), and when another traveling customer looks to use the trough to water his mules, Quixano attacks him.  And yet, the landlord indulges his eccentricity, asking him to wait just a few hours until dawn until the moment of his being dubbed a knight.  The other customers were inconvenienced, and the poor beasts went thirsty in those hours before dawn.

But there are those who are exhilarated to have been involved in the fantasy.  A female reporter interviewed the tall, strapping lad who had just defeated all the women in the pool while pretending that he is a woman.  The juxtaposition of these two “women” next to one another somehow made the fantasy all the more farcical, as some clever critics have observed. 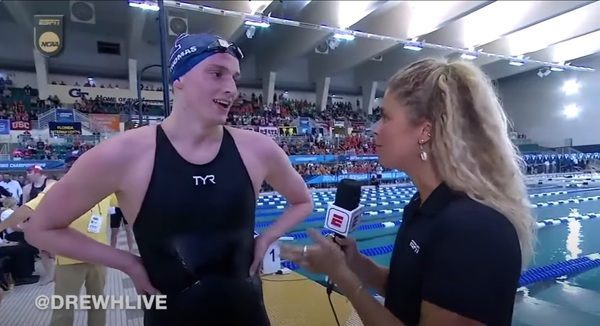 Even over at Fox News, they indulge in the fantasy.  On their estrogen-fueled morning show, Outnumbered, Emily Compagno speaks of Will “Lia” Thomas, saying that “she is the first transgender athlete to be crowned NCAA champion,” but that “critics say that she has an unfair physical advantage.”  Enablers of his delusion abound.

There are also those who suffer as a result of Will Thomas’s delusions.  Namely, those women who are excluded from titles in their rightful field of competition because, quoting Rivka Galchen, one person’s “power move” of “eccentricity coerces others into serving” that individual’s preferred fantasy.  The victims of this particular delusion are clearly defined.  Virginia’s Emma Weyant won silver in the Tokyo Olympics last year, but she and her university were denied their rightful championship in the event that Will Thomas won.  Reka Gyorgy of Virginia Tech placed 17th in her final NCAA performance of the event — one spot away from an opportunity to swim in the finals because the top spot was occupied by a man pretending to be a woman.

The “Lia” Thomas saga is a high-profile embodiment of transgenderism, which is, as an ideology, no less a fantasy to us “normal” people than an old man pretending to be a powerful knight would be for early seventeenth-century Spaniards.  And it’s nowhere closer to being a convincing fantasy.  But making this fantasy a convincing substitute for reality for you, as an onlooker, is not the point.  The point is that you will accept this large-scale indulgence in a ridiculous fantasy as a substitute for our reality despite your knowing, quite well, that what you’re being forced to acknowledge as truth is, in fact, the furthest thing from the truth.

That is the endpoint that the pushers of transgender madness seek: compliance with lies. There is immense satisfaction to be had in your coerced submission to, and acceptance of, their lies.