Massive election fraud in 2020 is a conspiracy, but it is no longer merely a theory.

Many conservative commentators have noted that Dinesh D’Souza’s documentary, 2000 Mules, offers compelling evidence of large-scale vote fraud.  It offers more than this, though.  It provides compelling evidence of a massive, centrally coordinated conspiracy to commit vote fraud.  Examining several states with different voter laws while focusing on just one form of fraud, the movie found that the method of fraud was executed identically in each of these states.  That is prima facie evidence of central organization and management.

From the moment counting was stopped in the dead of night in five Democrat-run swing states on election night, Democrats and the media have treated anyone who questioned election integrity in 2020 like a mob boss treats anyone who threatens to testify against him: shut up, or we will cancel you.

Democrats and the media routinely smear anyone who questions the election results as a conspiracy theorist.  They routinely pronounce any evidence that emerges as “debunked.”  For the record, “debunked” does not mean “inconvenient to the leftist narrative.”  It means “thoroughly investigated and proven to be false.”  Almost none of the evidence has been debunked; very little has been officially examined.  Leftists treat actual evidence like how a vampire treats a crucifix.  There is no reasoned discourse, just a lot of hissing and snarling.

From well before he took office, Donald Trump faced an ongoing administrative coup attempt.  First was the long-running Russian collusion hoax, mounted by Hillary Clinton and the Democratic National Committee and abetted by the FBI and intelligence agencies.  Federal employees who were, theoretically, subordinate to Trump gleefully worked to undermine his administration.  Two baseless impeachments were mounted against him by Democrats who know nothing other than shrieking partisanship anymore.  The slow-moving coup finally succeeded on the evening of November 3, 2020, when those five states quit counting ballots to give Democrats time to “fortify” the election.  The last real hurdle to thwarting election integrity came on December 11, 2020, when the Supreme Court ruled that Texas and 18 other states lacked standing to complain of massive fraud.  How states that conduct honest elections lack standing to complain of states that don’t in an election that affects them all is beyond my understanding.  It looked like unconditional institutional surrender to massive fraud to me.  All hail the barbarians!

Partisan media outlets began crowing that many courts had “investigated” claims of fraud and found them baseless.  Rather, almost all courts refused to even look at any evidence, dismissing almost all claims on procedural, rather than substantive, grounds. Refusing to look at evidence is not an investigation.  A trickster can pat mud over a rock to change its shape, but time and tide will wash away the mud, leaving only the rock of truth — and then the fraud is exposed.

D’Souza’s documentary examined only the slice of fraud that involved organized physical ballot-stuffing.  It did not touch on compromised voting machines and systems or unconstitutional, administrative election law changes.  If the single slice that 2000 Mules so effectively biopsied is filled with the cancer of fraud, it is willful ignorance to believe that everything else was clean.

If the election of 2020 had been fundamentally clean, Democrats and the media should have been the loudest advocates for a thorough and bipartisan investigation of the election to put widespread doubts to rest and own the conservatives.  (By bipartisan, I do not mean like the J6 committee, where the Democrats unilaterally appointed all members, including a couple of Republican chumps for show.)  Instead, the left hisses and snarls at every piece of evidence brought forth, no matter how compelling.  A guilty man tries to suppress every bit of evidence at his trial, never knowing which piece will seal his conviction, while an innocent man tries to get every piece into evidence he can, never knowing which piece will exonerate him.  To assess credibility on this, look who is trying to suppress evidence and who is trying to get evidence into the public record.

At this stage, it is hard to credit Democratic and media intransigence to anything innocent.  If they are not just stupid, they have become co-conspirators in the only actual insurrection America has seen over the last six years.  Understand, this coup was not primarily aimed at Trump and conservative Republicans; it is a coup against the very idea of self-government.  Alas, many Republicans may disagree with elements of Democratic methods but agree with them that a self-serving elite class should rule the citizen-serfs they think constitute the American people.

The relentless smears, the constant howls, and the shrieking rage of the leftists are not because they are so offended that the right would challenge them.  It is because the mud of massive deception is being washed away to reveal the rock of stark fraud the left mounted to steal an American presidential election.  That is genuine insurrection.  Confession, repentance, and forfeiture of all offices of public honor or trust by the conspirators could begin to establish American honor and liberty anew.  That, of course, will never happen.  Power is the left’s only god, and pursuit of it by any means its only liturgy.

Republicans will win by unprecedented margins in November.  If they hold the left to account for its depredations against the American system of law and systemic attack on the Bill of Rights, we can begin to crawl out of this hole of despotism.  If, instead, the Republicans largely choose to let bygones be bygones, as they have done with the Russian collusion conspirators, there is little hope that America can long survive as anything the founders would recognize.  Renewal will come.  Americans will not forever submit to be ruled by any class of people — and certainly not to this degenerate class of aspiring despots.

However it comes, D’Souza’s documentary is the seminal moment the tide washed away enough mud that, despite their shrieks and howls, the left can no longer hide the ugly truth of what it did.  Massive election fraud in 2020 is a conspiracy, but it is no longer merely a theory. 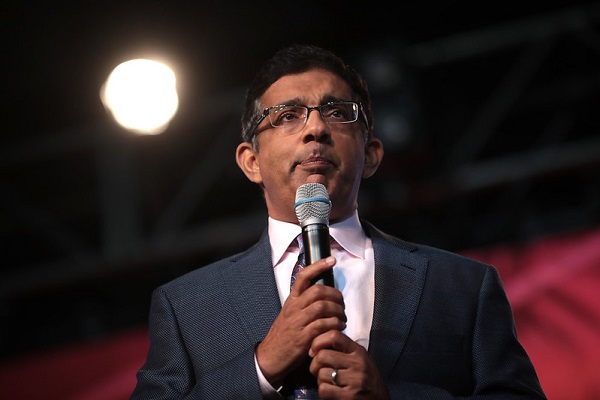