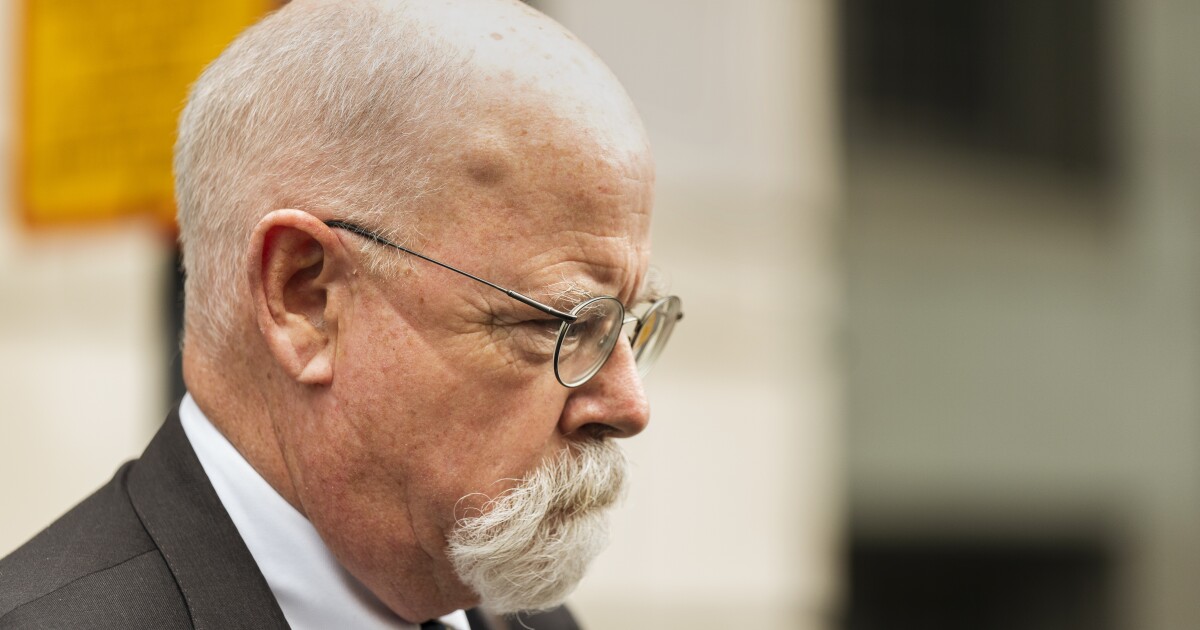 As revealed in trial that is part of John Durham’s special counsel inquiry, the electronic communication marking the opening of the investigation wrongly cited a nonexistent “referral” from the Justice Department rather than correctly saying the Alfa-Bank allegations came from a lawyer for Hillary Clinton’s 2016 presidential campaign. The opening communication, titled “Alfa Bank,” was authored by FBI agents Curtis Heide and Allison Sands, both of whom testified this week in Washington, D.C., and the investigation initiated on Sept. 23, 2016, four days after Sussmann’s meeting with FBI General Counsel James Baker.

Sands and Heide both referred to the glaring errors as “typos” and Heide suggested it was possible they may have conflated the FBI’s Office of General Counsel — which Baker led — with the Justice Department. The closing communication for the investigation in January 2017 also wrongly claimed the Alfa Bank allegations were referred to the bureau by the Justice Department rather than from Sussmann.

Sussmann, a former Perkins Coie lawyer who represented the Democratic National Committee when it was hacked in 2016, is on trial after being charged with lying to the FBI about whom he was representing when, in September 2016, he presented internet data that suggested a since-debunked link between former President Donald Trump and Russia’s Alfa-Bank. In particular, Sussmann was indicted on charges of allegedly concealing his clients — Clinton’s 2016 presidential campaign and “Tech Executive-1,” known to be former Neustar executive Rodney Joffe — from FBI general counsel James Baker. Sussmann denies lying to the FBI and has pleaded not guilty.

Sussmann had worked at the Justice Department in the past, and testimony from Baker last week stated that he had a badge that allowed him access to the FBI.

A number of top FBI officials were copied on the flawed launch document, including Deputy Assistant Director Jonathan Moffa, agent Joseph Pientka, since-fired agent Peter Strzok, and two others. Strzok authored the opening electronic communication for Crossfire Hurricane in July 2016. Heide was working on part of that Trump-Russia investigation too.

HILLARY CLINTON SIGNED OFF ON SHARING ALFA-BANK CLAIMS WITH MEDIA

Sands was a probationary agent at the time — in fact she had been on the job for just three and a half months — but was made the lead case agent for the Alfa Bank investigation. Heide was her training agent, and he described them as co-leads on the case. Sands said she first learned of the Alfa Bank claims when Heide sent her a white paper and told her they were going to open a case.

Sands said it was her understanding at the time that the information had come as a referral from DOJ, though she said she later learned it had come to Baker at the FBI. She did not learn the identity of the anonymous third party. Sands testified that the directive to open the case came from the FBI leadership, saying the investigation had “headquarters interest.”

“We had asked numerous times” who the source was “and we elevated to headquarters,” Sands said. “We were told that headquarters was working on it, that they were aware, and that we should at the division level focus on the technical analysis,” Sands also said.

The case identification was “Alfa Bank, Russia — Contacts / Agents, Sensitive Investigative Matter,” and the opening document said it “documents the opening of a Full Field Investigation into the network communications between a U.S.-based server and the Russian ALFA BANK organization.” Enclosed was a “White Paper.”

“On or about September 19, 2016, FBI received a referral of information from the U.S. DEPARTMENT OF JUSTICE, detailing an unusually configured email server in Pennsylvania belonging to the TRUMP ORGANIZATION,” the FBI wrote in September 2016. “In that referral, the DEPARTMENT OF JUSTICE provided the FBI with a white paper that was produced by an anonymous third party. According to the white paper, a U.S.-based server that is owned by the TRUMP ORGANIZATION has been communicating with the Russian-based ALFA BANK organization in Moscow, Russia.”

The Alfa Bank investigation was closed in January 2017 and the closing communication was written by Sands. It also contained multiple errors.

“Chicago opened captioned Preliminary Investigation on alleged covert communications between Russian based ALFA BANK and an email domain affiliated with the TRUMP ORGANIZATION,” Sands had written. “On or about September 19, 2016, FBI received a white paper that was produced by an anonymous third party from the U.S. DEPARTMENT OF JUSTICE.”

Sands testified, “By January I knew … that it came at least from the FBI from James Baker.” It also wasn’t a preliminary investigation, but a full investigation. Sands said “that’s just a mistake.”

She said, “In hindsight, I would’ve changed the typos in the ECs.”

Sands said she believed the referral had come from the DOJ when she opened the case, although she now knows it came from Baker. She said the incorrect information came to her from Heide. She believed at the time that an “anonymous third party” provided information to the DOJ which then gave it to FBI. She said she did not believe Heide had lied to her, nor that someone had lied to him, and had not heard of any criminal investigation into why that information was wrong.

Durham prosecutor Brittain Shaw raised the possibility that she may have thought that the FBI’s Office of General Counsel was part of the Justice Department, but Sands said she didn’t know.

“I don’t recall,” Sands said, adding, “I would never be intentionally vague in an EC.”

Heide was also doing work at that time on the Crossfire Hurricane investigation, specifically related to Trump campaign associate George Papadopoulos. He admitted at trial that the FBI is reviewing whether he intentionally withheld potentially exculpatory information related to the investigation.

Heide recalled drafting the opening communication, and called it “a mistake on our paperwork.”

Heide said that he and Sands “may have both drafted portions of it.” He called the error “a mistake,” but stressed “I don’t believe we did know” at the time that it was wrong.

Heide said he thinks the first time he learned about the error was at an October 2018 meeting as part of a DOJ watchdog investigation of the matter. “I believe they brought it to my attention and asked if it was accurate,” Heide said. He testified, “We may have conflated the Office of General Counsel and the Department of Justice.”

Heide repeatedly referred to the glaring mistake as a “typo.”

He also spoke about the closing electronic communication, noting that “I believe we knew” by then that the allegation had not been referred by DOJ, but that it was “improperly documented.” He said the “couple of mistakes” may have been “copy and pasted.”

Pientka wrote to Heide on Sept. 21, 2016, “People on 7th floor [FBI leadership] to include Director are fired up about this server … Did you guys open a case? Reach out and out tools on? … If not I will call Dan as Priestap says its not an option — we must do it.” Heide replied, “Roger, we are opening CI [counterintelligence investigation] today.”

“Dan” was a reference to Wierzbicki, Heide’s boss in Chicago. Bill Priestap was the assistant director of the FBI Counterintelligence Division, and he testified this week that he doesn’t recall this and doesn’t remember being involved in the opening.

Ryan Gaynor, currently an FBI special agent in charge of national security in Norfolk, Virginia, said he volunteered to assist FBI headquarters with the Alfa Bank investigation a few days after the FBI received the information in 2016. He offered to “track” the case for headquarters.

Heide emailed Gaynor on Oct. 3 that “we really want to interview the source of all this information.” Wierzbicki agreed, saying, “An interview with the source of information … may allow us to understand the ‘what’ and ‘why’ of the white paper.” Gaynor replied the next day “got it and being discussed at headquarters.”

Gaynor said Monday that FBI headquarters leadership “made the decision not to share the identity of Mr. Sussmann with the field.” He repeatedly described what he believed he’d been told was a “close hold” preventing the disclosure of Sussmann’s identity.

Defense attorney Sean Berkowitz grilled Gaynor on his October 2020 interview with the prosecution, during which he had apparently said there wasn’t a deliberate instruction for a close hold. He testified Monday that he just did not recall at the time that there was a close hold.

Gaynor apparently said in October 2020 that it was possible he told FBI Chicago that they couldn’t interview the source but he couldn’t remember specifically. He said Monday that he thought there was a lot of “conflation of issues” during the 2020 discussion and believed he was a witness at the 2020 meeting, but that after talking about his interactions with the Chicago team the government told him he might no longer be a witness and might be a subject back then.

“I felt I had woefully ill-prepared for the meeting,” Gaynor said, adding that after the government told him about his status shifting he felt that he “was in significant peril.” He added, “I was told that after I confirmed that I knew the identity of the person who provided the information was Michael Sussmann.”

He said that his memory was refreshed after reviewing a to-do sheet he had written in September 2016, and that he told the prosecution in December 2020 that he remembered about the close hold. Gaynor said that by the conclusion of that meeting, he believed that his status had changed back to being a witness.

“I think that the facts I had found reestablished my credibility as a witness,” Gaynor testified.

Gaynor said he had a September 2016 meeting with Moffa during which he was told Sussmann had pushed the allegation to Baker, and was told Sussmann was an attorney for the Democratic National Committee. He testified he left the meeting with the impression “that he had been affiliated with the Democratic Party, but that he had come representing himself.” He said Moffa told him senior FBI leadership had put “close hold” on the fact that the information came from Sussmann and so it couldn’t be provided to the Chicago field agents. He said he couldn’t remember the reason for the close hold.

He said Moffa, Strzok, and himself talked about a close hold at some point.

Bosworth accused Heide of concealing Sussmann’s identity, but Gaynor testified, “The leadership did not allow me to share the information with the Chicago field office.” He said the close hold order “must have come down from” Baker and so the National Security Branch must have known. “I was told that it came from above, so above Pete Strzok,” he said.