What have all the sanctions produced? The Russian economy did not collapse, and Putin consolidated his power.

As America and the allies impose devastating sanctions on Russia for invasion of Ukraine, the Biden administration has outlined two objectives: destroy the Russian economy and create domestic pressure on President Vladimir V. Putin that would force him out of power.

The removal of Putin was enunciated as a prime objective of American foreign policy. President of the United States, Joe Biden, summed it up, “Putin cannot remain in power.”

Theodore Roosevelt, Richard Nixon, or Donald Trump would have asked what America’s national interest is being served getting into the Russia-Ukrainian morass. The essence of raison d’être is risk-benefit analysis. But Joe Biden doesn’t bother himself with such trifles; he paid no attention to Russia’s impact on the global economic system or Russian endurance and showed ignorance of Russian political culture.

At the time of this writing, the West has imposed six rounds of sanctions. The sanctions proved to be a double-edged sword. It may be debatable whom the sanctions hurt more, but what is not debatable is that the Russians have a much higher threshold for suffering than Western society.

The whole history of Russia is a history of suffering. Hence, no matter how bad the situation may be, Russians remember when it was worse. As a testament to stoic Russian endurance, Russian poet Nekrasov in his famous poem “Railroad” describing the inhumane conditions of builders of the Moscow-St. Petersburg railroad wrote:

“Don’t you worry about your fatherland….

Russian people endure everything that the Lord sends!”

What the Lord sent this time was not too bad in comparison. There is plenty of evidence that Russia’s economy successfully adapts to the new economic reality. Russians learn to live with the sanctions and, in some areas, to benefit from them. According to Bloomberg, Russia recorded the largest current-account surplus since at least 1994, as revenue from oil and gas export surged not despite the sanctions but because of the sanctions. It shouldn’t come as a surprise. The price of gas went up five-fold, and the price of oil rose by 60%, since the imposition of sanctions. So, even selling oil at a discount from artificially elevated prices, Moscow is making a killing.

It is not to say that Russia is unscathed by the sanctions. Russians experience shortages from paper towels to computer chips, from Coca-Cola to modern technologies and airplane spare parts. However, the goods and materials are not the necessities for survival. Food and energy are, and Russia enjoys an abundance of both. Hence, even if the West imposes twelve or twenty-four rounds of sanctions and keeps them in place for the next hundred years, they will not soften Moscow’s implacable determination.

Under a familiar Cold War banner – West against Russia — Putin rallied the country to support military operations against Ukraine. Indeed, according to the New York Times, Russians are giving Putin 83% approval for his actions (other sources estimate the approval rating around 70%). Ironically, the U.S. and NATO allies’ massive arms supply to Ukraine, especially the pending supply of German armor, invokes memories of the Second World War, validating Putin’s narrative and hardening Russian morale.

The KGB’s maxim, “To control masses, a leader has to instill fear and hope,” is still alive. NATO instills fear – Putin offers hope.

In this political environment, anyone who could be remotely qualify for the honor of being Putin’s political opponent, left the country in a hurry before being accused in collaboration with the enemy.

What have all the sanctions produced? The Russian economy did not collapse, and Putin consolidated his power.

America and its Western allies became a hostage of sanctions and found themselves trapped between their convictions and economic realities. From this untenable situation, they could see no exit and continued doing the same things expecting different results.

But there is more.

Thus far, Moscow has honored its contractual obligation to the extent possible under the sanctions. It has not used its leverage over the world economies yet. Putin may be waiting for the help of Russia’s most powerful ally – winter.

The U.S. currently imports over 50 percent of nickel, about 80 percent of platinum, 80 percent of cobalt, nearly 40 percent of copper, and some quantities of oil. Most of those materials come from Russia. Also, Russia and Ukraine export 25% of the global wheat and fertilizer supply. While neither of these countries exports wheat to the U.S. directly, their absence from the global market is expected to strain supply and push prices higher.

Moreover, not to mention oil and gas, Russia and Ukraine supply about 90% of the world’s highly purified neon gas used for manufacturing semiconductors and 40% of the global krypton supply. Due to the war, most Ukrainian industrial capacity has been destroyed or is under Russian control.

Amazingly, a sixteenth-century Italian sculptor Vincenzo de’Rossi in a statue of two heroes of Greek mythology, Hercules and Diomedes vividly communicated current America’s predicament. Hercules (Biden) is holding Diomedes (Putin) upside down, preparing to throw him, while Diomedes tightly grips Hercules’ genitals as if to say, “Are you sure, America, you want to throw me out? Who will provide the cheap energy, raw materials, and food components to the world?” 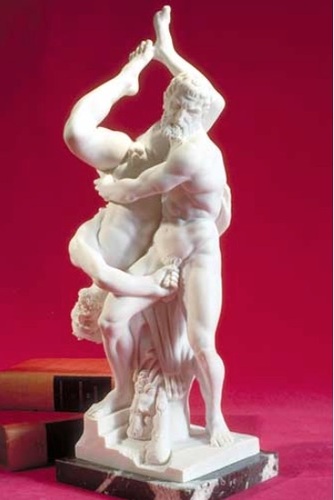 Given the interdependency of the world economies, the logical approach would be to stop economic masochism and a return to the period of Donald Trump’s political and economic sanity before we inflict irreparable damage to world commerce.

Unfortunately, there is no conceivable basis for such reversal. President Biden is not known for a logical approach. Biden’s logic is the logic of failure. Incapable of foreseeing impending catastrophes, the President doesn’t recognize the danger until it comes.

Alexander G. Markovsky is a senior fellow at the London Center for Policy Research, a conservative think tank that examines national security, energy, risk-analysis and other public policy issues. He is the author of Anatomy of a Bolshevik and Liberal Bolshevism: America Did Not Defeat Communism, She Adopted It. Mr. Markovsky is the owner and CEO of Litwin Management Services, LLC. He can be reached at [email protected]