The American political system faces a pandemic of rule-breaking that threatens constitutional government.

Next week is the start of the 2022 election season in Georgia with the party primary elections. All the party leaders involved in the controversy over allegations of election fraud in November 2020 are up for reelection. The other hot issue for Georgia’s voters is whether the 2021 election reform law will produce credible election results in 2022 and 2024, results that reflect the will of a majority of lawful voters. The odds are not good that the reform will work.

The movie 2000 Mules provides damning evidence of an organized plot to stuff election drop boxes in the 2020 election with “harvested” ballots – often in the dead of night. It’s all there on your computer screen when you stream the video. Does the 2021 law address this sort of widespread fraud?

The movie’s data analysts used the same techniques as the FBI to correlate cellphone geo-location data and maps to follow people (“mules”) who traveled from offices of “non-profit” leftist organizations to ten or more ballot drop boxes. Then they correlated it with the surveillance video of those boxes. (The video was required by election laws.) Some of the videos showed a “mule” take cellphone pictures of the ballots before stuffing the dropbox. Another mule wore latex gloves while handling the ballots. Afterwards she removed and discarded the gloves in a nearby trash can.

Georgia law prohibits anyone from depositing ballots in a dropbox except his ballot or those of a household member. The mules illegally stuffed enough ballots in Georgia to take the state’s electoral votes from Donald Trump. The movie’s producers proved that about 2000 mules operated in big cities in Arizona, Georgia, Michigan, Pennsylvania, and Wisconsin. It changed the election result in at least three of those five “battleground states.” That was enough to put Joe Biden in the White House.

Georgia’s response to charges of election irregularities in November 2020 was a law that reduced the number of ballot drop boxes and moved them into advance voting locations where they could only be used during business hours. Absentee ballots are now required to be authenticated with the voter’s driver’s license number, Georgia identification card number, or the last four digits of a social security number, along with a date of birth.

Unfortunately, these measures aren’t sufficient to confront systemic fraud. Georgia’s lawmakers wrote a law that apparently assumes no organized effort to “game the system” would occur in future elections. They ignored at least two telltale signs that absentee ballots had been abused.

First, the rejection rate for defective (and thus invalid) absentee ballots was a small fraction of previous elections when the increased use of absentee ballots by “novice” voters would naturally produce a higher rejection rate. With no standards imposed, many fraudulent ballots could be mixed in with the improperly completed ballots. 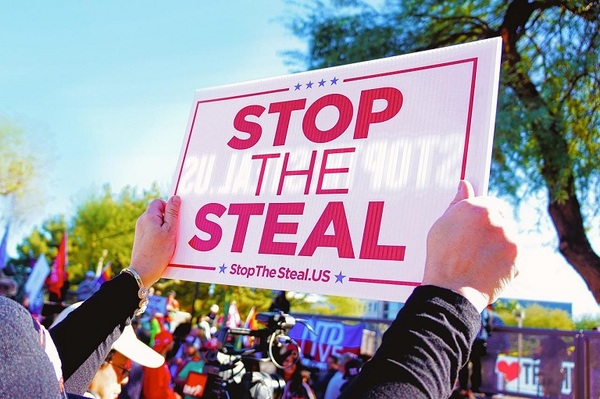 Second, the ballot counting in Fulton County (covering most of Democrat-controlled Atlanta) broke numerous rules. Republican election observers were prevented from closely observing the count. Even worse the counting of absentee ballots was stopped for no good reason at 11 PM and then resumed without observers. That occurred not only in Georgia but also in other battleground states.

It doesn’t take a Sherlock Holmes to deduce that several battleground states abruptly stopping a ballot count at the same time in the middle of the night is evidence of coordination and fraud on a grand scale.

The Georgia Bureau of Investigation refused to investigate when given some of the 2000 Mules evidence of ballot fraud with the lame excuse that it did not show “probable cause” to charge anyone with a crime. The GBI’s job is to investigate suspected crimes, but for the 2020 election it wanted the case presented to it on a silver platter so all it had to do was write the charge sheet.  Georgia’s governor, Brian Kemp, and its Secretary of State, Brian Raffensperger, showed a similar level of indifference to evidence of fraud even when the True the Vote organization (a producer of 2000 Mules) informed them it had evidence from one of the mules.

Some Republican politicians seem to assume that all their political opponents will play by the rules. They assume that no one will organize a conspiracy to “game the system” and win an election with illegal ballots. Democrats “argue” that election fraud is rare and to discuss evidence of fraud is “disinformation.” In response to 2000 Mules they might offer only: “Who are you are going to believe? Me or your lying eyes.”

Unfortunately, they don’t even go that far. The Democrat politicians and media allies are dumping the evidence in 2000 Mules down the memory hole just like the censors in George Orwell’s novel 1984.

The American political system faces a pandemic of rule-breaking that threatens constitutional government. Left-wing “Antifa” takes over downtown Portland and tries to burn down the federal building. Many are arrested and practically all of them are released with charges dismissed. Millions invade our southern border and, instead of deporting them, the Biden administration puts them on charter jets to fly in the middle of the night to other states.

Someone leaked a draft U.S. Supreme Court opinion that would overrule Roe v. Wade. For days thereafter abortion supporters demonstrated outside the homes of conservative judges on the Court. Federal law makes it a crime to demonstrate outside the residence of a judge aiming to influence the judge’s decision. No one was arrested. At the same time stories leaked that the FBI is investigating as suspected domestic terrorists parents who spoke up at school board meetings against Critical Race Theory “lessons” and the sexualization of grade-school education.

Georgia’s 2021 election reform law will do little to stop organized election fraud in the 2022 and 2024 elections. I am not a fraud artist, but I can imagine this scheme. You get the names of people on the voter rolls who have not been voting in recent elections. They are apathetic, dead or they moved out of the county. You data mine their SSN’s and date of births and then apply for an absentee ballot. The signature on the absentee ballot will match the signature on that application. Then you stuff the mailbox at the local post office with the manufactured “votes.” Bingo! You stole the election.

All the constitutional officers in Georgia (governor, secretary of state, and attorney general) deserve defeat in the primary election on May 24th. They did little to investigate election fraud in 2020. They did not push through systematic anti-fraud legislation.

Elections that are vulnerable to fraud schemes are not credible elections, whether the fraud was successful or not. Both Canada and France have stricter election systems than the U.S. It’s a disgrace that we can’t do better.