How Biden has crossed the line into serious legal jeopardy.

American has a two-tiered justice system. If you are liberal and vote Democratic, you can get away with anything. Hillary Clinton is proof of that. If you are conservative, Republican, and a Trump supporter, you can’t even get away with scratching your own behind. But for argument’s sake, let’s suppose we have a single standard for justice. In that case, here are five unassailable reasons that justify impeaching President Biden. This is not meant to be a complete list, but it will do for starters.

Evidence exists that during Joe Biden’s tenure as vice president, access to his office was sold by Biden’s son Hunter to China, Russia, Ukraine, and others willing to cough up huge sums of money. American foreign policy was impacted by those transactions. Biden himself bragged openly that he stopped Ukraine from investigating Hunter in return for a billion dollars in U.S. aid.

Where is the evidence of Biden’s corruption? First there is the New York Post article that broke the story. Then there is Peter Schweizer’s well-researched book, Secret Empires, that traces the Biden Crime Family’s complicity with the corrupt Ukrainian energy company Burisma. Next, we have the incriminating emails from Hunter Biden’s laptop. Let’s not forget the video where Biden brags about extorting favors from Ukraine. And finally, there is the testimony of former Biden business partner, Tony Bobulinski.

Bobulinski’s testimony refuted Joe Biden’s denial that he was aware of Hunter’s slimy business ventures. Joe knew about his son’s dealings, participated in them, profited from them, and lied to the American people about it.

Biden has abused his office by violating the laws he has sworn to defend. He has undermined national security by opening the southern border to millions of unvetted, low-skilled, uneducated, third-world economic migrants, many of whom are known terrorists, criminals, and people infected with COVID.

The open border policy “is an inside attack on our democracy,” said former Trump policy adviser Stephen Miller. “The president is working systematically to allow people to invade our country against our laws to consume public benefits, to take American jobs, and to threaten public safety.”

Adding insult to injury, Biden is shipping hordes of illegals to secret destinations without informing the American public. The Pentagon has confirmed that it is using Laughlin Air Force Base in Texas to fly illegal immigrants to undisclosed parts of the country. We don’t know where they are going or what happens to them when they get there.

If millions of aliens are allowed to enter the U.S. illegally, and sanctuary cities and states can openly disregard federal statutes, we no longer have a country. The economic and social costs of Biden’s policy will tear the country apart.

Article III of the U.S. Constitution states: “Treason against the United States shall consist… in adhering to their enemies, giving them aid and comfort.” By supporting sanctuary jurisdictions and refusing to pay for the wall, Biden is giving aid and comfort to aliens who show contempt for our laws and sovereignty and who, by definition, are enemies of the United States.

3. Biden is waging war on the energy sector to deliberately destroy the American economy.

Under Trump, the U.S. became energy independent. Biden reversed Trump’s sensible energy policies, causing the worst inflation in 40 years, runaway gas, food, and heating prices, and looming recession. As far back as the 2020 election, Biden has boasted about his intention to destroy our reliance on fossil fuels. 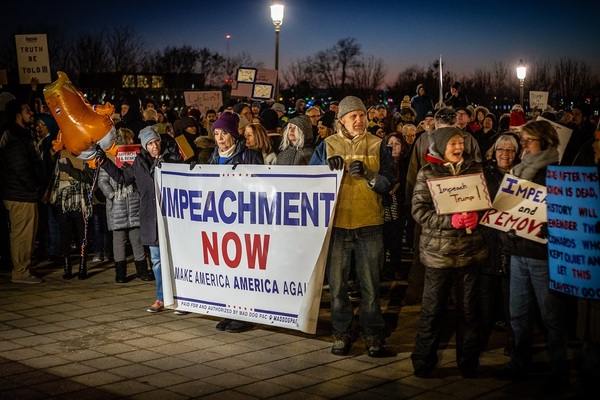 “Harvesting of fuel was cut back drastically,” said Bill O’Reilly, “and that caused the price of gas at the pump to rise, and that lit inflation, as all other goods went up in price as well because they are trucked to the stores and businesses. That is all on President Biden.” Now millions of Americans can’t afford to put food on the table.

Biden’s decisions are informed by his surrender to the extreme left wing of the Democratic Party. Their plan is to destroy the American economy in order to bring about a Marxist, socialist tyranny controlled by the unaccountable bureaucrats of the Deep State. We cannot tolerate a president who seeks the transformation of America into another Venezuela.

4. Biden is directing the enforcement branches of the federal government against his political enemies.

Biden believes that “domestic political extremism” is “the most urgent terrorism threat” facing the U.S. “The Biden administration declared that the ‘most lethal elements’ of today’s domestic terror threat are political conservatives,” said Tucker Carlson. Biden has compared Americans who disagree with him — at least half the country — to racists and terrorists.

Consequently, Biden is empowering the DoJ and FBI to go after Republicans. “The FBI is now an organization solely focused on destroying the domestic enemies of the Democratic Party,” said talk show host Jesse Kelly.

Biden is also enlisting the media in his war against political opponents. “What Joe Biden is telling media companies to do today is to censor their content so it doesn’t contradict his decrees,” said Tucker Carlson. “[Biden is calling for] censorship of political opinions. What you’re seeing here is far more dangerous than the domestic terror threat they’ve been bloviating about. It contravenes the First Amendment.”

Biden is presiding over an inquisition against white Americans. He has expressed his support for Critical Race Theory, which argues that the U.S. is inherently racist, that minorities are oppressed by whites and especially white men, and that white people achieve their economic and political objectives at the expense of people of color. CRT is in direct opposition to the aims of the Civil Rights movement and Martin Luther King’s emphasis on judging people based on the quality of their character rather than the color of their skin.

Blaming white supremacy has become the new national sport. Under the guise of ending oppression, Biden and the Democratic Party want to remake whites into the new underclass. Giving special treatment to any one group is in violation of the equal protection clause. It is also the worst kind of racism. Blaming current social problems on alleged white oppression heightens racial tensions and keeps the country divided. Division seems to be Biden’s objective. For that reason alone, he should be impeached.

Ed Brodow is a conservative political commentator and author of nine books including his new #1 Amazon Best Seller, AMERICA ON ITS KNEES: The Cost of Replacing Trump with Biden. His website is www.edbrodowpolitics.com.